Sure, a golden eagle can theoretically snag a baby. But the Haast's eagle hunted 12-foot-tall monster birds. 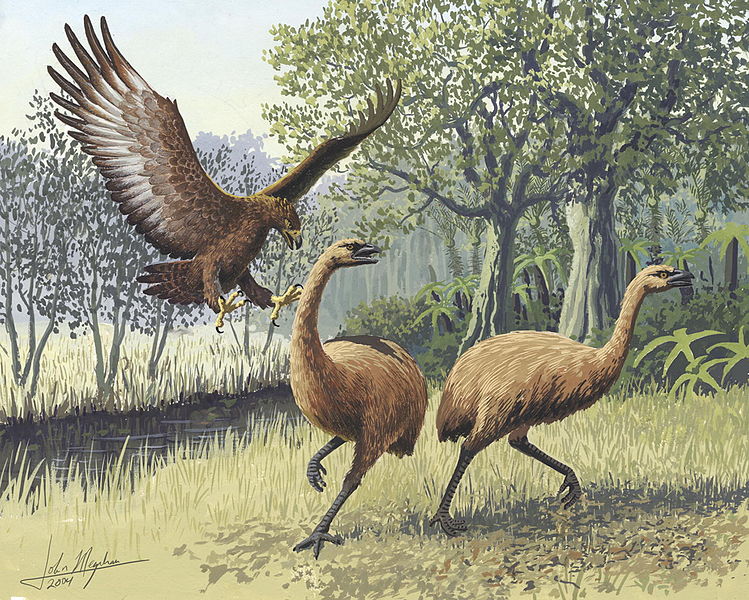 Last night, a video supposedly showing a golden eagle swooping down to pluck a toddler from a Montreal park–it was unsuccessful, luckily–hit the internet. Great video! This morning, avian experts both amateur and professional began weighing in, saying the video was doctored, that the bird in question was not actually a golden eagle, that the bird’s behavior is unusual and that, all in all, it’s probably fake.

So, yes, perhaps a golden eagle didn’t attempt to grab a Quebecois baby. But this whole thing reminded us that raptors–the larger family of birds of prey including eagles, hawks, vultures, and owls–are crazy strong and also sometimes crazy big. So let’s take a look at the craziest, strongest, and biggest raptor that ever existed: the Haast’s eagle of New Zealand.

The Haast’s eagle is extinct now, and has been since, probably, around the year 1400, soon after the Maori first settled the South Island of New Zealand. (It has been reported as seen a few times since then, including once by “noted explorer” and generally reliable source Charles Edward Douglas, but, as you’ll see, that’s pretty unlikely.) The Haast’s eagle was outrageously big and strong. Its wingspan was comparatively short, given its body size, at around nine feet long. I say “comparatively” because that’s about as long as the longest wingspan of any extant raptor, including the golden eagle (which is huge) and the Steller’s sea eagle (which is also huge).

The golden eagle, which is very common, has been known to hunt wolves and deer. It is a fearsome and formidable hunter. And it was about half the weight of a Haast’s eagle, and nowhere near as powerful. The golden eagle hunts deer? Pretty impressive. The Haast’s eagle hunted 12-foot-tall monster birds, striking at estimated speeds of 50 mph with the force of a cinder block dropped from an eight-story building. It didn’t carry off prey, like that likely-fake Montreal golden eagle, but instead used its talons–the same size as a tiger’s claws–to kill on the ground. One talon would grab the monster bird by the pelvis, and the other would deliver a crushing blow to the neck and head. The Haast’s eagle’s genus name is _Harpagornis_–a combination of Greek words meaning “grappling hook” and “bird.” Yeah.

The monster birds the Haast’s eagle preyed upon were called moa, huge ratites related to other big flightless birds like the ostrich and emu. Both the Haast’s eagle and the moa evolved due to what’s called “island gigantism,” a phenomenon in which animals isolated from other, more diverse populations of animals end up a much larger size than they’d be on the mainland. New Zealand, before the Maori arrived, had no land mammals at all, due to the impossibility of mammals actually getting to the islands. So birds and reptiles ended up filling the ecological niches that would have typically been filled by large mammals. The moa was a grazer, taking the place of ungulates like deer or cattle. The Haast’s eagle took the place of the apex predator that hunts the grazers. It was, evolutionarily speaking, the tiger of New Zealand.

The Maori hunted the moa to extinction by around 1400, barely a hundred years after they arrived at New Zealand. No other prey was large enough to sustain the massive Haast’s eagle, so they quickly died out as well. The Maori knew the bird as Pouakai, made use of its bones, included it in their stories, drew pictures of it on cave walls, and occasionally, probably, ate it. The bird was certainly big and strong enough to prey on humans but there’s no sign that it ever attempted to hunt the Maori.

Evidence of the Haast’s eagle were first found in caves in the 1870s and then studied in the 1890s by Julius von Haast, a German scientist. Amazingly, it’s found to be related most closely not to other huge eagles like the golden eagle but to the little eagle of Australasia, a tiny raptor about the size of a peregrine falcon. Island gigantism! Crazy! Maybe if they hadn’t gone extinct 500 years ago, we’d be watching a possibly faked YouTube video of them today, carrying off a full-grown Quebecois man.