After Bart Jansen’s cat Orville was killed by a car, the artist had the animal taxidermied and then, “after a... 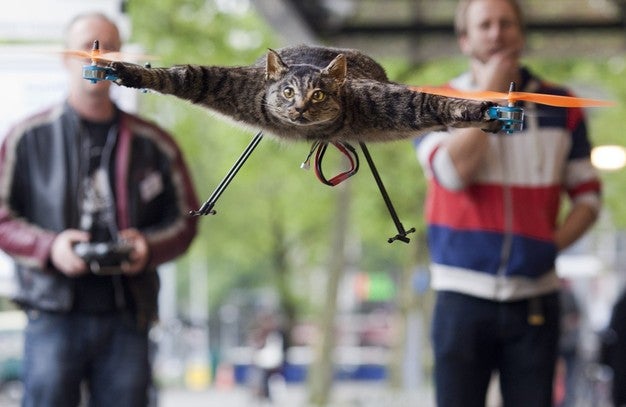 The Orvillecopter by Dutch artist Bart Jansen (R) flies in central Amsterdam as part of the KunstRAI art festival June 3, 2012. Jansen said the Orvillecopter is part of a visual art project which pays tribute to his cat Orville, by making it fly after it was killed by a car. He built the Orvillecopter together with radio control helicopter flyer Arjen Beltman (L) . REUTERS/Cris Toala Olivares (NETHERLANDS - Tags: SOCIETY). STRINGER
SHARE

After Bart Jansen’s cat Orville was killed by a car, the artist had the animal taxidermied and then, “after a period of mourning,” converted the stuffed kitty into a radio-controlled quadcopter. The video is below.

It’s not clear whether or not Orville always dreamed of being a flying cat, but let’s assume that he did, and that this is the ultimate demonstration of Mr. Jansen’s respect for his deceased pet. Orville is currently on display in Amsterdam, at the Kunstrai art festival.