Unlike so many of us, they actually plan for the future. 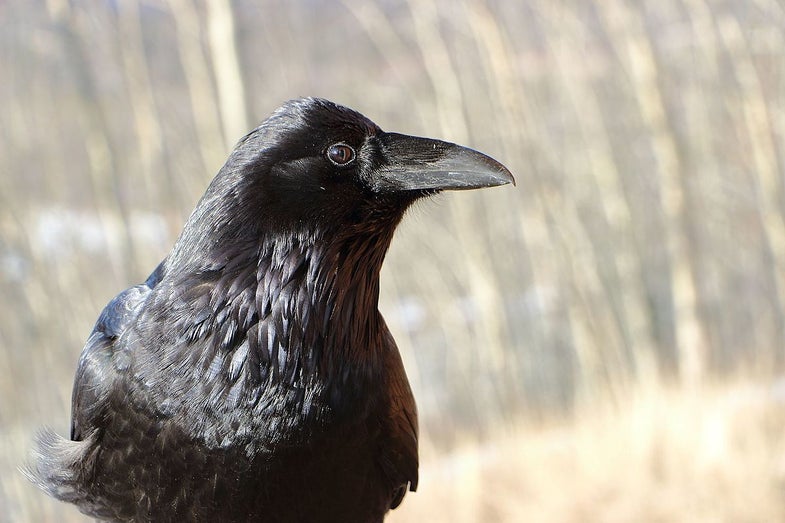 A flock of ravens ravaging a carcass may technically be called an unkindness, but the real unkindness is using that term. Everyone is always hating on the smarty pants, but ravens are not terrifying. Do they have sharp, curved beaks that they use to tear dead animals to pieces? Yes. Are their calls reminiscent of a creepy laugh? Most definitely. But just because they’re masterminds doesn’t make them evil—it just makes them awesome.

Ravens can solve puzzles, trick other animals into helping them out, and communicate with each other at a level even apes can’t match. And now we know they can hatch plans. These aren’t dastardly plans to overthrow humans in a battle for control of the Earth (we hope)—they’re plans to get better food for themselves. It’s like the marshmallow test—more on that in a minute—but for birds that have more self control than most children.

This latest revelation comes courtesy of two cognitive scientists at Lund University in Sweden who literally put ravens to test. They published their findings on Friday in the journal Science. Up until now, we knew that ravens had some ability to plan ahead for their own food needs because they hide caches of food to dig up later. Then again, squirrels store food in the ground for later and they’re, well, not the smartest. They forget about 75 percent of their nuts, planting millions of trees in the process. They’re accidental environmentalists. And if moronic squirrels can be biologically programmed to cache food for later, maybe ravens aren’t as smart as we thought.

Except obviously they are.

Ravens, as it turns out, will often choose to forgo a tasty morsel now in favor of getting access to a better treat later. Faced with a food tidbit and a tool that they know can open a box containing more tempting food, they will generally choose the tool—even if they don’t have the box yet. They’ve learned that when researchers present them with the box in 15 minute’s time, they can use that tool to unlock their prize. That’s forethought right there. Even small children often choose to eat one marshmallow immediately rather than wait a few minutes for more marshmallows, and all that experiment makes the participants do is sit there being cute.

This shouldn’t come as such a shock. Ravens also steal from each other by watching competitors hide food, noting the location, and returning later to dig up their spoils. And because they get stolen from, some ravens will actually pretend to hide food to throw thieves off the scent. What’s more, they can tell other ravens where to find a juicy, rotting carcass and team up to scare off their competitors. That ability—to communicate information about a distant location—is shared only by ants, bees, and humans. Note that great apes and monkeys are not on that list. Plus, ravens can apparently deceive one another if it means keeping a food source a secret. They can also call wolves over to a carcass that hasn’t broken down enough yet so that the canines can rip it apart, leaving more convenient scraps for the birds to scarf down.

If all that doesn’t make you love and embrace our raven overlords, nothing will. These birds are geniuses in their own right—so what if their look is a little goth? Their intelligence isn’t to be feared, it’s to be revered. Ravens for President 2020.