It's because they're forced to eat human leftovers. 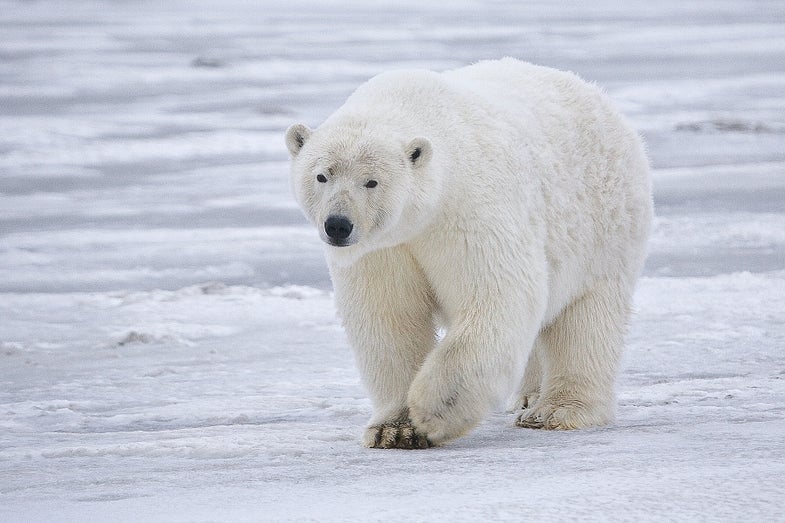 In a recent study in Polar Research, scientists at the University of Connecticut and the United States Geological Survey found that mercury levels measured in Southern Beaufort polar bears’ hair have actually declined significantly in recent years, particularly in male polar bears. Surprisingly, despite worries about increasing pollution, mercury levels dropped by about 13 percent per year in samples collected from 2004 to 2011. The decrease was insignificant in female bears (4.4 percent), but much higher in male bears (15 percent). “We see this very substantial drop in polar bear mercury concentration over a relatively short period of time,” says Melissa McKinney, first author of the study and assistant professor at the University of Connecticut.

At first glance, this is promising; after all, mercury is toxic and can cause problems in the brain, kidney, liver, and immune system. And since mercury is found in power plant emissions, man-made pollution has been causing spikes in environmental levels.

But don’t get too excited—these declines are not necessarily due to environmental clean-up. Instead, the researchers found that the declines were driven by changing food sources changing habitats. The Southern Beaufort Sea used to be frozen nearly year-round, with the exception of the warmer months between July and October. As Arctic temperatures have risen over recent years, the sea ice has receded and the polar bears’ traditional habitat has slipped out of reach—and along with it, their food sources. In the early 2000s, Southern Beaufort polar bears fed on fellow ice-dwelling ringed seals and only a handful of bears wandered onshore, usually for no more than two weeks. But with the ice sometimes nearly 400 miles away from shallow waters, polar bears are now spending almost two months on coastal land and have turned to new food sources.

Enter humans: subsistence hunters from Arctic communities leave bowhead whale carcasses on shore, and these ready-to-eat meals have become popular among polar bears. And they might actually be helping decrease the bears’ mercury levels, at least among males who aren’t deterred by the massive size of the whales. Prior studies have connected the blubbery diet to polar bears’ improved body condition (high BMIs). This is in turn associated with lower mercury levels. That could be because the food itself contains less mercury, or because the mercury is being stored in tissues and isn’t released until the bear metabolizes them for extra energy—like when food is scarce, or when the bear has a lower BMI. That’s less likely on a whale diet, says study author Todd Atwood, a wildlife biologist at the United States Geological Survey’s Alaska Science Center.

Toxins like mercury often “biomagnify”; once they’re consumed by an organism low on the food chain, subsequent predators absorb more and more mercury from all of their prey. This has traditionally put polar bears at risk, as they sit atop the Arctic food web. But since plankton-feeding bowhead whales are lower on the food chain than ringed seals, there are fewer steps in their food chain for the mercury to accumulate.

So, the bears may have healthier mercury levels—which is good—but it’s because they are changing their behavior to adapt to losing their traditional home and food sources. That’s less good. “The study points to the need for us to consider climate change more broadly,” McKinney says. “We know that polar bears are this iconic Arctic species. They can also tell us not only how ice loss can impact habitat, but also how climate change can change the risks posed by other stressors.”

These indirect effects on behavior could be crucial, Atwood says. It’s a chain of events: the sea ice recedes, so the bears have to go somewhere else. Where do they go? On shore. And what do they do on shore? Follow their noses to find something to eat.

And their noses usually lead them to human settlements. Southern Beaufort bears are pretty lucky that they have this food source to exploit and that the humans are tolerant, Atwood says, but there are potential concerns on the horizon. He points out that coming ashore is a learned behavior; only 20 percent of the polar bears come on shore so far, but he expects that proportion will increase with time, and there will soon be more of them competing for a fixed amount of food.

Not to mention the increased potential for conflict between humans and bears. “When they’re on shore, they’re closer to human communities,” McKinney says. “They’ll have interactions with other species they wouldn’t regularly have access to.” She says future studies will focus on other potential ramifications of the bears coming on shore, such as exposure to pathogens and parasites carried by humans.

If coming on shore makes the polar bears healthier, their increased survival and reproduction might temporarily slow the decline in population due to climate change. “With polar bears, what we’re trying to do is buy time to stop the growth of greenhouse gases, rein them in to a reasonable level, and stop the loss of the sea ice habitat,” Atwood says.