Talk about having your heart in your stomach... 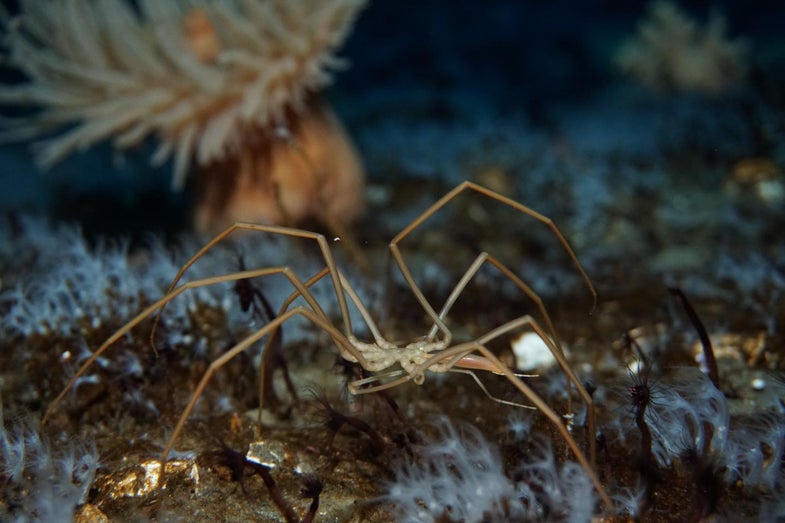 Many of us think with our stomachs, but researchers on an Antarctic expedition have discovered a creature that uses its gut for a heart. This species of sea spider ripples its digestive tract to deliver oxygen to the cells in its body.

Normal spiders and insects in general don’t have veins or blood like you and I. Instead, a substance called hemolymph just sort of washes over their cells to deliver oxygen and energy. A tube-shaped heart keeps all that fluid moving around. Sea spiders, those sometimes 10- to 12-legged weirdos who live in the Mediterranean and Caribbean seas, and can grow up to three feet wide in the polar oceans, of course do things differently.

While staring at sea spider blood and guts under a microscope (for some species, you can see right into their living bodies), biologist H. Arthur Woods of the University of Montana, Missoula, noticed that the arthropod’s heart beats weakly. Whereas its heart only pumps hemolymph to the creature’s main body, its guts were working overtime.

Spider guts, and our own, use squeezing motions to help break up food and move it along the digestive tract. In sea spiders, those waves of peristalsis were particularly strong.

“My ‘aha!’ moment was to consider that maybe all that sloshing of blood and guts was not about digestion but instead about moving respiratory gases around,” Woods said in a statement.

In a series of experiments and observations, he and his colleagues confirmed that hypothesis in 12 species of sea spider, showing that their guts essentially function as cardiovascular systems. That helps to explain why, unlike true spiders, sea spiders’ guts extend out of the abdomen and into their legs—it probably helps to keep the nutrients moving. The work is published today in Current Biology.

It’s certainly a strange way of doing business, but not entirely unheard of in the animal kingdom. Dragonflies use contractions and relaxations of their rectums to pull in, er, maybe not-so-fresh air. The study authors note that Cnidaria (a group that includes jellyfish and coral) and Platyhelminthes (flatworms) have gastrovascular systems that carry out both the digestive and circulatory functions. These systems are the evolutionary equivalent of killing two birds with one stone, and probably help the animals to save energy.

The sea spider’s weird way of pumping hemolymph is a great example of how nature can find many different ways to solve a problem. Next, the researchers hope to more closely investigate how oxygen is transported in other sea creatures with complex guts, including fish lice and other crustaceans.