Squirrels are so organized it’s nuts

They use complex memory strategies to organize their stash. 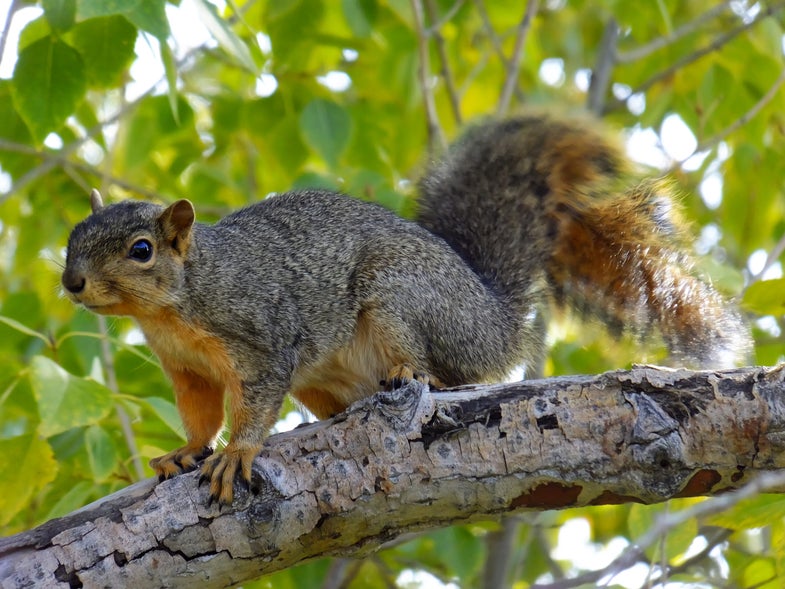 Squirrels are smart. One that runs afoul of a homeowner has to be relocated several miles away, preferably across a body of water, or else it will resolutely find its way back home. And this isn’t the only way that the rodents show their savvy. In a study published today in the journal Royal Society Open Science, researchers at the University of Berkeley present evidence that eastern fox squirrels, a common sight in North America, organize the 3,000-10,000 nuts they stockpile each year by variety, quality, and possibly even personal preference. Under certain conditions, the squirrels may even use a complex cognitive strategy called “chunking” to organize their nut booty.

The average human can hold about four items in their working memory – the short-term memory we rely on to recall the steps necessary to cook a recipe, for example, or to perform the mental math it takes to hand over cash at the checkout line. If four items seems awfully low, that’s because humans have learned to hack that limit through a process neuroscientists call chunking. Chunking explains why a series of numbers—229541326—is much easier to remember as 229, 541, 326. Consider a grocery list. Sure, you might just scrawl the products you need out onto paper in whatever order you think of them. But what’s actually easier to commit to memory? A straight list of items:

Or one where things are clustered into categories?

“Squirrels may use chunking the same way you put away your groceries. You might put fruit on one shelf and vegetables on another. Then, when you’re looking for an onion, you only have to look in one place, not every shelf in the kitchen,” co-author Lucia Jacobs, a cognitive biologist at University of California, Berkeley, said in a statement.

Jacobs and her colleagues came to this conclusion by presenting 45 wild fox squirrels with a series of 16 nuts from four different species—hazelnuts, almonds, pecans and walnuts. The nuts were presented either in runs of four or in a what’s known as pseudorandom order—a mathematical method for generating a sequence that’s pretty close to being truly random. The squirrels either collected the nuts from different locations, or all in the same spot. Then the researchers used GPS to track the squirrels from their starting location to their stash, and created a map of their movements. That’s when they discovered that squirrels spatially chunk their nut hoards: they burry them in different locations depending on their individual properties.

“This is the first demonstration of chunking in a scatter-hoarding animal, and also suggests that squirrels use flexible strategies to store food depending on how they acquire food,” lead author Mikel Delgado said in a statement

But the squirrels don’t use chunking all of the time—only when the nuts are foraged from the same location. Rather than caching nuts by type, squirrels that gathered nuts from multiple locations actually seemed to avoid storing in areas where they had already buried nuts, suggesting that in those cases, they were probably using a different organizational system. In any case, it’s clear that most of us underestimate the cognitive capabilities of these crafty critters. It’s only a matter of time before they discover bullet journaling.