Why scientists are racing to uncover the Greenland shark’s secrets

What’s cooler than the Arctic ocean? The sharks that live there. 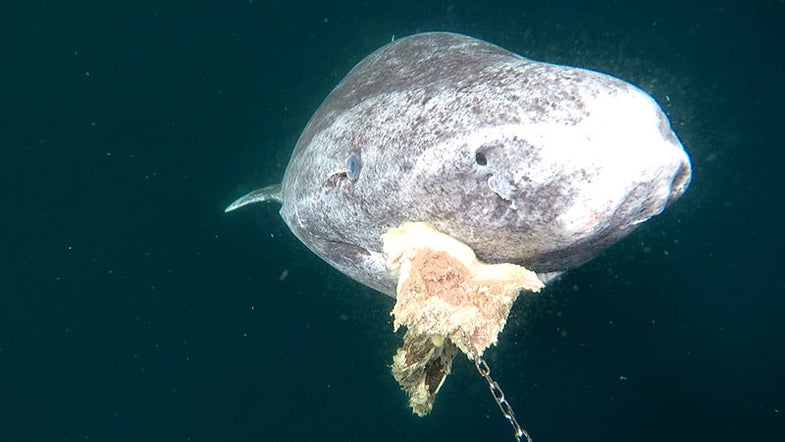 Brace yourself. To human senses, the gelid waters of the Arctic and North Atlantic oceans are beyond chilling. Because sea water is salty, the waters can actually reach temperatures below what we think of as freezing (as low as 28.8 degrees Fahrenheit instead of the usual 32) and remain liquid. Without protective gear, the human body can withstand maybe 15 minutes of these temperatures before succumbing to unconsciousness; 45 minutes before death.

And yet somehow, the Greenland shark—a species that can reach more than 15 feet in length and a scale-busting 880 pounds—calls these waters home. These cartilaginous fish do more than tough out frigid temps: they also resist diseases common in humans, like cancer, and may hold secrets to how we might live longer, healthier lives.

“This particular species of shark is fairly understudied, and is not particularly well known to research—or to anyone except for the Greenlanders,” says Holly Shiels. A physiologist at the University of Manchester, Shiels is fresh off an Arctic expedition where an international group of eight scientists aimed to change that.

The elusive shark first attracted widespread attention last year, when it graced the cover of the journal Science. Greenlanders—Inuit people who share a lineage with the native populations in the American Arctic—had long said that the Greenland shark could live for ages. But last year, Danish researchers confirmed their status as the longest-lived vertebrate (that we know of, anyway). They can live up to 400 years, which raises many questions. Questions, says Shiels, like: “Why don’t they have cancer if they live for that long?”

Cancer is a disease of replication. When our cells copy themselves, they sometimes introduce errors—either because of damage or because they’ve reached the end of their natural lifecycle—that can turn into cancer. Generally speaking, the longer you’ve been alive, the more your cells have replicated. That means more opportunities for these kinds of errors to pop up, which is why cancer is more common in adults. But Jeanne Calment, who holds the record for longest-lived human at 122 years, was a mere child in comparison to the Greenland shark. These creatures don’t appear to hit puberty until they’re 150 years old. We’re not sure how the Greenland shark can accomplish this feat, we just know that it does.

“I came in because they wanted somebody to look at the cardiovascular system,” says Shiels. “Heart disease is a disease of the aged. We know that every year you live past 65 increases your incidence of having heart disease by an exceptionally, ridiculously high rate. So how do these animals continue to beat for 400 years? Do they have fibrosis? Do they have arrhythmia? Do they have any of the things that we associate with aging in human hearts?”

Shiels notes that the purpose of the trip, which she and her colleagues are chronicling after the fact in a series of shark diaries, was simply to observe—to help fill in the blank spots in our understanding of the Greenland shark. Researchers like Shiels are in a race against time to learn as much about the shark as possible, both to help protect the species and to see what aspects of their physiology can improve our understanding of human health and wellbeing.

Why the rush? Because escalating fishing pressures in the North Atlantic and the Arctic mean that increasingly, the Greenland shark has been showing up as bycatch; the unwanted creatures caught on fishing hooks and nets. And juvenile Greenland sharks are scarce. Given that it can take up to 150 years before a female shark can reproduce, we shouldn’t expect that to change radically any time soon. So we might be removing sharks from the ocean at a rate faster than they can be replaced.

“When you think of big team efforts, you don’t think of physiology,” says Shiels. “So, it’s quite exciting that there’s a new burgeoning field of conservation physiology, which is understanding how animals work or how they function across all levels of an organization to help inform conservation plans.”

This fear that human pressures may be accidentally harming the Greenland shark has landed them on the IUCN Red List as near threatened. It’s a fact that’s even more disheartening when you consider that we used to actively hunt these creatures for the thick layer of fatty oil that surrounds their liver.

“This particular species was completely overfished in the 1900s to 1940 for its liver, which was used as machine oil in the wars,” says Shiels. “Because they were so massive, their livers were absolutely massive. And because they’re living up in the cold waters, they deposit a lot of fat in their livers. So they were particularly great for this machine oil stuff.”

According to Shiels’ expedition and others like it, there are plenty of cool things to learn about the Greenland shark.

Take their hearts: they beat once every 12 seconds. The human heart, in comparison, beats at least once a second when we’re at rest (and even faster when we’re active or simply young). Our hearts use fast beats with low output—each beat sends only a tiny amount of blood circulating throughout the body. The Greenland shark squeezes a heart’s worth of blood through the body in one mighty pulse, followed by a 12-second pause to refill.

The heart isn’t the only part of the Greenland shark that moves slowly. Their tails are just as poky. On the expedition, a Japanese researcher affixed a biologger, sensors that can collect all sorts of information about living creatures, to some of their tails.

“Their tail beat is the slowest tail beat from extension to extension that has been recorded, even if you scale for size and temperature,” says Shiels.

And while some arctic animals are suffering due to pollution that makes its way north on ocean currents, the Greenland shark seems mostly unscathed. Shiels recalls one study that tested tissue samples for known pollutants to see if they became concentrated within the Greenland shark.

“The interesting thing,” says Shiels, “is they don’t seem to. But one study is not the whole picture.”

Which is exactly why researchers need to continue braving the icy waters to learn more about this shark and its habitat. If we’re lucky, perhaps one day we can steal some of its longevity secrets for ourselves. But if we’re not careful, human behaviors could be the one thing capable of wiping the resilient creature out for good.