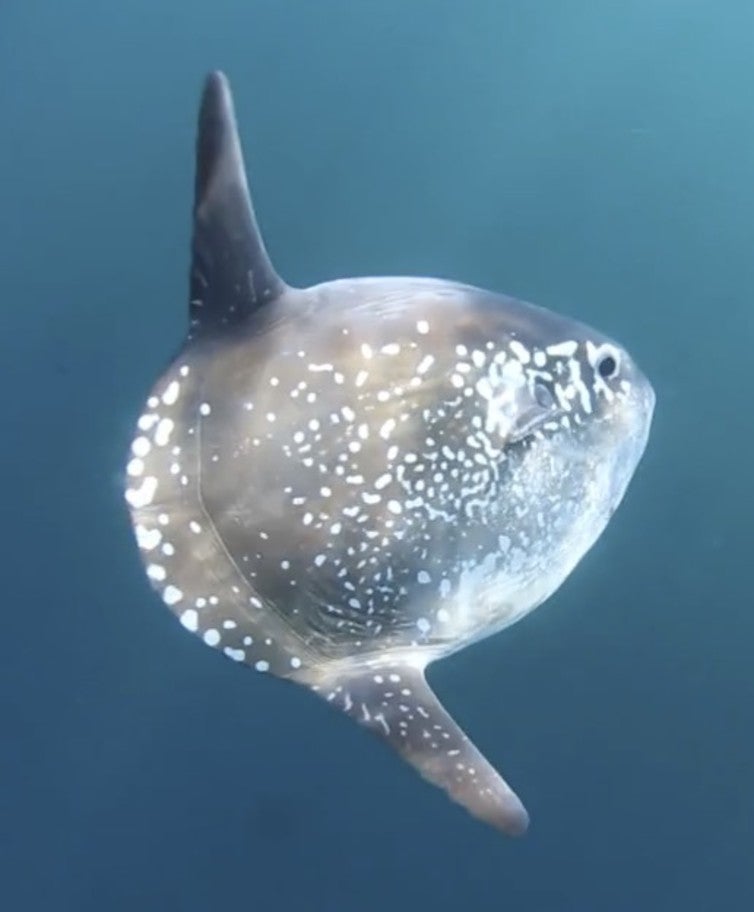 Sometimes nature gives you a gift. This one looks like a two-year-old tried to sculpt a fish out of clay but got distracted halfway through. Its common name is the sunfish, but the German version is more accurate: Schwimmender Kopf, or “swimming head.”

Here’s a still image so you can fully appreciate just how absurd this creature is:

The mouth: agape. The fins: haphazardly stuck onto the end. The teeth: fused into a beak-like mouth. The butt: oddly fin-less. Embrace the strangeness, then take a moment to appreciate that these bizarre beauties can grow to be over 10 feet long and 14 feet tall—because their fins are placed vertically, for some unknown evolutionary reason. They can weigh over 5,000 pounds.

And now, instead of just three known species of sunfish, the world has been graced with four.

Sunfish are notoriously ridiculous, but they’re also notoriously difficult to capture and study. It took the biologist who recognized this new species four years of examining sunfish samples to ensure she had really found something novel. Genetic samples kept suggesting that there were four species of sunfish, when only three had been recognized. To verify the fourth’s existence, she and her colleagues had to actually go find one of the darn things.

This new species, the Mola tecta (or Hoodwinker sunfish), is a lot like its relatives in that it looks like half a fish. It also sports a characteristically prominent eye that stares blankly at the world. It’s different in that it’s less lumpy.

The lack of bulbous bumps on its pseudo-butt do give it a more streamlined profile—a small one might almost look cute. Baby sunfish, however, do not look like tiny version of their parents. They start out less than an inch long and develop quickly into tiny fry, which look like something between a pufferfish and blob of jelly.

Pufferfish are close relatives of sunfish, so it’s not surprising that there’s a strong infantile resemblance. Sunfish fry even swim like pufferfish. As grown-ups, they use their ridiculously oversized fins to gently scull the water. The clavus—a pseudo-tail that evolved in place of the tail fin found on most fish—helps them steer. Sort of. The sunfish is not exactly a graceful swimmer.

Those enormous vertical fins sometimes get them mistaken for sharks. But sunfish are gentle, blobby giants who like to sunbathe just like you. They don’t spend a ton of time at the surface (they can dive up to 2,000 feet) so when they come up, they rest with their wide, flat bodies spread out to catch the sun’s rays. They do it more to warm their bodies and allow sea birds to eat parasites off of their mucus-y skin than to get a nice tan, but hey.

That’s exactly what the sunfish featured in this 2015 video of a Boston man flipping out over a “sea monstah” was doing. It’s an incredible display of awe, fear, curiosity, and regional accents:

Sadly, since sunfish are fairly isolated creatures, you’re most likely to see one for yourself as it’s ripped apart by seals along the California coast. It’s not clear whether seals (and sea lions) try and fail to eat the fish or if they just like to kill for sport, but the mammals seem to enjoy tearing sunfish fins off and then abandoning the body. Without their fins, the poor sunfish drift to the bottom of the ocean, alive but unable to swim back up. Helpless, they’re slowly eaten by other sea creatures. And so ends the life of the peaceful sunfish. Gone, but not forgotten.