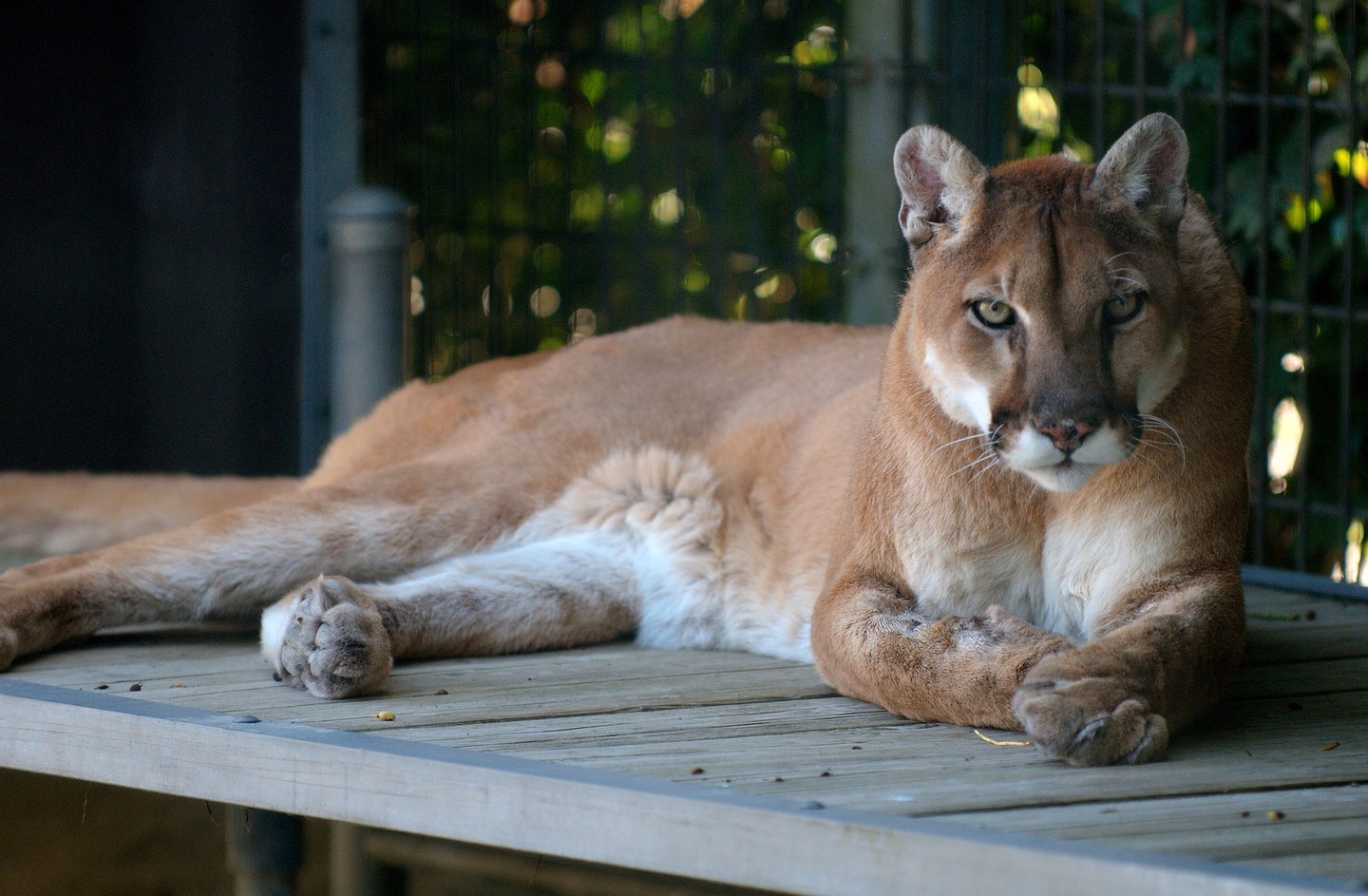 Talk radio can be scary for humans, but for mountain lions, it’s enough to put them off their dinner.

Studies in California showed that mountain lions (also called pumas) would change how they ate in areas where humans were more present, like subdivisions or developments. Recent kills of deer or other small creatures are abandoned more frequently in more populated areas, and biologists were curious; what was it about people that was scaring these big cats away from their hard-earned dinner?

Justine Smith studies pumas in California, and became interested in figuring out how the presence of a super-predator like humans—we’re really good at killing things, even top predators such as pumas—affects how animals behave in a landscape.

In this case, they wanted to see if something as benign as a human voice would be enough to make the pumas freak out.

“We decided to play the sounds of humans talking directly to pumas, and measured what they did,” Smith says. Turns out, as soon as they hear human voices, these cats turn tail and run.

The results of their work was published Wednesday in Proceedings of the Royal Society B.

The first step in talking to a puma was finding out where the pumas would be. By tracking the movement of mountain lions fitted with GPS collars, Smith and her colleagues were able to pinpoint where a mountain lion had made a recent kill.

Once they’ve killed their prey, pumas can chow down on the same meal for several days, abandoning the meat during the day, and returning at night for their evening repast over the next 4-5 days.

Smith took advantage of the daytime window to set up a camera and speaker near the kill site. When the mountain lion returned, a motion sensor triggered the speakers to start playing an hour-long stretch of sound divided into two 30-minute sections. Which 30-minute segment started playing first was randomized by the computer program, but there were only two choices: the dulcet sounds of frogs croaking, or talk radio.

“We used voices from talk radio partially because they are generally high quality, and partially for our own amusement,” Smith laughs.

They chose seven species of frogs croaking and seven different radio hosts to make sure that it wasn’t just that pumas are particularly opposed to a particular kind of frog or a particular radio host. The team used recordings of both conservative and liberal pundits, and both male and female voices. Smith says they didn’t notice a difference in mountain lion reaction between male or female voices, and they took other precautions as well to make sure the segments sounded as normal as possible.

“We did make sure we chose segments of speech where the hosts were not yelling or agitated, we really wanted to find the most benign form of disturbance; Could someone walking down a trail initiate a fear response that we could measure?” Smith says.

In the videos, the fear response is striking. While the pumas have no problem with the frogs, at the first sound of a human talking they freeze and promptly run away, leaving their food where it is.

“It’s a two-pronged attack on their energetics. If an animal respond fearfully it might be running off and moving far away which expends their energy, but it also reduces the amount of energy that they gain from the kill itself,” Smith says.

In some cases, the mountain lions were so spooked that they completely abandoned the kill after hearing human voices.

“Luckily we only did this once per puma, so we weren’t chasing the animal off their kill multiple times,” Smith says.

That’s important because many of the areas where these pumas make their homes contain small towns or low-density residential areas where it would be hard for an animal like a puma to avoid humans (or their voices).

“Even the areas that are protected open space have very high recreation rates,” Smith says.

Why pumas are so scared of human voices remains to be seen. Smith speculates that it could have something to do with their history. Pumas were hunted for bounties for years, and have only been protected in California since 1990. They might have developed a sense over time that humans are synonymous with a threat, which isn’t out of line. Humans still kill pumas that eat livestock, and they are frequently hit by cars.

“I think that’s the silver lining of this study,” Smith says. “Even though there are these ecological consequences of pumas giving up food and having to kill more to compensate, at least they know to be fearful which probably does increase their survival at the individual level.”

A top predator behaving like prey in response to humans leaves a lot of open questions about how we might change the behavior of other animals in the ecosystem—from small carnivores to the deer and other animals that the pumas feed on. Smith and colleagues plan to continue their research, exploring how this fear at the top might ripple through the entire food web.

The research might also help explain why it’s one thousand times more likely that you’ll get hit by lightning than attacked by a mountain lion. You should still take precautions if you live near their habitats. But if you do, remember; they’re more scared of you.