They learn to outsmart hunters as they get older. 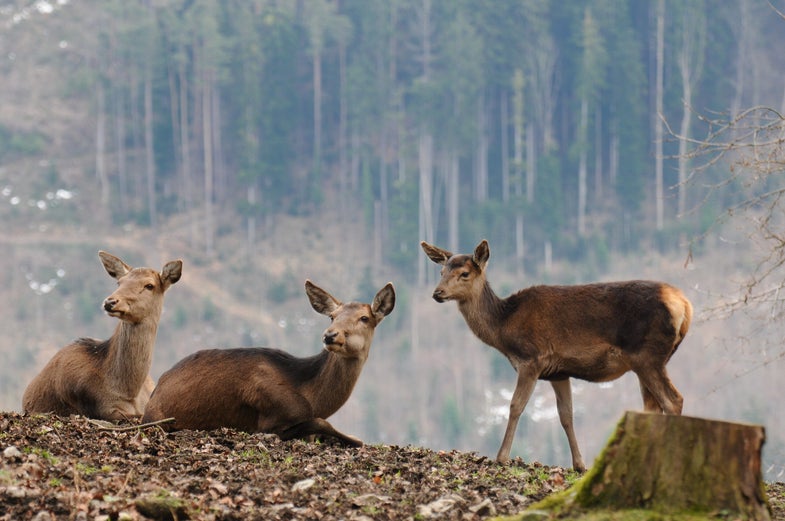 Fortune doesn’t always favor the bold. Whereas male elk tend to live fast and die by age 5, some female elk have been known to live to the ripe old age of 20.

Ecologist Henrik Thurfjell from the University of Alberta wanted to find out how lady elk were living so long. Was it because they were cautious by nature, or were they learning to avoid hunters over time? After putting GPS collars on 49 female elk (“cows”) in western Canada and tracking them for six years, Thurfjell and his colleagues learned that the answer is: both.

The cows who lived the longest started out warier by nature. But they also became more cautious the older they got. They grew stealthier, moving shorter distances to decrease their chances of being heard or encountering a hunter. They also made use of dense forest as cover when nearing a road, and got better at avoiding roads in general.

Cows may even adopt different strategies for different types of weapons. They seem to spend more time in rugged terrain during bow season, which could make it difficult for a bow hunter to get within shooting range.

The older she gets, the less likely a female elk is to get caught by a hunter. Thurfjell told New Scientist that some get so good at avoiding humans that they’re almost bulletproof.

The New York Times notes that there are a few reasons why male elk don’t live as long as females. For one, they’re more heavily hunted, and it’s easier to trick them with calls that sound like rival males encroaching on their territory. In addition, female elk live in groups, which gives a cow more chances to see her cohorts get picked off by hunters—and to learn from those situations.

The study authors hope that this new insight could help to ease tensions between farmers and the elk that eat their crops. Thurfjell suggests that farmers could just kill one or two members of a group, and the rest would learn to keep away from that field—which ultimately helps humans and elk alike.