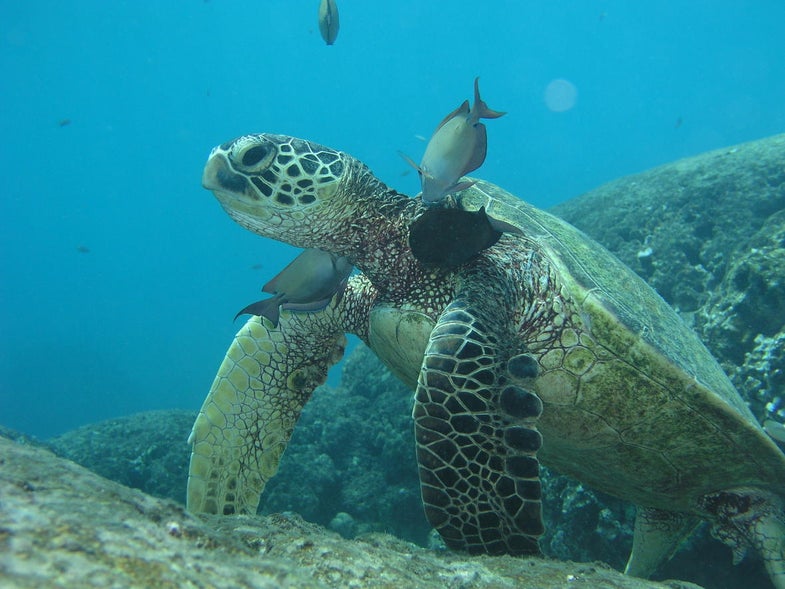 If you look at your skin, most of what you will see is actually dead cells. This thin outermost sheet protects the living cells underneath as they develop.

“That’s why people exfoliate—because your skin cells are designed to mature and slough off,” says Thierry Work, a wildlife disease specialist with the U.S. Geological Survey. In June, he and his colleagues reported that they successfully mimicked this process with sea turtle skin. No, they didn’t give sea turtles a facial, but they did grow layers of turtle skin in the lab.

Work is studying the virus responsible for a deadly disease called fibropapillomatosis, which causes tumors to grow all over sea turtles’ skin and inside their bodies. “In order to grow this virus we have to basically replicate skin in the lab, because this virus will only grow when skin cells are maturing,” he says. Cultivating the elusive virus may help researchers save sea turtles and perhaps shed light on how herpes viruses replicate in people.

Work’s efforts represent the first time that scientists have engineered reptile skin, but we’ve been building our own lab-grown versions of mammalian skin for decades. Lab-made skin can help us find treatments for diseases, heal wounds, spare animals from cosmetics testing, and design “leather” that emulates the look and feel of real animal hides. Here’s how we’re imitating skin to benefit humans and other creatures.

Fibropapillomatosis most often strikes endangered green turtles, although it sometimes shows up in other species of sea turtles. The illness can debilitate turtles by growing tumors that prevent the animals from seeing properly or eating, and by suppressing the immune system.

To combat this disease, scientists must examine how the virus (Chelonid herpesvirus 5, or ChHV5 for short) multiplies in living cells. So Work and his team collected skin samples from green turtles with fibropapillomatosis that had just died or had to be euthanized. They then made a gel from collagen—the same protein that gives skin its firmness—and seeded it with cells taken from deep within the donated skin. It’s this layer that we see when we examine a leather handbag or pair of shoes, Work says. Finally, his team grew surface skin cells on top of this scaffold.

The fruits of their labors are little plugs of skin only about 5 to 6 millimeters wide. But under the microscope, they look just like actual turtle skin, Work says.

Chelonid herpesvirus 5 and some other viruses (such as the one that causes warts in people) can’t be grown in a lab without an environment that mimics the shape of skin and is populated by live, maturing cells.

Other viruses are less demanding, including herpes simplex (cause of cold sores and genital herpes in humans). Normally, herpes simplex and other viruses are grown on a flat “lawn” of skin cells in a petri dish. But this setting doesn’t really recreate the shape and structure of real skin. So there may be insights we’re missing by cultivating viruses in a dish. “We really haven’t seen what the virus does in the actual three-dimensional structure of reconstructed skin,” Work says.

When he and his colleagues grew ChHV5 in their turtle “skin,” the pathogen did not behave as expected. The viruses formed odd looking, sun-shaped structures to serve as “factories” in the cells where the virus settled in and made copies of itself. “The way all these components were being put together…was quite different than what people saw with conventional herpes viruses,” Work says.

It could be that herpes simplex, and other herpes viruses that infect people, also form similar structures to assemble fresh recruits. “The replication of the herpes virus is actually a lot more complicated than what people thought,” Work speculates. The more we know about how viruses actually interact with cells, the more effective drugs we can design.

Now that scientists can cultivate ChHV5 in the lab, the next step is to come up with a blood test for fibropapillomatosis. That would tip them off that the disease is on the loose in a particular area before turtles begin to die. “They’re in a world of hurt, and by the time they’re heavily tumored its really too late to do anything,” Work says.

It won’t be practical to vaccinate or treat all the turtles directly. But we may be able to discourage the disease’s transmission, the same way we use insecticides and bed nets to thwart mosquitoes from passing on malaria.

And now that reptile skin has been successfully grown in the lab, the technique could be put to work investigating other reptile and amphibian skin diseases. Engineered hide might help us learn more about snake fungal disease, which threatens snakes in the eastern and Midwestern United States, or the chytrid fungus that has infected frogs around the globe.

Turtle skin doesn’t have hair follicles or sweat glands, Work says. So it’s a bit easier to engineer than human skin. Nevertheless, the technique he used to emulate sea turtle pelts was adapted from ones commonly used to grow our own version of human skin.

Skin substitutes are an alternative to using grafts transplanted from elsewhere on a patient’s body to cover burns or other chronic wounds. “There’s going to be a limited number of times that patients will allow the grafts to be taken from their thighs. These products that are ready-made became very popular because of that,” says Vincent Falanga, an emeritus professor in the Boston University School of Medicine’s department of dermatology, whose studies on living bioengineered skin led to the U.S. Food and Drug Administration approving it to help non-healing wounds close more quickly.

Unlike skin grafts, bioengineered skin does not stick around, and eventually disintegrates. It does, however, protect the wound and stimulate the skin’s natural healing processes. Using bioengineered skin is a less painful process than undergoing skin grafts and may cause fewer complications, although it’s also more costly in general.

Bioengineered skin is often grown using cells taken from newborns’ foreskins. However, the vigorous young cells may stimulate the damaged area so much that it requires more energy than it can supply, Falanga says. Bioengineered skin that relies on less-active adult cells might actually be more effective in helping wounds to heal.

Skin substitutes don’t quite function like the real thing. Last year, though, researchers in Japan reported that they’d grown realistic mouse skin from stem cells and successfully transplanted it onto other rodents. Previously when scientists grew skin from stem cells, they only managed to make sheets of cells emulating the skin’s outermost layer. But the new skin recreated all three of the layers found in skin, as well as boasting hair follicles and sebaceous glands (which make a fatty secretion to lubricate the skin).

Falanga is skeptical that this kind of engineered skin will perform well in chronic wounds. “People in the bioengineering field, they want to reproduce what’s already in nature,” he says. “We want to have a product that looks exactly like skin.” Yet lingering wounds lack proper blood supply or have other problems that prevent them from healing. So they may be unable to maintain normally functioning skin, with its high energy demands.

However, the team in Japan hopes their lab-grown skin will eventually help people with burns, scars, or skin diseases like alopecia. “Up until now, artificial skin development has been hampered by the fact that the skin lacked…important organs, such as hair follicles and exocrine glands,” coauthor Takashi Tsuji, of the RIKEN Center for Developmental Biology, said in a press release. “With this new technique, we have successfully grown skin that replicates the function of normal tissue.”

The realistic skin also brings scientists closer to their dream of growing whole organs that can be transplanted into people, Tsuji said.

But medical treatments aren’t the only uses for skin substitutes. Tsuji and his team also have another goal in mind for their creation: Eventually, the realistic skin could be used for testing out cosmetics in lieu of animals.

There are already several companies devoted to just this purpose. Boston-based MatTek sells their lab-grown skin to other companies that make laundry detergent, makeup, anti-aging creams, and other chemicals.

Like Work’s sea turtle skin, these nubbins of skin are tiny—just a fraction of a millimeter thick. They are grown from skin cells left over after surgical procedures like tummy tucks and circumcisions. This “skin” is a better proxy for actual human hide than animals are, one of MatTek’s customers told Wired last year.

Lab-made skin will soon provide an alternative to leather, too. Brooklyn-based startup Modern Meadow genetically engineers animal cells to produce collagen, which they use to make leather that resembles actual animal pelts. The “biofabricated” leather takes two weeks to grow, as opposed to the years it takes to raise an animal, slaughter it, and tan its hide. And because the cell-spun leather lacks features like hair and fat, it’s more eco-friendly to treat than the real thing.

Could Work’s lab-grown reptile hide also be used instead of skin from actual snakes or alligators for bags and shoes? “You’d need to optimize this technique quite a bit before you got to that scale,” he says. “But I certainly think it’s possible.”

Also apparently on the table: using DNA from a deceased fashion icon to grow skin for leather jackets and bags. Designer Tina Gorjanc wants to create artificial skin using Alexander McQueen’s genetic material, harvested from hair he used in a 1992 collection. She’s filed a patent in the United Kingdom for the process, although for now her prototypes are made from pig leather treated to look like human skin.