How the Galapagos cormorant forgot how to fly

This bird is grounded, but still seaworthy. 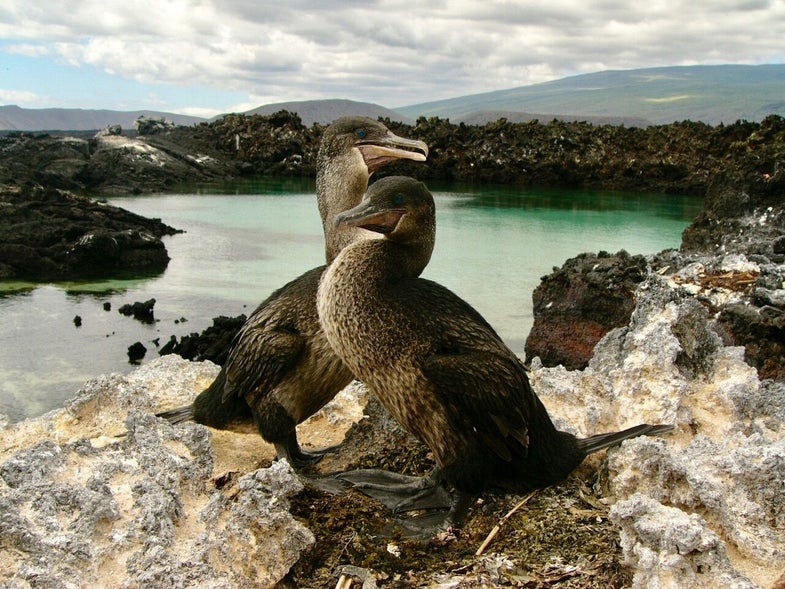 Cormorants, with their distinct silhouette and dark feathers, are master fishermen who dive deep into the sea in pursuit of prey. Of the 40 species of cormorant in the world, all are gifted swimmers, but only one—located in the remote Galapagos islands—has lost the ability to fly.

In a paper published on Thursday in Science, biologists and geneticists figured out how the bird got grounded.

Flightless birds have been a source of fascination for evolutionary scientists since the days of Darwin. Ostriches, emus, kiwis, and penguins have all had their lack of flight ability explored, from their feathers to muscles to bones. But with the Galapagos cormorant, geneticists had a unique opportunity to zero in on the genetic roots of flightlessness.

The Galapagos cormorant last shared a common ancestor with flighted cormorants two million years ago, which is an incredibly short time in evolutionary terms. For comparison, humans and chimpanzees last shared a common ancestor roughly seven million years ago if not even earlier. Ostriches and kiwis shared common ancestors with flighted relatives millions of years before that. The relatively short evolutionary distance between Galapagos cormorants and other (flighted) species makes these birds ideal candidates for looking at genetic changes that might underpin the physical differences that separate the species.

In the new paper, the researchers noted that when they compared the genome of the flightless cormorant to three flighted species, there was a distinct mutation found around genes that regulated the formation of cilia, or tiny structures that form on cells from green algae to humans. Cilia have different functions in different organisms, but in vertebrates like cormorants and people, one of their functions is regulating skeletal development.

“One way to think about flightless cormorants is to think of overgrown big chicks,” says lead study author Alejandro Burga. Many features of the Galapagos cormorant, including a short keel (an extension of the breastbone) and small wings, resemble the juvenile stage of cormorants. Mutations on genes related to cilia or skeletal growth could help change the birds’ skeletal structure in this way.

They tested whether or not these genes would significantly alter cilia by altering genes in the same way in mouse cells and C. elegans, a nematode frequently used in biological research. While cilia in these tiny worms serve a very different function than they do in vertebrates, the researchers found that the cilia in the nematodes and the mouse cells were significantly altered.

So why would this mutation have persisted in the Galapagos population? It could be that with an abundance of food and a lack of predators, they simply lost the need to fly. Being flightless may also have helped the birds redirect their energy resources towards size, or let them become better swimmers, like penguins, able to dive deep and access fishing areas off-limits to competitors.

“The Galapagos cormorant is the largest cormorant despite having the smallest wings,” Burga says. “Maybe it is beneficial.”

But, he adds, there is no reason that it couldn’t be some combination of those factors. They might have both lost the need to fly and gained advantages from not flying at the same time. Neither explanation is mutually exclusive.

Burga and his colleagues still have a lot of questions that they want to answer. “There is still a lot to know and understand,” Burga says. “Is it something that is unique or is it something that has evolved in different birds? Can we find the same genes that have been affected in other birds? Are the mutations responsible for morphological changes in other animals, including primates?”

The last question is especially interesting for humans. Humans can develop sometimes lethal skeletal ciliopathies or diseases related to cilia development that affect the bones. It’s not a one-to-one comparison, but understanding more about how these genes function in other animals could lead to a greater understanding of how they might manifest in our own species.