Birds’ ability to fly could determine the shape of their eggs

Not all eggs are created equal. 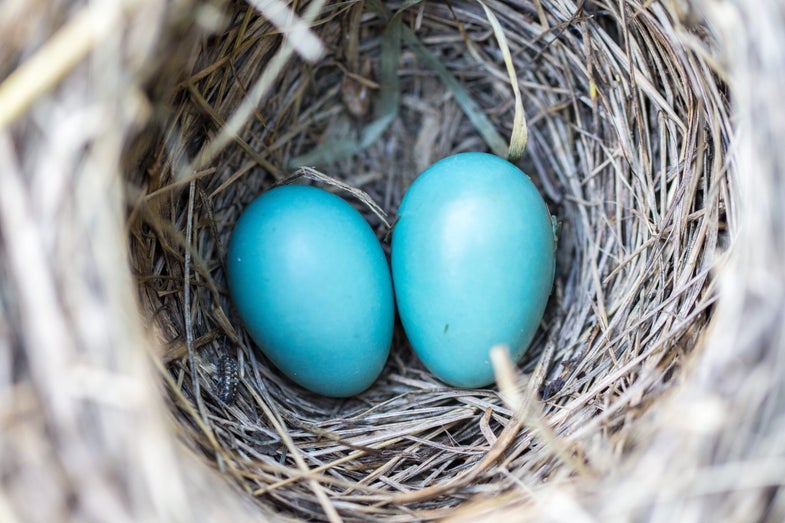 We all know what an egg looks like, right? Well, we might know less than we think—bird eggs can be spheres, teardrops, oblong, and anything in between. An interdisciplinary group of scientists may have made progress in cracking the mystery behind how these different shapes emerged.

A new study in Science shows that differences in flight ability might actually start as early as the egg: birds that take to the skies have more elliptical, asymmetrical eggs, while land-bound birds (like ostriches) have more spherical eggs.

“My colleagues and I were really struck by the diversity in egg shape,” says Mary Stoddard, first author of the paper and an assistant professor at Princeton. “Bird eggs all serve a similar function: to nourish and protect the growing chick. But despite their shared function, they evolved different shapes.”

Not all eggs are like the ones at the grocery store; the vast landscape of bird eggs actually spans a much wider range of shapes. The brown hawk-owl’s egg, for example, is practically a perfect sphere, while the sandpiper has a teardrop-shaped egg.

The researchers’ first step was to characterize this diversity with two measurements. First, ellipticity: start with a sphere, and as you stretch it out, it becomes more elliptical. Second, asymmetry: sometimes, one end of an egg is pointier than the other. Each of these measurements is a continuum—values can fall anywhere in the middle—and by combining them, you can describe nearly any egg. Asymmetrical and elliptical? Like a teardrop. Symmetrical and spherical? That’s a sphere, duh.

The researchers plotted 50,000 different egg shapes from 1,400 species along these two axes and were surprised to incredible variety—more than in other egg-laying vertebrates. They found that most eggs fell somewhere in the middle, like a chicken egg: a little more elliptical than a sphere, and somewhat asymmetrical. But how do these shapes arise?

Previous research has shown that shape is determined by the egg’s flexible membrane, a protective layer below the hard shell. This study goes one step further to propose how the membrane’s shape is determined in the first place. It suggests that properties of the membrane in different parts of the egg—thickness and elasticity, for example—determine how the shape of the membrane changes in response to the changes in pressure. The researchers created a computational model to show how tweaking membrane properties in certain parts of the egg can affect the overall shape.

To determine the biological significance of these unique shapes, Stoddard and her colleagues compared egg shape with other traits, such as body mass, nest size, and hand-wing index (an approximation of flying ability based on the size of different parts of the wing).

Some of their findings were expected; for example, longer eggs tend to hatch into larger birds. But their most surprising finding was that flight ability was the best predictor of egg shape; adept flyers laid more elliptical and asymmetrical eggs. Stoddard and her colleagues think that, in order to be aerodynamic, flying birds must have streamlined bodies, which limits the possible width of the egg. The birds still need to produce eggs with enough yolk and egg white inside, though. More elliptical and asymmetrical eggs would maximize the volume contained within an egg of a given radius, making them advantageous for birds of flight.

The team carrying out the study spanned many different fields—biology, computer science, physics, math—and Stoddard credits this interdisciplinary team for the breadth of the study.

“Having diverse perspectives allowed us to understand the diversity of egg shapes in a different way, looking at both mechanics and function,” Stoddard says. “We were able to ask both the ‘how’ and ‘why’ questions.”

Stoddard doesn’t think this study negates previous work on the question of egg shape. The conventional wisdom has been that egg shape is determined by nest location and the number of eggs in the nest, and that might still be true on a smaller scale, she says. “What we find at the global level may not always be identical to what we see in smaller groups.”

In their future work, the researchers hope to take a closer look at egg membranes and the body plans of different birds to see if they support the model in this study. They also want to look back in time to see how dinosaur egg shapes differed from birds, Stoddard says, because preliminary results suggest that asymmetrical eggs evolved around the time that birds began to diverge from the rest of the bunch.