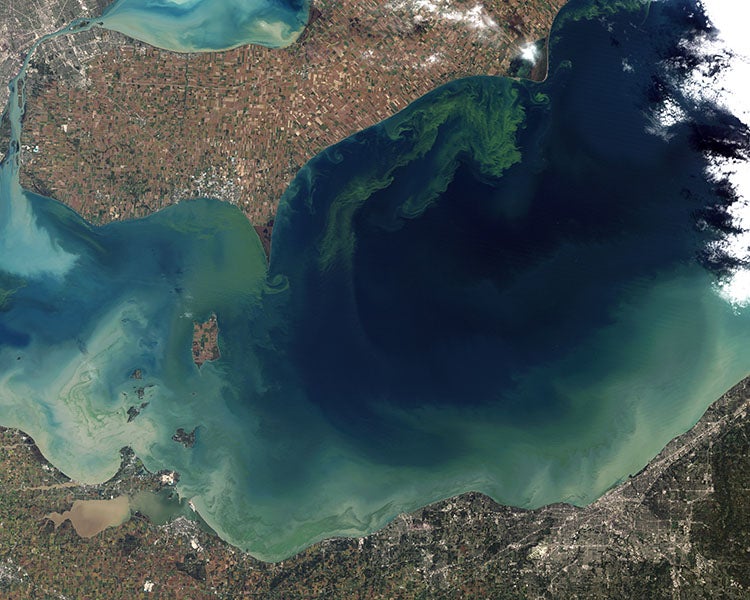 Michalak, who heads up a lab in Department of Global Ecology at the Carnegie Institution for Science on the campus of Stanford University, published a study today in Science suggesting that because climate change will lead to more rain in some places, water quality around the world will decline.

To explain how rain can kill water quality, let’s start with a refresher on the Gulf of Mexico: an aquatic dead zone has developed there every summer for the past 32 years. In 2016, the dead zone spanned 6,000 square miles (roughly the size of the state of Connecticut). This year the National Oceanic Atmospheric Administration (NOAA) predicts it will reach the size of New Jersey, or around 8,700 square miles. The source of the Gulf’s woes is the Midwestern Corn Belt, where nitrogen from fertilizers runs off of the farms into streams and rivulets, causing what’s known as eutrophication. Eutrophication, in short, happens when there are too many nutrients in the water.

From the corn belt, the nutrients make their way to the Mississippi River and down to the Gulf. The combination of nitrogen and warm summer temperatures feeds the region’s algae, who for one brief moment become rock stars. They bloom brilliantly—then die all at once. When they die, bacteria feast upon their remains, sucking oxygen from the water in the process. Fish might not breathe air, but they do need oxygen to survive. So the speediest species leave in search of better aerated waters. Slower critters, like the Gulf Coast’s famed oyster, simply die. Their decaying remains feed the dead zone and help it grow, perpetuating the region’s loss of life. The process only slows when fall’s cooler temperatures help close that terrible feedback loop.

Along with lead study author Eve Sinha, a research student in Michalak’s lab, Michalak found is that increased rains caused by climate change will make this whole process worse. Why? Because more rain means more nutrients—the feedstock of this whole process—get washed into waterways. In the United States, this pattern will be especially strong in the corn belt and in the Northeast. Globally, this is likely to worsen eutrophication in India, China, and Southeast Asia.

“They are very dependent on surface water as well as coastal water, and these are extremely densely populated regions,” says Sinha. “More human beings will be impacted by degraded water quality in those regions than in any other part of the world.”

In order to figure this out, Sinha, Michalak and their colleagues took a model that they’d developed in a previous study. It takes United States Geological Survey (USGS) measurements of nitrogen loading (where nitrogen tends to enter ecosystems over a defined period of time) and ties that data to precipitation. If it rains an inch, how much nitrogen ends up where? In the new study, they plugged in climate model data on future rainfall to see how things might change in the coming years.

Because they only wanted to see how changes in rainfall would affect the model, they kept other drivers fixed. They didn’t assume, for example, that farmers might start irrigating more (due to irregular precipitation), or that they might start using more fertilizer.

In the past, if you wanted to do something like this it would have taken a supercomputer (or a ton of computing time on your standard desktop). That’s because you would have had to take the climate model and feed it into another complex model, which would have done things like predict how much water would get soaked into the ground as opposed to running into streams. Those sorts of details are interesting, but running a model that way is sort of like baking bread using a recipe that lists the chemical components instead of things like flour and yeast. It’s doable—but it takes a lot more effort. The new model is nimbler, focusing on the relationship behind precipitation and nitrogen loading instead of getting bogged down in the variables that connect these points of data to each other, which made it easier to fold in future climate predictions.

They found that increased rainfall alone would account for a 20-percent increase in nitrogen loading for the whole country. Because eutrophication is such a problem, the United States Environmental Protection Agency has tried to reduce input by 20 percent. So by the end of the century, based on increased rainfall alone, nitrogen loading in waterways will increase by almost the same percentage as the EPA is currently trying to reduce it.

Domestically, a lot of that nitrogen loading would happen in the upper Mississippi, Atchafalaya River Basin, Northeast, and Great Lakes regions of the continental United States. This isn’t totally a surprise, while the Gulf of Mexico’s dead zone is perhaps the nation’s largest dead zone, it is not alone. The Chesapeake Bay also has a dead zone, as do Lake Erie and Lake Michigan.

Even if you don’t live in any of these regions, your dinner is still at risk—the Gulf’s dead zone helps drive up the cost of shrimp, for example. And the researchers are quick to point out that their study focuses on where nutrients will enter—which is useful for better land management—not necessarily where the nutrients will end up. Nutrient pollution can end up in ground water, where it makes the water unsafe to drink.

“It can be seen as a challenge to society, rather than as a bleak result,” says Michalak. “And in thinking about this challenge we have to have our eyes wide open and realize it’s not just about the local land management. It’s also about climate change.”

The solution will ultimately involve a mix of taking steps to reduce climate change, along with reducing the level of nutrient runoff. Because, says Sinha, “If you don’t have agriculture, you don’t have much eutrophication.”

This does not mean a return to our hunting and gathering days. But the adoption of new, better agricultural practices might not be a bad idea. But whatever we choose to do, we should do it fast. We may only have three years left to really act on climate change.