It could be a sign of more damage to come. 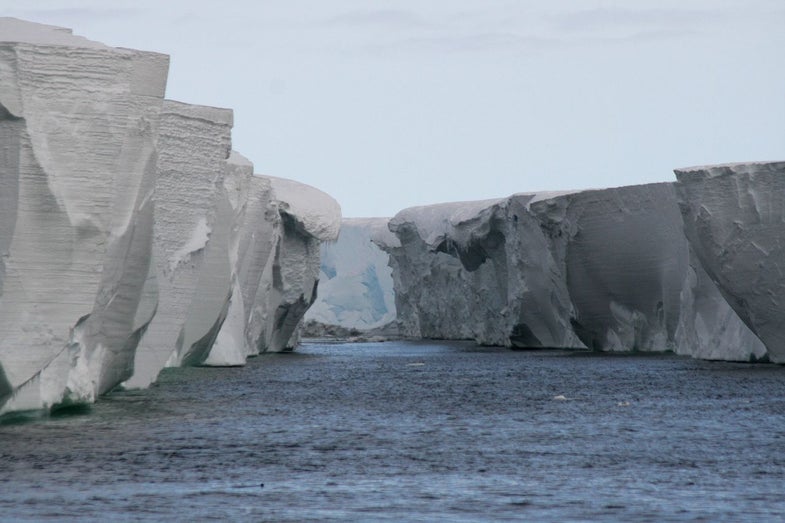 El Niño has given us a preview of West Antarctica‘s future, and things do not look good.

For two weeks in January of 2016, unusually warm weather caused a 300,000 square mile patch of the Ross Ice Shelf to partially melt. The roughly Texas-sized area, blanketed in a slushy mixture of ice and water, represents one of the first times scientists have been able to catch such widespread Antarctic melting in action. The findings were published this week in Nature Communications.

The meltwater caused no sea level rise, because eventually it re-froze. So this event poses no immediate danger to us. But it does give scientists a terrifying glimpse into Antarctica’s future.

A strong El Niño event caused the bizarrely warm conditions. During the El Niño climate pattern, the Pacific Ocean’s surface heats up around the equator, and currents carry the warmer than average temperatures to Canada, the U.S., and Antarctica. In this case, El Niño brought rainfall to West Antarctica, which is quite an extraordinary event.

“The story of melt all over the ice shelf rattled through the science community as it happened,” Robin Bell, an Antarctic researcher at Columbia University who was not involved in the study told The Washington Post. “Who had heard of rain in Antarctica—it is a desert!”

As our planet warms, El Niño events are expected to become more frequent over the next century. So melting events like this could become more common, too.

We already knew that warm ocean waters have been melting the Ross Ice Shelf—the world’s largest block of floating ice—from below. The new research confirms that balmy weather can melt it from above as well.

Being attacked from the bottom and the top could make Ross fracture and collapse more quickly. That’s not good, because ice shelves like Ross help hold Antarctic ice on land, which keeps glaciers out of the water. Once the shelves fracture, that ice can pour into the ocean a lot faster. David Bromwich, a climate researcher at Ohio State University, told Motherboard that if the Ross Ice Shelf collapses, sea levels would rise by 11 feet, which could flood nearly 30,000 square miles in the U.S. alone.