Pandas, which are basically giant poop machines, may inadvertently help save other species 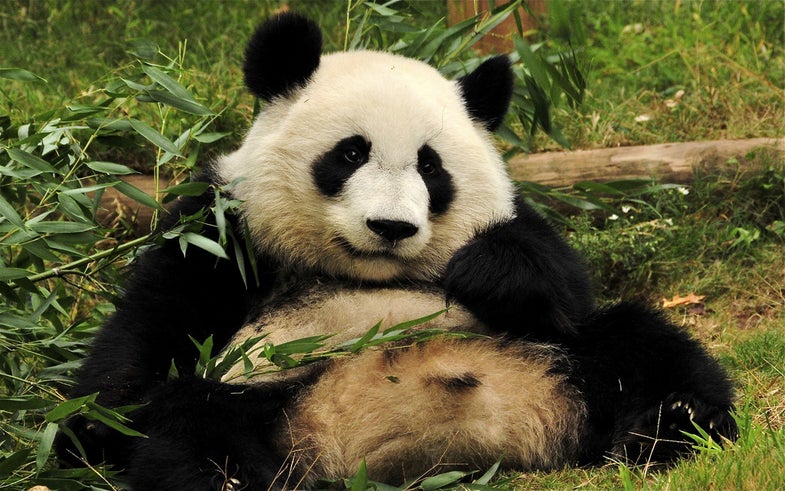 Pandas get a lot of attention—and given how hard it is to keep those black and white bundles of fluff from going extinct, it’s not surprising that they take up a huge glut of the world’s conservation funding. These are animals that literally evolved to be lazy: the only food they eat, bamboo, is incredibly hard for them to digest, so they have to consume about 30 pounds of it a day (around a fifth of that is actually digested) and expend so little energy that they basically live in a state of suspended animation. They also seem to suffer from pretty constant gastrointestinal disorders, and they’re notoriously difficult to breed in captivity. Still, we work to save them. In fact, thanks to aggressive conservation efforts from China, the animals moved from “endangered” to “vulnerable” status in 2016.

But when a species is so bad at keeping itself alive that some folks argue we should let it die out, even the animal lovers among us have to ask whether all that effort is really worth it. Why let one animal take up so many resources just because they’re cute as heck?

According to a study published this week in Ecosphere, panda haters should probably pick another issue to play devil’s advocate on: China’s efforts to conserve panda territory have actually protected a bunch of other species, too, including golden monkeys, takins, red pandas, forest musk deer, and Asiatic black bears.

“Pandas are basically a national treasure for China, and they’ve become kind of the poster child for all conservation efforts,” says study co-author Andrés Viña of Michigan State University. “So they receive a lot of the money, they get a lot of the attention. We were interested to see how that might extend to other species.”

When Chinese officials set out to convert farmlands back into forests and reduce deforestation, they were only thinking of the iconic panda. But perhaps unsurprisingly, the preservation and restoration of over 20,000 miles of forest helped out some other critters as well. Even outside the borders of specially sanctioned panda reserves, planting and anti-logging efforts allowed local flora to thrive, increasing biodiversity. In fact, now that the reserves themselves have mostly reached maximum growth and density, areas outside of panda habitats are actually improving faster than those within panda range. The forests aren’t all perfect—in some cases, a push for fast-growing, closely planted conifers to help improve soil has actually hurt the biodiversity of plants—but overall, field data and satellite imagery indicate that panda love has helped the bear’s neighbors, too.

By improving these forests and the surrounding areas, Viña and his co-author Jianguo Liu write, conservation focused solely on the panda was making some solid improvements overall. So maybe focusing on a single beloved species isn’t always a bad thing.

“It supports the idea that when you conserve an animal like the panda, you are acting like an umbrella, with all these other species under the umbrella,” Viña says. “These resources for the panda are also being useful for all the things that coexist with them.”

The kind of satellite data assessment used by Viña and Liu could help similar conservation efforts be even more broadly applicable: researchers can track down locations where the panda-centric plan could be tweaked slightly in order to make more animals feel at home. Further research is needed to determine whether other charismatic megafauna create a domino conservation effect as profound as the panda does, but Viña is hopeful that it might work in other cases.