Cockatoos make their own lil drumsticks to play music

It's just another way to woo a mate. 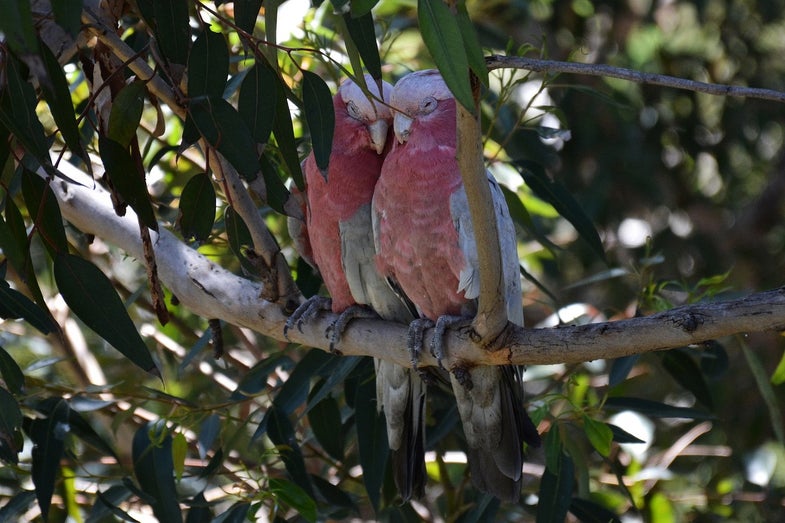 Apparently, humans aren’t the only creatures to get down to a sick beat. A recent study shows that some male cockatoos create their own tools to generate a percussive rhythm to attract the ladies.

Robert Heinsohn, the lead author of the study and a professor at the Australian National University, says drumming is part of a complex courtship display—one that also includes screeching, wing flapping, and ‘blushing’—that males use to convince females to lay eggs in their nest hollows.

“The drumming and rhythm seems to be an extra component designed to impress the females further,” says Heinsohn. “It seems it is important to be rhythmic but also to have an individual signature that is theirs alone.”

Each of the 18 males studied had their own distinct style. And the female birds did much more than just sit back and listen to a potential mate’s tunes; they also watched intently as the male snipped off a sturdy branch and trimmed it down to about 20 centimeters, demonstrating the strength of his beak as he created his drumsticks.

Plenty of animals use tools, but far fewer actually make those tools themselves. Heinsohn says palm cockatoos are highly unusual because they make specific tools—the drumstick being one of them—for the purposes of display and courtship. These tools not only amplify sound, but give it musical properties.

Other animals (like frogs and birds) use drumming and music to communicate, but even chimpanzees that drum tree stumps with their hands and feet don’t have rhythm like cockatoos do, Heinsohn says. These birds can drum at a steady rhythm, with a totally unique style, for up to half an hour—which takes quite a bit of practice.

“They seem to have their own internalized notion of a regular beat, and that has become an important part of the display from males to females,” he says. “In the paper, we liken their ability to the beat-setters in human bands, e.g. the drummer in a rock-and-roll band.”

Heinsohn and his colleagues noticed the evenly-spaced beat distribution while processing video footage of the birds taken over seven years with sound analysis software.

“Randomly spaced beats should have a particular distribution, but our analysis showed they were very significantly not random at all, and instead had hardly any variation in the interval between the beats,” he said.

How does this relate to humans and our appreciation for a good beat?

“Among humans, a regular beat is associated with percussion and group-based activity, especially dancing. But in palm cockatoos, drumming with a regular beat is done solo,” says Heinsohn. “This may be important because, whereas the origins of human rhythm are difficult to disentangle, palm cockatoos show us that regular percussive rhythm can evolve as part of a solo performance by males to females, i.e. in the context of mating, and therefore via sexual selection. Although they are not closely related to us, this still points to the distinct possibility that the preference for a regular beat in human societies had other origins before being applied so joyfully to group-based music and dance.”

Further studies will try to figure out just how much in common these beats have to our own—and how crucial a sense of rhythm is to cockatoo courtship.