Is there life on Mars? TBD. But scientists found ancient organic matter in the Red Planet’s rocks. 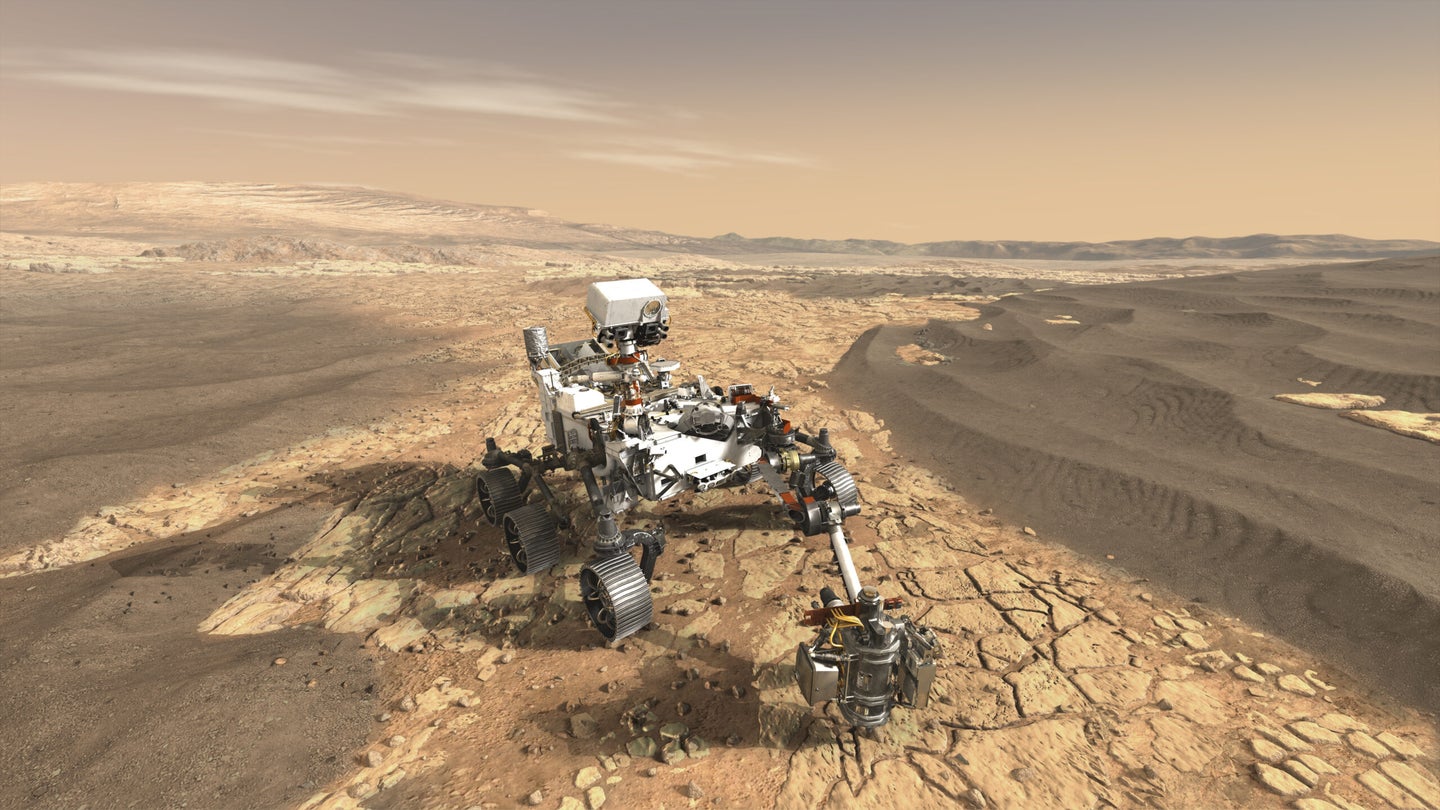 Scientists have been looking for organic material on Mars for decades, ever since actively testing the soil of the red planet during the Viking missions. In the years since, rovers, telescopes, and landers all sniffed out trails to follow—spikes in levels of atmospheric methane, indications of organics in ancient rocks—doggedly pursuing the question of whether the organic molecules similar to the ones that dominate Earth might also exist on our neighboring planet.

Two studies published today in the journal Science present exciting new findings; the detection of organic material in 3.5-billion-year-old rocks, and seasonal changes in methane happening in the Martian atmosphere.

First up: no, neither finding means that we’ve found life on Mars, recent or ancient. That’s a bold claim that would require way more data and corroboration to confirm. But the findings do give researchers looking into the question of whether there was once life on Mars hope that one day, they might be able to figure it out.

Both studies made use of the Sample Analysis at Mars instrument suite (but you can call it SAM). Chris Webster—a scientist at NASA’s Jet Propulsion Laboratory and lead author of the methane paper—describes it as “undoubtedly the most sophisticated chemistry lab ever sent outside planet Earth.” It’s capable of processing samples of both gas and rock, allowing researchers to piece together more about the past and present existence of Mars. Here’s what they’ve found.

“Organic just means carbon-based,” says Kirsten Siebach, a planetary geologist with Rice University who was not affiliated with either study. “The carbon on its own doesn’t tell us what its source is—it can be inorganic sources delivered by meteorites, it can be from volcanoes on Mars. However, it is a key ingredient for life to form, and for life to grow.”

The researchers used the SAM instrument to heat up drilled bits of rock collected from an 3.5-billion-year-old lakebed.

“We take this powder and we put it in an oven and we heat it up,” says Dawn Sumner, an author of the paper, comparing it to walking into a kitchen while someone is baking. “Say someone else put cookies in the oven. I can recognize how chocolate chip cookies smell, and it’s different from chicken or tamales. Similarly, you can smell the organic compounds that come from the oven and know more about what’s in the oven.”

Of course, components of Martian rocks are a bit harder to identify than chocolate chip cookies. The smells coming off these compounds are much harder to pinpoint, especially because they don’t register as a single, easily-identified compound.

“Imagine you have a giant molecule with all these bits and pieces glued together with chemical bonds. As you heat that sample up, the large molecule has bits and pieces of it cleaved off and the gases get swept down the pipeline to the instrument,” explains Jennifer Eigenbrode, a scientist at NASA’s Jet Propulsion Laboratory and lead author of the organic matter paper. “That’s what the instrument sees—bits and pieces of something bigger in the sample.”

Eigenbrode and others still aren’t totally sure what that larger organic molecule or molecules might be. They’re also trying to figure out how it managed to stay so well-preserved over the course of over 3 billion years.

Organic molecules tend to not survive for very long periods of time, often breaking down when they encounter water, radiation, or extreme heat and pressure. But while Mars does get bombarded with a lot of radiation, it isn’t sopping wet like the Earth, and unlike our own active planet, its rocks aren’t constantly churned and recycled by plate tectonics—giving this organic matter, whatever it is, a better chance at surviving.

Eigenbrode and her team took pains to make sure that what they were seeing really was organic material.

“I had my first inkling we were really onto something about a year ago, and then it was ‘if the data is telling us what we think it is we better make sure’,” Eigenbrode says. She repeated the tests over and over, making sure that her results were reproducible.

“I did it three times,” she laughs. “Because its is a very big finding and there’s a lot of data processing involved, because we looked at a lot of different samples. The moment I finally realized it was there was a moment of awe. We’ve been looking for this organic matter since 1976.”

Again, that doesn’t mean that these are the fossilized remains of 3.5 billion-year-old microbes. It could be something that ancient microbes ate, or there might have been no microbes at all. It’s possible these molecules formed purely from atmospheric or geologic processes, like volcanism, or a meteorite bombardment.

But the fact that the Curiosity team has definitively ID’d organic matter is still important, even if this isn’t evidence of life.

“If there was life, it’s typically very hard to find, but we now know that conditions were right for it to be preserved. We can look ahead with renewed vigor for that specific evidence,” Siebach says.

As Eigenbrode and her team concerned themselves with the rocks beneath Curiosity’s treads, another team was busy working on a vexing issue more to do with the air surrounding the SUV-sized rover, and more specifically, one gas within it.

”Methane represents the simplest organic molecules, and on Earth it is primarily considered a biogenic gas that comes from life on the Earth’s surface,” says Melissa Trainer, a research scientist at NASA Goddard Space Flight Center and an author of the paper. “Variable methane has been detected on Mars, but it’s eluded our understanding for over a decade. Over multiple missions the appearance and disappearance and behavior [of methane] has been something that we haven’t been able to understand.”

Early observations of methane on Mars had been from ground telescopes in Hawaii that measured those plumes. Then an orbiter called Mars Express took measurements over long periods of time, slowly building up an estimate of the abundance of methane on the planet. But it wasn’t until Curiosity descended by skycrane that researchers like Webster and colleagues were able to get the first in situ measurement of methane on Mars.

Curiosity is located in Gale Crater, a spot near Mars’ equator. But even there, the rover has a good vantage point to monitor the changes in the seasons on the planet. “We’re a bit like Hawaii in terms of our experience of the seasons,” Webster says. “We don’t have strong seasonal effects locally, but even locally the temperature changes are quite significant, they’re maybe 30 degrees [Celsius] from summer to winter. So there’s a significant surface temperature and air temperature change.”

In addition, Mars’ atmosphere mixes easily, with changes in one part of the planet affecting other areas. In addition to monitoring methane, the SAM instrument also monitored the presence of other gases that were better understood, including nitrogen, argon, and carbon dioxide. Nitrogen and argon also tend to vary seasonally on Mars, getting pushed around when as each pole experiences winter. At that point, carbon dioxide in the atmosphere freezes, falling onto the polar ice caps. “Up to a third of the mass in the atmosphere just freezes out. If that happened on Earth, we would really notice,” Trainer says. “When that happens the rest of the gases in the atmosphere get pushed around with the CO2.”

The argon and nitrogen increased in concentration as the CO2 froze and sublimated, but the methane was doing something very different. Though it was only present in small amounts in the atmosphere, the degree to which it increased and decreased didn’t match the observed changes associated with carbon dioxide.

The amount of methane detected by the instruments over the course of five Earth years is too large to be comprised only of methane delivered by meteorites, one potential source of the gas on the planet. Researchers also ruled out the possibility that the methane readings might be from the activity of the rover itself. And the seasonal change in the amount of methane in the atmosphere, while small compared to Earth’s standards, was significant enough to surprise the researchers when they saw it.

The team thinks it’s possible that instead, the methane might be coming from a subsurface reservoir somewhere on the planet, leaking out through cracks and vents. They’re not sure where this reservoir (or reservoirs) might be, and what form they might take. Here on Earth, large stores of methane are trapped in clathrates—cages of ice that lock gases like methane inside. It’s possible that similar deposits exist on Mars. But no one has ever observed clathrates on Mars, leaving them stuck in the realm of possibility.

While both studies are news to the general public, the researchers started getting their data in years ago. Eigenbrode describes the waiting process as “anticipation with a leash on it,” and Webster had a similar experience.

“Our surprise had to be stretched over five years. I would watch the points go up in the summer, and then we literally had to wait two Earth years before we got back to that Mars summer to see if the point went back up again—which they did. It’s required a lot of patience,” Webster says.

Both groups plan on continuing their analyses using Curiosity, but they’re also looking forward to other results.

“It’s really exciting that on Mars, with one car driving across the surface with these capabilities, that we were able to find that kind of preserved organic matter,” Siebach says “That really says that we have a much higher chance of being able to find evidence of ancient life if it existed.”

Curiosity went through something of a dry spell when it came to analyzing rock samples after a mechanical issue stymied the ability of the rover to drill. Earlier this year, NASA managed to get the drill back online, leaving researchers like Siebach looking forward to collecting and analyzing additional samples from other spots within Gale crater, estimated to be a million years younger than the rocks studied in this paper.

The next rover mission, Mars 2020, will also take rock samples. But instead of analyzing all the samples on site, it will also collect specimens with the intention of sending them back to scientists on Earth. The robot will pack some samples in a specialized capsule that will keep them safe during their eventual journey to Earth’s more advanced labs. “If we could bring back anything like what we found in the sample, on Earth we’d be able to analyze it in greater detail, without heating it up as much, and hopefully find out any evidence we could about what those organic molecules were like,” Siebach says.

Webster is interested in seeing what happens if the rover encounters a large plume of methane, which could contain enough material for the team to examine the carbon isotope ratio in the gas. That could tell them whether or not it’s likely to have a biological origin.

He’s also looking forward to seeing results from the European Space Agency’s Trace Gas Orbiter, currently in orbit around Mars. “They will be able to map the methane globally, which will be a huge step ahead,” Webster says. “In particular, if they see plume or patches of methane that tend to be associated with certain areas of Mars—a certain topography, cliff faces or canyons or certain mineral surfaces—that would be another very important next step. Looking for local sources that are also repeatable would help direct future missions, because we would go to that place and measure the heck out of it.”