FYI: Now We’ve Looked Below The Surface, Why Isn’t Mars Red On The Inside?

Anyone looking for evidence of life there had better hope it's not red all the way down. 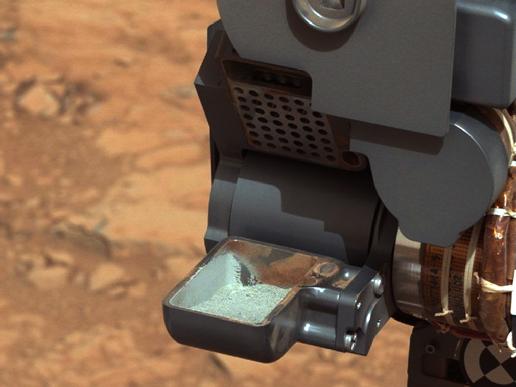 Mars is so associated with red–its very name is after the bloody god of war–that it’s weird to think about it in any other color. Rocks, dust, and even the atmosphere appear in hues of cinnamon, rust and orange in images from all the machines that have ever visited the Red Planet. But it turns out there is not much verisimilitude in this vermillion vision. Not beyond the surface, anyway. Underneath, Mars is a bluish shade of gray, as the Mars rover Curiosity’s first drilled sample shows.

It looks red because the dust and rocks on the surface are oxidized, the same process that forms rust on Earth. Over eons, oxygen in water and charged oxygen molecules in the atmosphere combined with iron atoms to form rust. The first tablespoon of dust from a ground-up Mars rock is intriguingly pale, however, and scientists working with Curiosity are excited about it.

“The tailings from our drill operation aren’t the typical rusty red we associate with just about everything on Mars,” said Joel Hurowitz, Curiosity sampling system scientist at the Jet Propulsion Laboratory. “You can probably bet that when things turn orange, it’s because there’s a rusting process of some kind going on that oxidizes the iron in the rock. The fact that these rocks aren’t that color means they didn’t go through that process that turns things to rust on Mars.” 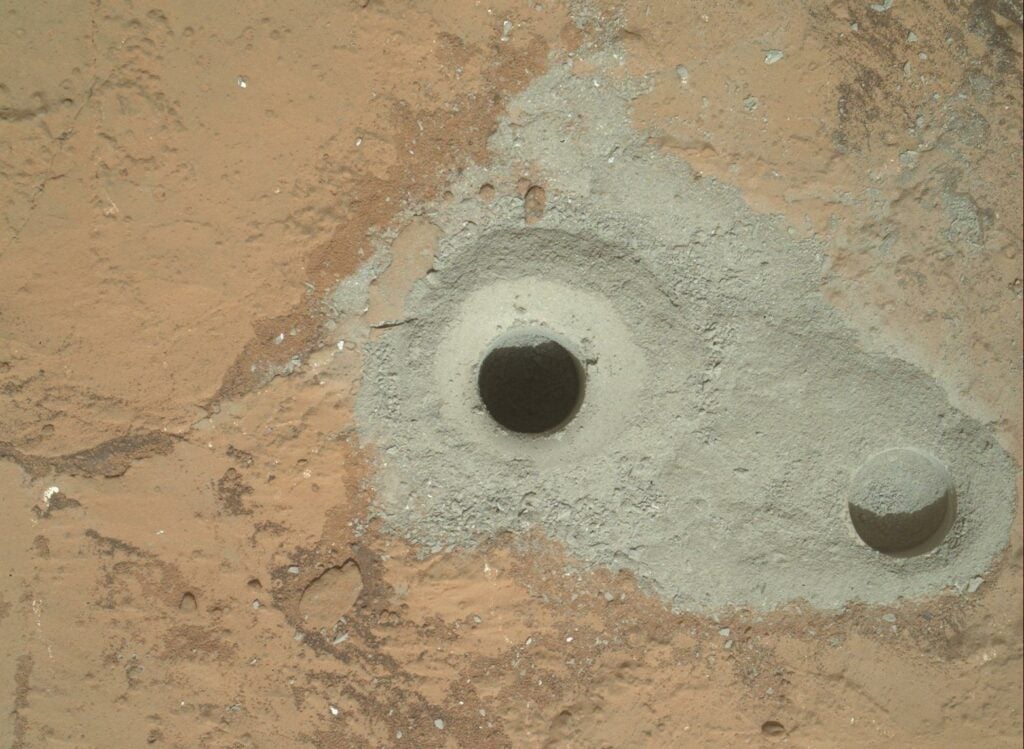 At the center of this image from NASA’s Curiosity rover is the hole in a rock called “John Klein” where the rover conducted its first sample drilling on Mars. The drilling took place Feb. 8, or Sol 182, Curiosity’s 182nd Martian day of operations.

Scientists don’t yet know what the rock contains–answers to that question will come in a few days, when the rover sifts the rock dust and transfers it to two instruments in its belly. The CheMin (for Chemistry and Mineralogy) and SAM (Sample Analysis at Mars) instruments will determine the rock’s chemical composition, and help determine how it formed.

The rock in question, dubbed “John Klein” after a mission scientist who died in 2011, is an exposed slab of bedrock that scientists believe is a time capsule into Mars’ past. “Going beyond that surface of the rock gets us behind, or under, all the environmental exposure that the rest of the top layers of Mars have been seeing,” said Louise Jandura, sample system chief engineer at JPL.

The rock looks like soapstone or mudstone, which is just the geologic name derived from the size of particles scientists can see. Even Curiosity’s 17 high-resolution cameras can’t resolve rock grains, suggesting they are very fine, scientists said. On Earth, rocks like John Klein could have formed in a variety of environments, but most of them involve water, Hurowitz said.

“It could be particulates settled out of suspension from a water body. That might be the quiescent part of a stream, a standing body of water; it could just as well be ash falling out of the air, or something like a glacial rust deposit where you have rock flour being deposited,” he said. “The contextual evidence we have from the other rocks we’ve looked at in the area leads us to hypothesize the most likely setting for this is subaqueous–one where water was involved.”

Verifying that John Klein formed in water would be a boon for the mission, which is trying to characterize whether Curiosity’s home in Gale Crater could ever have been hospitable for life. The lack of rust is also a potential good sign, said John Grotzinger, Curiosity’s principal investigator.

“All things being equal, it’s better to have gray color rather than red color, just because oxidation … we know destroys organic compounds,” Grotzinger said.

The rock is also criss-crossed with veins, nodules and other interesting formations. Its setting on the floor of Gale Crater looks like a flagstone patio, with little dust rivulets separating flat shards of bedrock. Scientists aren’t sure how it broke up to form that pattern–it could have been the result of hydraulic fracturing, or maybe a drying-out process that caused the rocks to shrivel up like caked mud in a dry desert. But what they do know is that inside, John Klein is not red at all.

“It’s pretty exciting to us that you sort of brush beneath this surface veneer and the rocks are a completely different color,” Hurowitz said. 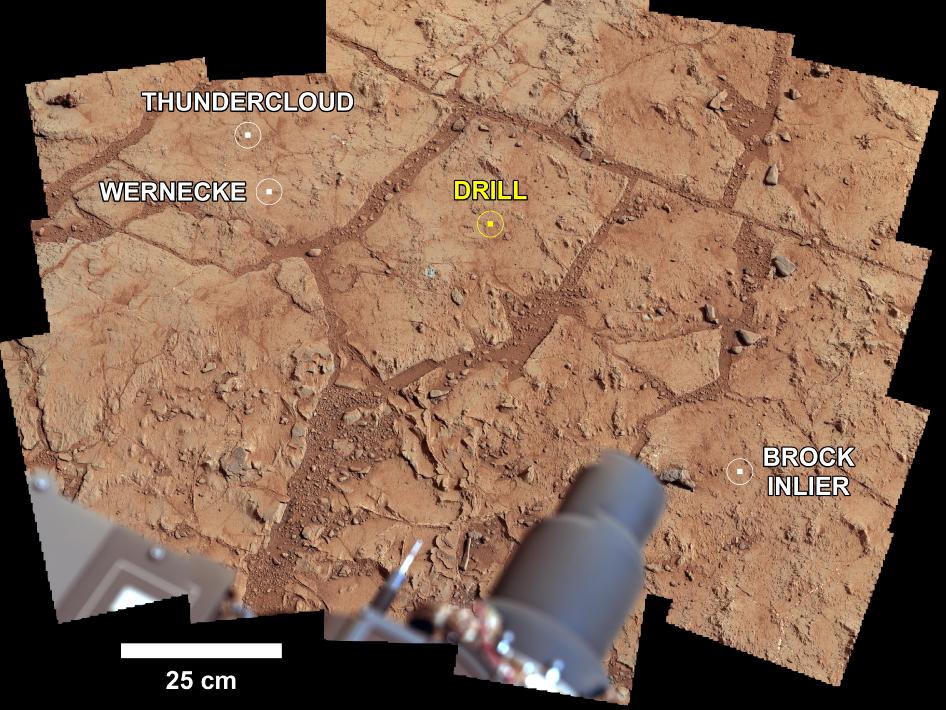