Curiosity has found some intriguing stuff in the Martian dirt, but it's not clear whether trace organic material is from Earth. 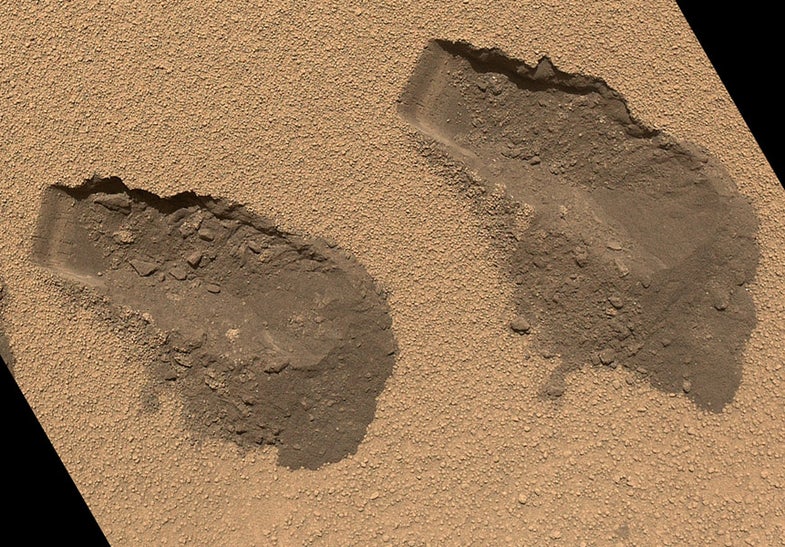 NASA’s Mars rover Curiosity can’t yet confirm any organic compounds on the Red Planet, NASA scientists said today–but the rover is seeing some intriguing chemicals, which will lead to further careful analysis about whether its home in Gale Crater could have played host to life.

“SAM has no definitive detection to report of organic compounds,” said Paul Mahaffy, the principal investigator for the SAM instrument, which stands for Sample Analysis at Mars. The instrument did see some carbon-containing material–it’s just not clear whether the carbon in it comes from Mars, or whether Curiosity toted it from Earth. What’s more, at least some of the detected material was most likely created in chemical reactions inside Curiosity’s belly, as the SAM instrument’s oven baked sand samples.

The results mark the first soil sample analysis from the SAM lab suite, the most complex chemistry lab ever sent to another world. “We really consider this a terrific milestone,” Mahaffy said at a news conference Monday.

The presence of perchlorate may be the biggest news from the press conference, which kicked off the day at the American Geophysical Union’s fall meeting in San Francisco. The Mars Phoenix lander also saw evidence of this chlorine-oxygen compound, which could conceivably be used as an energy source by Martian microbes. The analysis of these chemicals–which involves baking samples inside SAM’s oven and measuring the vapors that come out–in and of itself created new chemicals which the sensitive instruments picked up. Among those newly formed chemicals were some chlorinated methane compounds.The chlorine is from Mars, Mahaffy said. The carbon’s origin is still unclear. Scientists will try to figure it out by measuring isotope ratios and making other measurements.

Other results from Curiosity’s first few months on Mars include some analysis of the soil and rocks, which are apparently very similar in both chemical composition and appearance to rocks in other spots on the planet. The Pathfinder, Spirit and Opportunity rovers saw very similar soil in different locations. At Curiosity’s present location, a site in Gale Crater called Rocknest, the soil is about half volcanic material and half crystalline materials, like glass. Interestingly, the water bound up in this soil is much, much heavier than water in Earth’s oceans, Mahaffy said.

Scientists, Curiosity followers and Marsphiles around the world eagerly awaited Monday’s announcement because of earlier rumors and speculation that the rover team was about to share something “Earth-shaking.” Curiosity is not designed to find life, just evidence of environments that could have played host to it at some point. Finding organic molecules would be an interesting step toward an eventual life-finding experiment. Organic compounds in this case means carbon-containing complex molecules, not something alive (or formerly alive). These compounds rain down on all terrestrial planets and are found throughout space, and they do not necessarily indicate the presence of life.

For one small drift of sand, the SAM and CheMin (for Chemistry and Mineralogy) instruments did a whole lot of work, said Curiosity’s project scientist, John Grotzinger of the California Institute of Technology in Pasadena. “We used almost every part of our science payload examining this drift,” he said in a statement.

A couple weeks ago, Grotzinger was quoted in a story by NPR saying some freshly downloaded data from SAM would be “one for the history books.” This fed speculation about what the results could be, although the agency tried to tamp down expectations. Grotzinger said today he was misunderstood, and that he meant that the continuity of data from SAM, and the mission as a whole, would be historic in its breadth and depth.