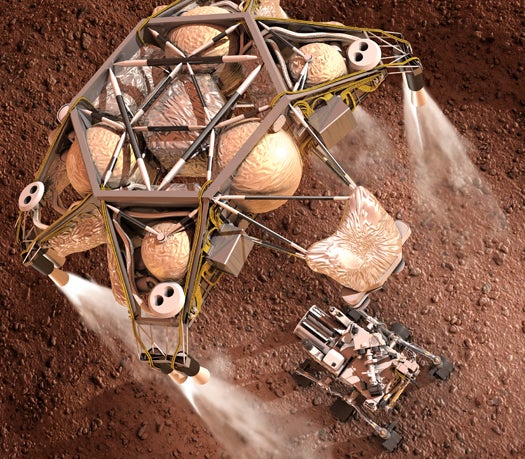 On August 5, NASA’s Mars Science Laboratory will reach the outer edge of the Martian atmosphere. The 8,500-pound craft will have traveled 352 million miles at speeds of up to 13,200 mph, but its real work will have only just begun. Over the next seven minutes it will plummet through 80 miles of atmosphere, withstanding temperatures of up to 3,800°F, and guide itself to a sudden halt in the massive Gale Crater.

The MSL is the most ambitious Mars project to date. Its rover, named Curiosity, is twice as long and five times as heavy as its predecessors, Spirit and Opportunity. Its 150-square-mile landing zone is a third of the size of that of previous missions, requiring unprecedented accuracy. And whereas the previous rovers traveled less than a mile during their three-month-long primary missions, Curiosity will drive up to 12 miles over the course of a full Martian year, which lasts 687 Earth-days.

The MSL’s objective is to determine if Mars has—or ever had—the conditions necessary to support life. And it will do so with the most advanced set of scientific tools included on any off-Earth expedition. The MSL is more than just a Mars mission, though. It is also a test of several newly developed devices and techniques that will drive NASA projects for decades to come, from expeditions to the Jovian ice moon Europa to manned missions to Mars.

Five of the 11 missions that have reached the Martian atmosphere have failed during the entry, descent and landing (EDL) stage, which is why engineers nicknamed the process “seven minutes of terror.” For the MSL mission, researchers rethought how spacecraft undertake EDL. They replaced ballistic entry with a more accurate guided-entry system and developed a new landing method—the sky crane—that could become standard on large rover missions. 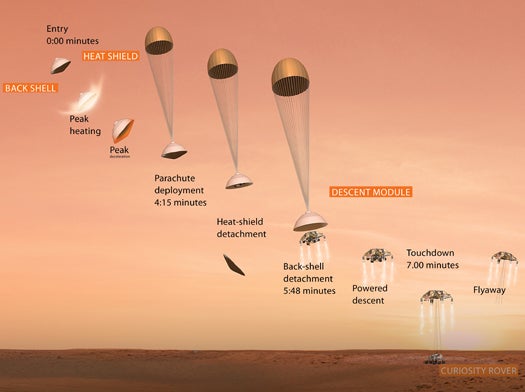 ENTRY 0 minutes
As it begins entry stage, the MSL consists of four major components: a back shell, a heat shield, a descent module and the Curiosity rover. Just before reaching the Martian atmosphere, the MSL will jettison two 165-pound tungsten weights from its back shell. The shift in mass will tilt the craft relative to its direction of travel, generating lift and allowing for some navigational control. The MSL will use eight thrusters on its back shell to guide itself toward the landing zone. Over nearly four minutes, friction will slow the MSL to 1,000 mph, at which point the craft will jettison six more weights, rebalancing its tilt angle relative to its motion.

DESCENT 4 Minutes
Once the MSL slows to 900 mph, it will deploy a 51-foot nylon-and-polyester chute. Within a minute and a half, the craft will decelerate to 180 miles an hour. When the MSL’s radar indicates that it is five miles above the planet’s surface, the heat shield will drop away, and the Mars Descent Imager, a high-definition camera, will begin shooting video that scientists will later use to study the landing site and the surrounding area. About 80 seconds after the heat shield falls away, the MSL’s back shell will detach, and with it the parachute, leaving only the descent module and Curiosity to continue the landing. 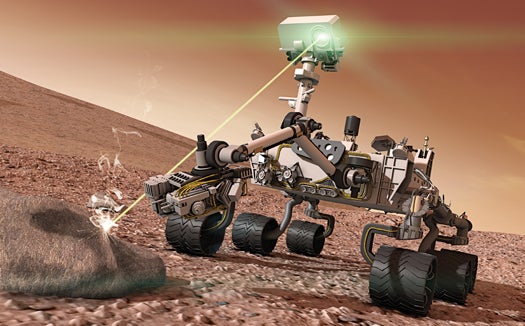 During its primary mission, Curiosity will record weather patterns, analyze air composition, and test rocks for amino acids, methane and other organic compounds that could indicate the possibility of Martian life now or in the past. It will also face freezing temperatures, high winds and other hazards, including sand pits and cliffs. To prepare for such demands, engineers built Curiosity as a new kind of rover—hardier, more autonomous and loaded with more scientific instruments than any craft before it.

POWER
To run a rover as large and energy-intensive as Curiosity, engineers installed a nuclear generator. The 100-pound device will produce 2,700 watt-hours of electricity a day—triple the output of Spirit and Opportunity‘s solar cells—from the decay of 10.6 pounds of plutonium-238. A radiator system will circulate the generator’s waste heat to Curiosity‘s two central computers, warming them during the –130° nights.

NAVIGATION
Although scientists will assign Curiosity specific routes and tasks, the rover will have to accomplish most of its goals autonomously. To spot hazards, it will take 3-D images with a pair of mast-mounted stereo Navcams and two pairs of stereo fisheye Hazcams, which are mounted on its body. The rover will analyze the images with photo-recognition software. If it identifies an obstacle, it will determine a safe route around it.

TARGETING
To ascertain which rocks it should drill, Curiosity will use its Chemistry and Camera (ChemCam) system to take remote readings first. The ChemCam consists of a mast-mounted laser, telescope and camera, and a spectrograph in the rover’s body. The laser will fire a series of infrared pulses at a target of up to 23 feet away. The million-watt zaps will vaporize small areas of the rock, creating flashes of light. The telescope will observe the flashes and transmit them to the spectrometer, which will analyze the light’s wavelengths to determine rock type. If a reading seems promising, mission planners may instruct Curiosity to drill it the next day.

COMMUNICATION
Twice a day, Curiosity will beam its mission data via UHF radio to the Mars Reconnaissance Orbiter (MRO), which has been circling the planet since 2006. Using X-band radio, which has a higher data rate than UHF, the MRO will relay Curiosity‘s data to mission specialists. (Transmissions take between 8 and 22 minutes to reach Earth.) Scientists will use Curiosity‘s imaging and sensing data to plan daily assignments. They will then send assignments directly to the rover on X-band at a preprogrammed time—about 9:30 a.m. on Mars. (How do you tell time on Mars?)

DRILLING
Until now, rovers have had the ability to scrape samples only from a planet’s surface. But the surface is the least likely place to find organic compounds, which degrade in solar radiation. Engineers equipped Curiosity with a six-foot-long, five-jointed robotic arm, at the end of which is a rotary percussive drill powerful enough to bore two inches into rock. The auger pulverizes rock into powder, which is channeled up the threads into a processing unit. There, the powder is sieved to 150 microns and distributed to the rover’s scientific instruments for analysis.

ANALYSIS
To determine whether Mars ever had conditions favorable to life, Curiosity will use two tools: the Chemistry and Mineralogy (CheMin) system and the Sample Analysis at Mars (SAM) instrument. Both sit within the rover body and receive samples from the robotic arm. The CheMin will use x-ray diffraction and fluorescence to search samples for minerals that form under habitable conditions. The SAM will use mass and laser spectrometry and gas chromatography to scan samples for the organic compounds necessary to create life. 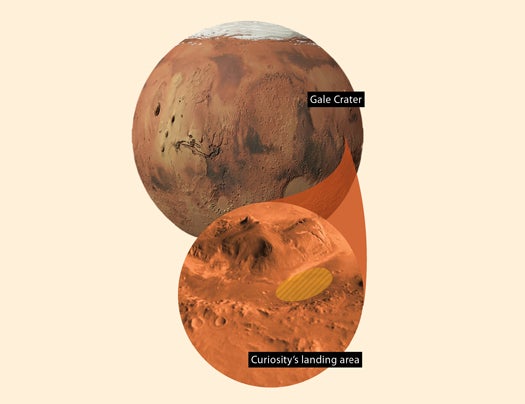 After reviewing 60 landing sites, scientists chose Gale Crater for the Curiosity mission. The rover will explore the lower flanks of a gently sloping mountain in the crater. Of particular interest will be an alluvial fan that could show signs of flowing water and deposits of clays and sulfate salts that could contain organic compounds.