What it might mean for finding life beyond Earth 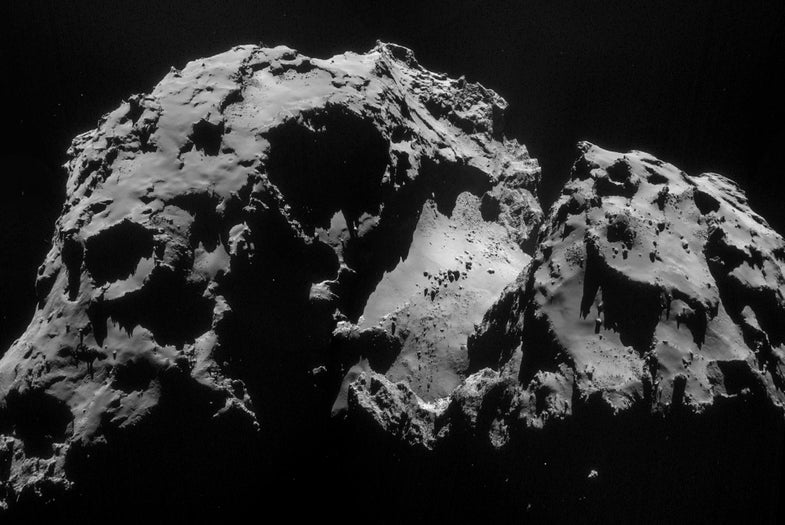 After 10 years of chasing down Comet 67P—and then landing on it—a robotic space mission has returned a tantalizing discovery: the rubber ducky-shaped rock is home to organic molecules of mysterious composition.

Last week, Europe’s Rosetta mission finally deployed its fridge-sized lander to the rocky surface. The lander, called Philae, used some of its last remaining battery power to study the comet and beam any data it could back to Earth.

Its discovery is a big win for science. Made primarily of carbon, organic molecules link together to build the fats, proteins, sugars, and DNA that make up all living organisms on Earth. These molecules are the fundamental building blocks of living things, and they seem to be common throughout the solar system.

It’s not clear yet what kind of organics Philae found. They may be as simple as methane (CH4) or methanol (CH4O). But when Popular Science spoke to Stephan Ulamec, the head of the Rosetta lander team, he hinted that the molecules may not be quite so simple. Larger and more complex molecules can produce similar readings on the device that Philae used, he says, and the team needs more time to work out which molecules it detected.

“We are currently investigating what kind of species these [molecules] are, and this will be published soon,” says Ulamec. “We want to be sure. But it’s definitely several species.”

Because of multiple equipment failures during Philae’s landing, the probe came to rest in a place where it is not getting enough sunlight on its solar panels to recharge its batteries. When its 60-hour battery ran out, Philae began hibernating.

Instead, the findings came from an instrument that “sniffs” the molecules in the space around the comet and uses mass spectrometry to find out what they’re made of.

Mission scientists are hoping that as the comet travels around our star, the lander—which is believed to be stuck in a dark crater—may receive enough sunlight to continue investigating the structure and composition of the comet. In the meantime, Rosetta’s orbiter will fly around measuring the composition of the cloud surrounding the comet, called the coma. 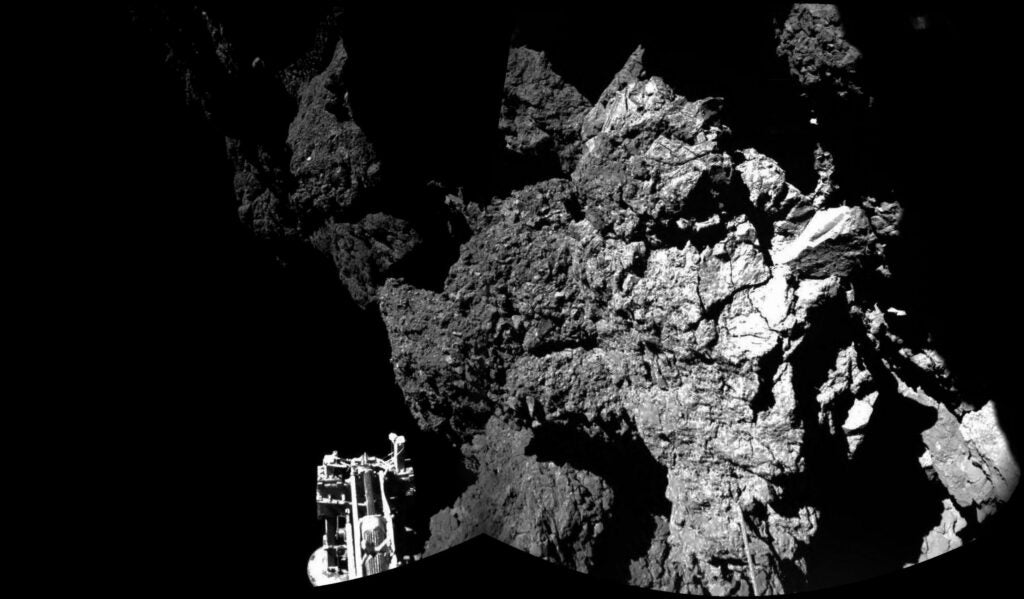 This first-ever image from a comet’s surface shows a steep cliff, with one of the lander’s feet is in the foreground.

What Does It All Mean?

Hydrocarbons have been detected on asteroids, Mars, and other comets, so it’s not a big surprise that Philae found more. Previously, the Rosetta orbiter sniffed out traces of formaldehyde, methane, methanol, and ammonia emanating from the comet.

But Philae’s findings are important because it’s the first spacecraft to actually land on a comet and study it, says planetary scientist Mark Sykes, who’s heading up NASA’s Dawn Mission (another cool spacecraft you’ll soon be hearing more about). For the most part, scientists have only been able to study the molecules in a comet’s coma, using them to infer what’s happening on the surface. That’s not a perfect proxy, though, says Sykes:

“When molecules get lifted off the comet’s surface into the coma, they get broken down by UV radiation from the sun. And it doesn’t take very long to happen. Detecting them on the surface of the comet, that tells us what the original molecules are. It’ll be very interesting to find out what kind of molecules Philae found.”

There’s still a lot of analysis to do. The most exciting (and plausible) things Philae could find would be amino acids, which are the building blocks for proteins.

Scientists think there’s a possibility that the necessary ingredients for life—carbon, hydrogen, phosphorus and nitrogen—may have been delivered to Earth by big space rocks. Finding amino acids on Comet 67P would support that hypothesis.

“I’m not sure we found amino acids, but that, of course, would be very relevant for life,” says Ulamec.

If the molecules do turn out to be amino acids, that’s not proof that life on Earth came from outer space. It just shows that it’s one possibility. Yet, even if they turn out to be simpler organics, Philae’s findings add to a growing body of evidence suggesting that the basic ingredients for life may be common throughout our solar system and throughout the galaxy. That may provide more chances for life to evolve elsewhere.

“All kinds of organic material could play a role when you think of how the formation of life evolved from carbon-rich material to DNA and RNA, and to life forms,” says Ulamec. “This process is not fully understood.”

No matter what the molecules turn out to be, the results are sure to be fascinating, because studying a comet is like opening up a time capsule. These molecules could give scientists a better idea of how our solar system was born and how it evolved over time.

“Most probably, this is pristine material,” says Ulamec. “This organic stuff we find in the comet was probably readily available form the planetary nebula. It was probably there when our solar system formed.” 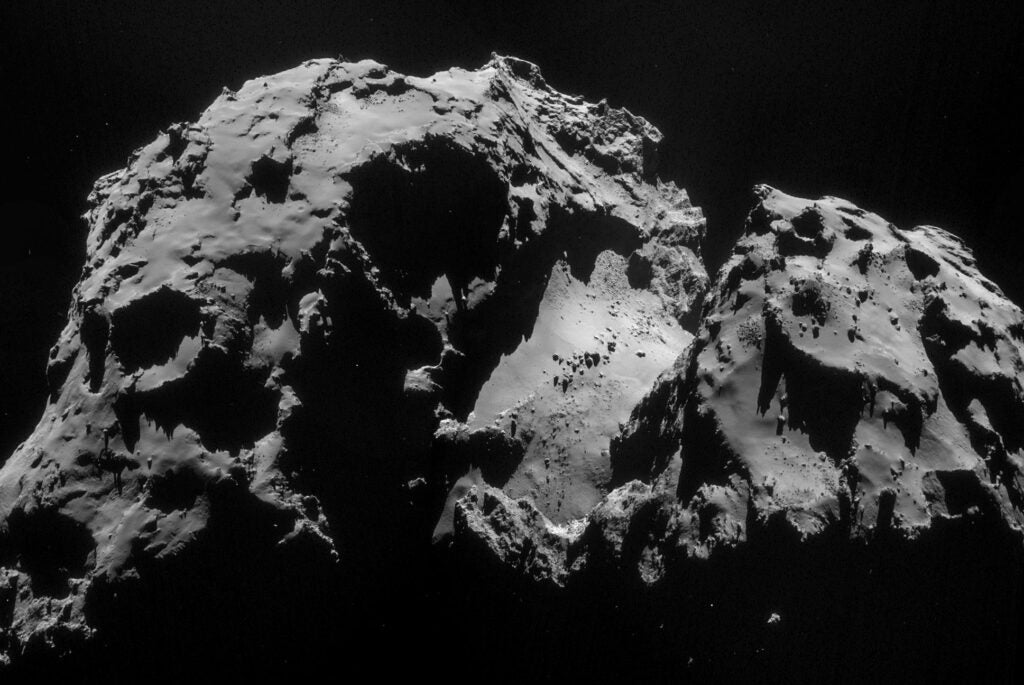