No Organics Yet For Mars Rover Curiosity, NASA Warns

NASA’s forthcoming news conference (scheduled for Monday) about the Mars rover Curiosity’s latest findings may not be so “earth-shaking,” it... 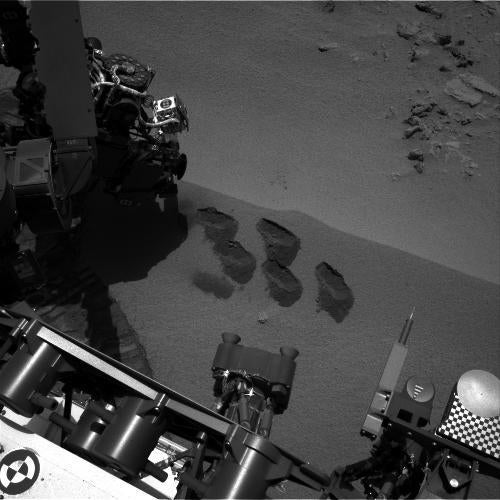 NASA’s forthcoming news conference (scheduled for Monday) about the Mars rover Curiosity’s latest findings may not be so “earth-shaking,” it turns out. The busy rover has not found any evidence of organic material on Mars–at least not yet.

Last week, a report on NPR about a discovery “for the history books” fueled speculation that Curiosity’s Sample Analysis at Mars instrument had seen something interesting. Curiosity’s principal investigator, John Grotzinger, was looking at incoming data during an interview with an NPR reporter, and he got excited–leading to a story by NPR’s Joe Palca about how scientists have to keep their results under wraps until they’re sure what they see. But everyone kept talking about Grotzinger’s quotes, saying SAM had seen something historic. We had a few ideas about what it could be.

Now NASA is finally tamping down expectations, announcing today that there’s no evidence yet for organic material on Mars. Organic in this case means carbon-based complex molecules, not living or formerly living matter. Instead, Curiosity scientists will be sharing data from the first use of the rover’s full array of analytical instruments, NASA said today.

Still, the news conference at the American Geophysical Union is sure to have some interesting news–so stay tuned.