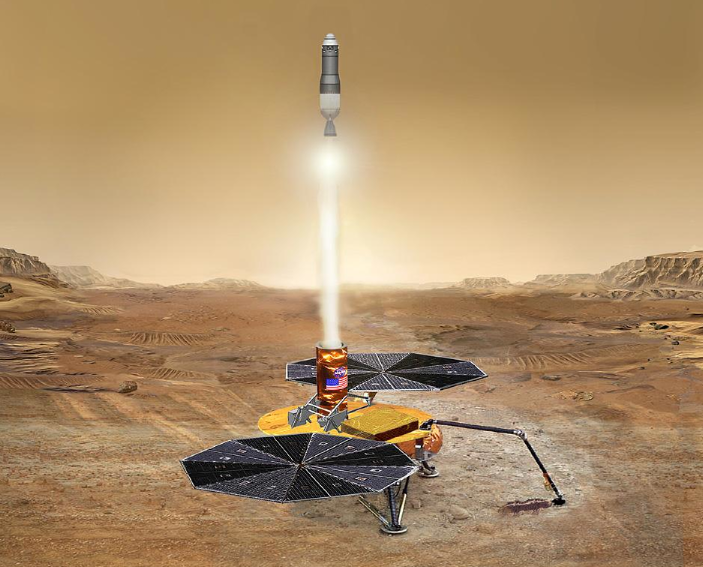 NASA’s next Mars moves should focus on bringing chunks of Mars back to Earth, possibly in a hand-off between a robot and an astronaut, according to a new planning document. Involving humans in a space-based rock swap would ensure the sample is protected and Earth is protected — and it would probably make sense anyway, given the timing and budget constraints for NASA’s Mars plans.

NASA’s Mars Program Planning Group final report, released Tuesday, lays out several options NASA could pursue to bring samples of Mars rocks to Earth-based scientists, one of the key goals outlined in a major 2011 scientific priorities list. NASA is weighing those options but won’t announce its choice until early 2013, when the president releases his fiscal 2014 budget request.

Orlando Figueroa, who led the MPPG team, told reporters that NASA could start planning the mission’s overall architecture in the 2018 or 2020 launch windows, when Mars is close enough to Earth for a favorable journey. That’s likely to include a new Mars orbiter, in part because NASA has just $800 million to work with through 2018, not enough to launch another rover. The MPPG was created earlier this year in response to cuts in NASA’s robotic exploration programs.

Mission pieces could include fleets of mini-rovers, two-axle vehicles that spool from landers and roll down hills, and even a supersonic sky crane for delivering cargo.

NASA also has to decide how many pieces to launch — a sample return mission could be a one-shot deal with a soil-collecting rover, a rocket to blast off Mars, and an orbiter to rendezvous with a craft in space or bring it back to Earth, or it could include those stages in two or three separate steps. The individual pieces are all still in design stages, and could include small landers; fleets of miniature rovers; two-axle vehicles that spool from a lander and can roll down slopes; an orbiting atomic clock for better telecommunications relays; and even huge supersonic-capable sky cranes for delivering heavy cargo.

Whatever it looks like, a sample return mission could very well involve people, said John Grunsfeld, associate administrator for NASA’s Science Mission Directorate and a former astronaut. Planning a sample return concurrently with human exploration could reduce costs and add redundancies that could make a mission safer. If NASA follows the timeline it’s on, it could be the late 2030s or even 2040s before a sample comes back from Mars — but that’s about the same timeframe President Obama set for sending humans there, Grunsfeld noted.

“If we can get a sample either in Mars orbit or coming back toward Earth, we can find almost serendipitous, just by planning, opportunities where a human can grab the sample,” he said. “Now that’s probably not a guy in an EVA suit with a baseball mitt grabbing a rock.”

Rather, a sealed capsule, already protected with one or two levels of containment, would fly from Mars orbit or en route to the Earth-moon system and rendezvous with a space capsule, where humans could grab it with a robotic arm and put it in a protective bay.

Deciding where to go get the rocks would also require debate. To date, NASA has avoided landing in any potentially warm, wet or salty locations on the Red Planet where life might be found, or at the very least where it might survive once it landed — but rocks for those environments could be precisely the ones scientists most want to get their hands on.

“We know there is life on Mars, because we’ve sent the life there on our rovers,” Grunsfeld explained. “If we want to go detect potential Martian life in a current habitable environment, we need to work a lot harder to not contaminate Mars with microbial life that we brought with us, and that is still a challenge.”

The clock is ticking, and now NASA officials will pore over Figueroa’s document and decide how to set priorities for the new budget, Grunsfeld said. 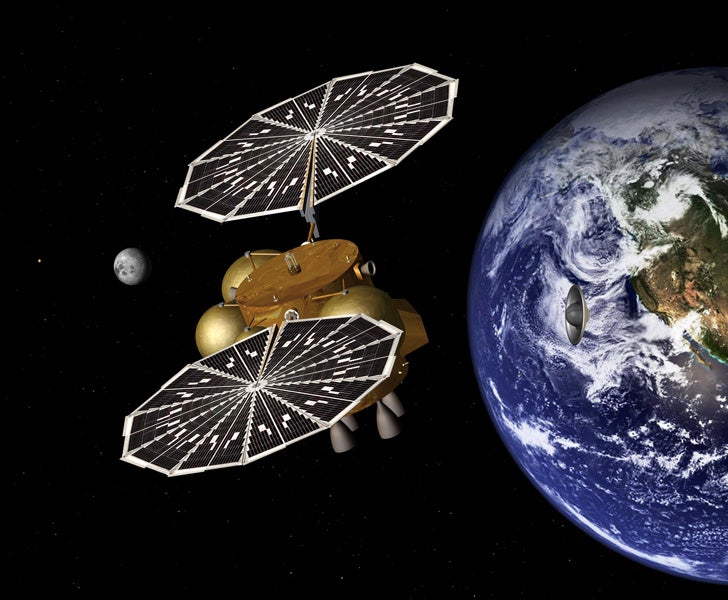 This artist’s concept of a proposed Mars sample return mission portrays the separation of an Earth entry vehicle, bearing a container of Martian rock samples, from the main spacecraft that would have carried it from Martian orbit nearly to Earth. This is one possible architecture for a future Mars sample return; others involve humans in orbit, either around Earth or Mars, bringing the sample back themselves.