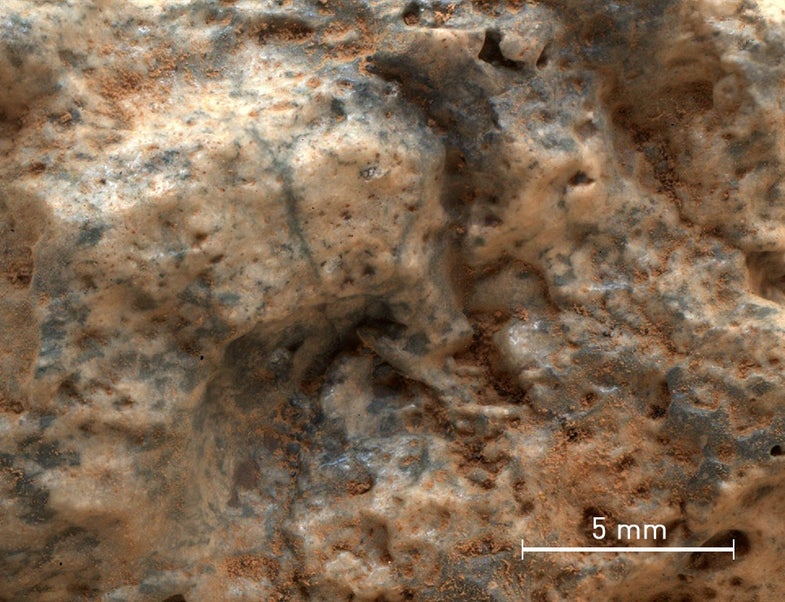 Earth and Mars are very different in many ways, but there are lots of striking similarities too. We’ve both got beautiful auroras, naturally-occuring glass, and water (at least snow and ice, in the case of Mars). And now it looks like our neighboring planet might also have an origin story very similar to our own.

In a paper published today in Nature Geoscience researchers looked at around 20 of the rock samples analyzed by the Curiosity rover (with a laser!), and found something interesting. Many of the rocks that they analyzed in Gale Crater (where Curiosity is located) were light-colored and had a very similar chemical composition to rocks here on earth.

More specifically, they looked like rocks found in the continental crust here on earth. The Earth’s crust is divided up into solid tectonic plates that move around on a melty, squishy mantle deeper inside the planet. Some of these plates are thinner (approximately 4-6 miles thick), darker, and heavier. These plates tend to make up the oceanic crust, or all the rocks underlying the oceans. Then there are the plates that are thicker (approximately 15-40 miles thick) and generally more light-colored, and also made of more light-weight rocks. Scientists thought for a long time that Earth was the only planet with a continental crust, because typically it takes a very long time on a very active planet for the lighter rocks to rise to the surface and form into the chunks that make up the continental crust.

But now, it looks like Mars might have gone through a very similar process at some point, giving us new insight into the biography of the planet. More research is still needed to confirm that Mars went through the same process, but the early signs point to some interesting parallels between the two planets. In the meantime Curiosity is still chugging along, zapping rocks with lasers for more clues about the Red Planet’s mysterious past and present.