Two new experiments show how easy it would be to infect Mars with alien microbes.

A species of hardy bacteria found anywhere from human skin to plant roots can survive in a Mars-like environment, a new study says. The finding has implications for extraterrestrial life, but maybe more importantly, there are implications for planetary protection. Could stowaway microbes hop off the Mars rover Curiosity (or its descendants) and make a new life on the Red Planet?

Astrobiologists like studying extremophiles, those bacteria and other creatures that live in horrid temperatures or pressures, because they could conceivably live in the hostile environs of other planets. But Serratia liquefaciens is a generalist, as the authors described it–it evolved probably at sea level and lives in plant, animal and aquatic worlds.

To understand how well future human missions might imperil Mars with our filthy life forms, microbiologists led by Andrew Schuerger at the University of Florida set out to test how well common Earth bacteria could survive in Mars-like environments. There’s a surprising lack of data on this matter, the authors say in their paper, which was published this week in the journal Astrobiology.

They worked with 26 strains of 22 types of bacteria that have been recovered before from spacecraft, and would therefore be the likeliest to hitch a ride to a hospitable spot on Mars. Importantly, the researchers assume the bacteria would survive the harmful radiation to which they would be subjected on the journey–but still, the study has some important findings.

The team grew bacterial colonies in dishes and then turned down the heat, the pressure and the oxygen. Hyperbaric chambers reduced atmospheric pressure down to just 7 millibar, with many strains perishing as the conditions worsened. (Earth atmospheric pressure is about 1,000 mbar.) S. liquefaciens was able to survive at 7 mbar, freezing temperatures, low oxygen and increased carbon dioxide–just like the conditions on Mars. Interestingly, two known extremophile species did not make it. 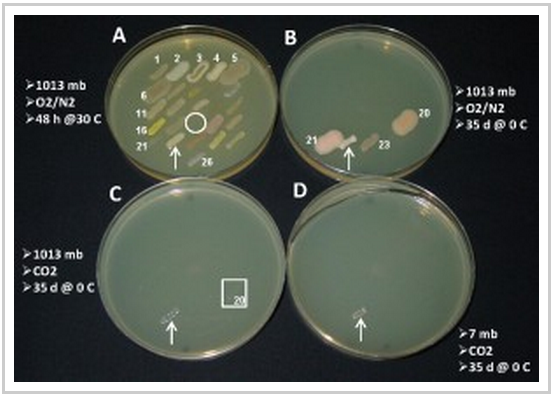 Plate A shows a control group grown under standard Earth pressure (1013 millibars) and oxygen, living at 86 degrees Fahrenheit. Plate B shows the bacteria that can survive when temperature is dropped to freezing. Plate C shows the bacteria that survived with freezing temperature and no oxygen. Plate D shows bacterial growth at pressure as low as that on Mars (7 millibars), no oxygen and freezing temperature. Only one bacterium, Serratia liquefaciens, survived those harsh conditions. Arrows indicate locations of the bacteria.

In a different study, Schuerger and colleagues looked at thousands of strains of bacteria recovered from core samples drilled 40 to 70 feet into the Siberian permafrost. The thought was that these microbes might survive in a permanently frozen area on Mars that could be an interesting target for future life-hunting missions. Among that sample, six bacterial species–all from the cold-loving genus _Carnobacterium_–survived Mars-like conditions and continued to grow. That study was published Dec. 24 in the Proceedings of the National Academy of Sciences.

The studies do not prove that life could grow on Mars, the authors warn. The radiation hazard is one major key that would probably prevent spacecraft stowaways from colonizing Mars. But still, the hardiness of these bacteria–especially one that was not considered an extremophile–is a sign that more work needs to be done to try and answer that question.