First Mars Landers Might Have Found Organic Material In 1976, and Destroyed It By Accident

The building blocks of life might exist in Martian soil after all, according to a new study. Evidence from the... 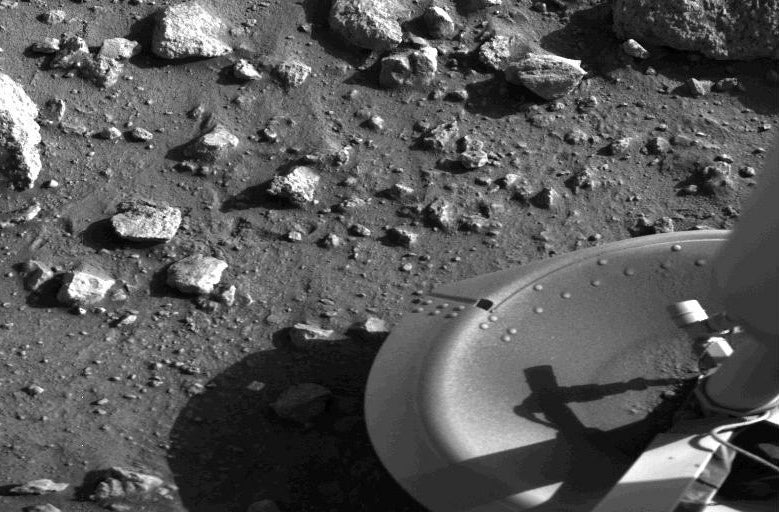 The first image from the surface of Mars, taken by Viking 1 moments after it landed July 20, 1976. NASA
SHARE

The building blocks of life might exist in Martian soil after all, according to a new study. Evidence from the late Phoenix Mars lander suggests its Viking forebears might have found organic compounds on the Red Planet — and destroyed them in the process of looking for them.

If this is true, it represents a monumental shift in the way scientists have thought about Mars for the past 30 years. The presence of native Martian organics suggests the planet might not be a dead rock after all.

The study came about after the Phoenix lander found perchlorate in the soil at the Martian north pole, where scientists had expected to find chloride salt instead. Perchlorate is an ion of oxygen and chlorine that breaks into highly reactive fragments when it’s heated. The fragments destroy organic compounds.

The perchlorate fragments form at the same temperatures to which the Viking craft baked Martian soil samples. The Vikings found chloromethane and dichloromethane, chlorine compounds interpreted at the time as likely contaminants from cleaning fluids or rocket fuel.

But in the new study, researchers found exactly those chemicals when they added some perchlorate to desert soil from Chile and baked it in the same manner as the Viking tests. Atacama desert soil is thought to closely resemble Martian soil and is known to contain organic compounds.

“Our results suggest that not only organics, but also perchlorate, may have been present in the soil at both Viking landing sites,” said the study’s lead author, Rafael Navarro-González of the National Autonomous University of Mexico, Mexico City.

Of course, this study does not mean Mars is a cozy place for life, and it does not prove that life has ever existed there, the researchers say.

Even if Mars never had life, it probably should have some organics, simply because of the number of meteorites that contain them. Before Viking, this is what scientists expected. NASA astrobiologist Chris McKay, who participated in the latest study, said the Vikings did detect organics — we just did not realize it.

At the very least, the discovery could lead to a new way to search for life on Mars. If Martian soil contains organic material on the parts-per-million scale, it makes sense to search for molecules like DNA or complex proteins.

NASA’s Curiosity Rover, scheduled for launch in November 2011, has the ability to search for organic compounds by adding liquid to soil samples, which would not subject them to the high temperatures at which perchlorate destroys organic compounds, according to NASA.

The study is reported in an upcoming edition of Journal of Geophysical Research–Planets.