Here’s What Methane-Based Life On Titan Could Look Like

What if water isn't essential for life to exist? 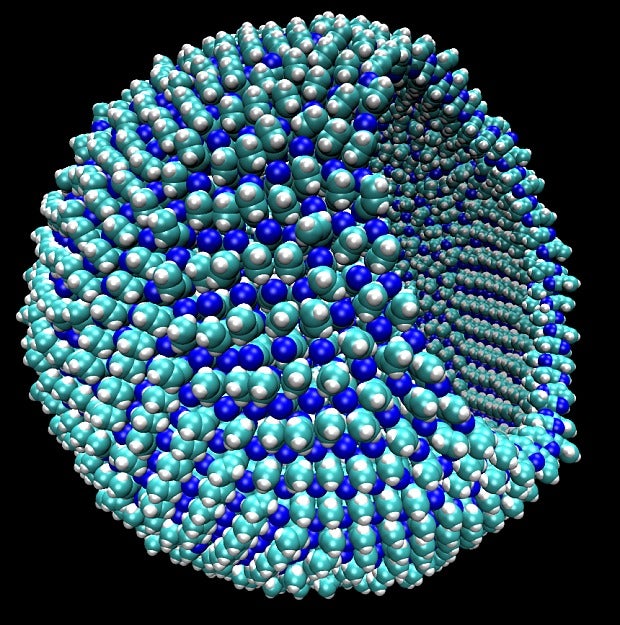 Despite what Kurt Vonnegut says, Saturn’s largest moon Titan wouldn’t be a very fun place to visit. The natural satellite boasts temperatures of -290 degrees Fahrenheit, as well as vast seas filled not with Earth’s life-sustaining water, but with liquid methane. It’s also possible that numerous active volcanoes on Titan burp out methane into the atmosphere, creating clouds that precipitate the chemical compound as rain or snow.

While humans (and all other forms of Earth life) would have a hard time coping in this chilly, waterless environment, researchers believe that life could still be possible on Titan. It just wouldn’t be like anything we’ve ever seen before. In a new report, published in Science Advances, a team of chemical engineers and astronomers from Cornell University paints a picture of the types of organisms that may thrive on Titan, theorizing the moon could be home to methane-based, oxygen-free beings with a completely different type of cell structure.

On our planet, living cells have an outer membrane comprised of a lipid bilayer—a barrier that separates the intracellular water-based fluids from the extracellular ones. A hollow vesicle enclosed by a lipid bilayer is known as a liposome, or a “lipid body.” The research team envisions that Titan residents may also be comprised of cells, but instead of an outer shell of lipids, their cell membranes would be comprised of compounds based on methane, which has a much lower freezing point than water.

This theoretical membrane, dubbed an “azotosome” (or “nitrogen body”) by the researchers, would contain nitrogen, carbon, and hydrogen molecules—all of which can be found in Titan’s super cold methane seas. The azotosome would be both rigid and flexible like a lipid membrane, controlling the transportation of materials into and out of the cell.

To see if such life forms are even possible, the researchers screened for potential chemical compounds found in cryogenic methane that could assemble themselves into membrane-like structures. They stumbled upon acrylonitrile (C3H3N), a colorless liquid compound that is present in Titan’s atmosphere. As a membrane, acrylonitrile showed good stability and acted as strong barrier to decomposition, important qualities for a cellular membrane.

The researchers noted their surprise at finding a membrane model that could work. “We didn’t come in with any preconceptions about what should be in a membrane and what shouldn’t,” Paulette Clancy, a chemical molecular dynamics expert at Cornell, said in a press release. “We just worked with the compounds that we knew were there and asked, ‘If this was your palette, what can you make out of that?'”

Now the researchers just need to figure out how these cells would behave in a methane environment, and maybe someday, a robotic mission to Titan could determine whether they really live there.