What ‘Earth-Shaking’ Evidence Did The Mars Rover Curiosity Just Find?

"One for the history books," says Curiosity's chief investigator 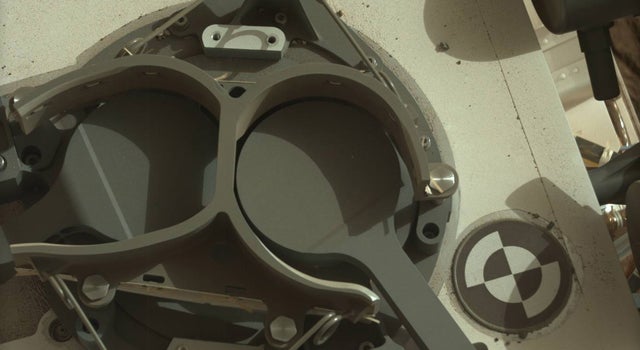 Did the Mars rover Curiosity sniff signs of life last week? It’s not clear yet, but scientists have definitely seen something interesting. Everyone is keeping mum, but potential findings by the Sample Analysis at Mars instrument, one of Curiosity’s prime life-hunting instruments, have Mars-watchers on the edges of their seats.

Curiosity’s principal investigator, John Grotzinger, was quoted on NPR Tuesday morning saying the team might have some very big news soon. “Earthshaking” was the word of choice from NPR’s science correspondent, Joe Palca. Palca was apparently in Grotzinger’s office when some of the data from SAM started streaming in through the Deep Space Network last week. Grotzinger wouldn’t tell, but his excitement was obvious: “This data is gonna be one for the history books. It’s looking really good,” he said.

SAM is one of Curiosity’s key science instruments, specifically designed to look for evidence of past life-friendly environments. It is looking for carbon-based molecules, which may or may not indicate life. All life as we know it on Earth contains organic molecules, but organic molecules can exist without any life–scientists have seen signs of carbon compounds on Pluto and elsewhere in space, for instance. Finding them on Mars would definitely be intriguing. At the very least, they’ll indicate that Mars could play host, now or in the past, to organic material. That might, might indicate that it could have hosted life, too.

What could it have found?

SAM might have found evidence for some organic material, or it could have found nothing. A nil result would be scientifically interesting, too, because it would help round out the history of Gale Crater. But it’s safe to assume that Curiosity’s principal investigator probably wouldn’t describe a nil result as one for the history books.

Even if SAM found some organic molecules, it’s still a long way from finding hard evidence for life, or even evidence that Gale Crater could have been a haven for life in the distant Martian past. But it will be a step toward answering that question. Curiosity’s science team already found clear-cut evidence for lots of liquid water in the past, and life as we know it needs water, too.

What is SAM, anyway?

It’s a huge part of Curiosity, both physically and metaphorically. Physically speaking, it’s a gas chromatograph and two kinds of spectrometers, which can identify compounds inside Martian rocks and soil. The gas chromatograph will bake rocks and soil until they start to vaporize, and analyze the resulting vapors. The mass spectrometer will measure the masses of different elements and minerals, and the tunable laser spectrometer–which we met a week or so ago, when it did not sniff much methane on Mars–will measure the abundances of carbon, hydrogen and oxygen compounds.

Why are people so excited?

Grotzinger is a cautious scientist, and showed restraint during those recent methane findings, as Palca also pointed out. At first, the team noticed a strong methane signal, which created a buzz in the scientific community. But they wanted to be sure it wasn’t methane from Earth contaminating Curiosity’s instruments, so they made another measurement. Turns out it was Earthly methane the first time, and more detailed analysis showed a negligible amount of the hydrocarbon–not much reason to get excited.

The MSL team is showing caution here, too. Part of the reason is probably that SAM is still doing some work. The instrument contains a self-test kit, which it will use to validate its findings and ensure there are no false positives. The kit is a ceramic sample-blank that contains a known engineered fluorinated organic compound that would not occur in real life on Earth. SAM can use that to double-check what it sees.

But still–when a high-ranking scientist like Grotzinger starts dropping words like “history” and “really good,” odds are something interesting in the works. He told NPR it would likely be a few weeks before the team is ready to talk about it–so stay tuned.