Where Should We Look For Earth’s Twin?

Not where you'd think. 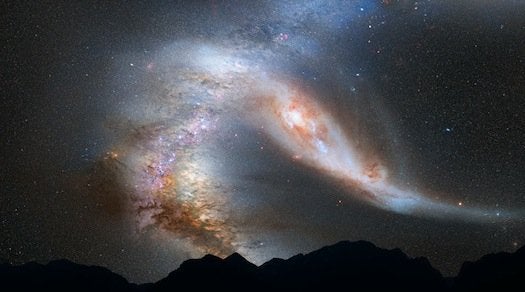 The question of how and where life arose on Earth is a massively complex puzzle. The puzzle pieces themselves–the physical evidence of what really happened–have long since vanished. The best biologists can do is to try reconstructing what the pieces might have looked like, and how they might have fitted together. Every breakthrough in origin-of-life studies to date has been an important but very small step toward a convincing explanation of how it really happened. It may be that life is inevitable, given the right conditions, as Sagan thought. It may equally be that life is terribly, terribly unlikely to happen, even under the best of circumstances. The fact that life on Earth survives in so many harsh environments, moreover, doesn’t prove that life arises easily. It proves only that that life can adapt like crazy after it arises.

If you’re a pessimist, therefore, you might conclude that the search for extraterrestrial life might well prove to be fruitless. If you need further ammunition to bolster your pessimism, you might take a look at the book Rare Earth, published by paleontologist Peter Ward and astronomer Don Brownlee in 2000. The authors advance a series of arguments to suggest that while life might well be common in the Milky Way, the sort of advanced life we’d really love to find is very rare. Each argument by itself sounds pretty convincing; taken together, they appear at first to be devastating.

If Jupiter didn’t exist, we would get 10,000 more comets smashing into Earth.

Take Jupiter, for example. If our biggest planet had spiraled in toward the Sun to become a hot Jupiter, it would probably have disrupted Earth’s orbit. But if we had no Jupiter at all, that could be a problem as well. The reason, argue Ward and Brownlee, is that Jupiter shields the Earth from comet impacts. Comets originate from the outer solar system, and most of them stay there. When one does fall in toward the Sun, however, it’s almost always flung away by Jupiter before it can get anywhere near Earth. The astronomer George Wetherill showed decades ago that if Jupiter didn’t exist, we would get about ten thousand times more comets smashing into Earth than we do–not a good thing for the emergence and evolution of anything more advanced than bacteria.

Ward and Brownlee also point out that our Moon is much bigger in relation to Earth than any planet-moon pair in the solar system. It’s so massive that its gravity helps stabilize the tilt of the Earth. Mars, whose moons are tiny, wobbles something like a spinning top that’s close to falling over. Without the Moon, our planet would do the same, making the seasons highly unstable and making it hard for plants and animals to adapt.

And then there’s plate tectonics, which recycles the Earth’s crust back into the interior over hundreds of millions of years. That process also recycles carbon dioxide after it binds chemically to surface rocks, ensuring that the atmosphere doesn’t undergo a runaway greenhouse effect, turning our planet into a hothouse like Venus. Of all the rocky bodies in the solar system, only Earth has plate tectonics, so it’s probably rare in the universe. And then there’s Earth’s magnetic field, which protects us against energetic particles streaming in from the Sun or from deep space. And then… well, suffice it to say that Rare Earth makes a sobering read.

It does, that is, until you talk to Jim Kasting. “A lot of people read [Rare Earth] and believed it,” he told me during a conversation at a Vietnamese restaurant in Seattle. “I think they sold a lot of copies because it was the anti–Carl Sagan. It appealed to people who didn’t want to believe this whole line of stuff that Carl had been selling.”

Discard the notion that life is confined to the surface of a planet, and you’ve suddenly got a lot more places to look.

One by one, Kasting addressed the arguments in Rare Earth and made it clear that he wasn’t impressed. For example, he said, it’s true that if you eliminated the Moon, Earth’s tilt would wobble chaotically. But if Earth were spinning faster–if the day were twelve hours long rather than twenty-four–the chaos would go away. “So you have to ask,” said Kasting, “How fast would the Earth be spinning if you didn’t have the Moon? And that’s complicated.” In short, Ward and Brownlee raise a plausible argument, but hardly a definitive one.

It’s also true, continued Kasting, that Jupiter protects Earth from comet impacts. But it actually raises the odds we’ll be struck by asteroids. That’s because the asteroid belt is just Sunward of Jupiter, so it’s relatively easy for the giant planet to nudge a mountain-size chunk of rock into an Earth-crossing orbit. “It appears,” Kasting writes in his 2010 book How to Find a Habitable Planet, where he devotes a full chapter to presenting counterarguments to Rare Earth, “that having a Jupiter-sized planet… is a mixed blessing.”

As for plate tectonics, he said, Venus is the only other planet in our solar system besides Earth big enough to have them in the first place (a planet smaller than Venus would have cooled off by now, so it wouldn’t have the semi-molten rock that allows continents to slide around). But Venus lacks the water it would need to lubricate the motion of crustal plates, which could be why, despite its adequate size, it doesn’t have plate tectonics. Out of two planets that might have plate tectonics, one of them does, and Kasting sees no reason at all to assume that Venus is somehow typical of exoplanets while Earth isn’t.

There’s probably life all over the place.

The bottom line, he said, is that “there are a lot of things that we don’t know, so we make conjectures. Ultimately, if we can do TPF and follow up with post-TPF missions, we’ll figure out what happens, and where.” “I’m an optimist,” he admitted. “I agree with Carl Sagan. I think there’s probably life all over the place, and there are probably other intelligent beings. I’m just not as good at speculating as he was.”

There’s another reason you might lean in the direction of optimism. The concept of the habitable zone applies if you’re assuming life is confined to the surface of a planet. If you discard that assumption and consider places where conditions are favorable beneath the surface, you’ve suddenly got a lot more places to look. In our own solar system, Earth has the only habitable surface, but planetary scientists think the Martian subsurface might be habitable as well. In November 2011, NASA launched its biggest, most capable rover toward Mars, where the six-wheeled, SUV-size Curiosity will, among other things, drill into the Martian soil to look for organic chemicals (but not, on this mission, for life itself).

The right conditions for life could also exist on even more exotic worlds. Astronomers have known for years that Jupiter’s moon Europa and Saturn’s moon Enceladus both have subsurface water. The energy to keep the former from freezing solid right down to the core comes from tidal squeezing, as it orbits through the powerful gravitational field of Jupiter; Enceladus’s heat source is a mystery. More recently, theorists have suggested that even Pluto might harbor liquid water, one hundred miles or so beneath its icy surface–the heat in this case coming from the decay of radioactive potassium. As for complex carbon molecules, they’re abundant in the bodies of both comets and asteroids, which have been crashing into the moons and the outer planets for billions of years.

Yet another plausible reason for optimism arises from the fact that the universe is under no obligation to follow the “life as we know it” rule. Carbon is abundant in the Milky Way and combines easily with other atoms to form the elaborate organic molecules that underlie all of terrestrial biology. Water is abundant as well, and acts as a versatile solvent. So it’s not absurd to think that carbon-based life might be universal, and is exactly what astrobiologists should be looking for.

Excerpted with permission from Mirror Earth: The Search for Our Planet’s Twin (Walker & Company) out today. Michael D. Lemonick is a senior writer at Climate Central, Inc. and a former staff writer for Time. Mirror Earth is his fifth book. Buy it here.