Maybe Alien Life Runs On Cosmic Rays Instead Of Sunlight

Deadly radiation could be breakfast for microbes on rogue planets, comets, and more 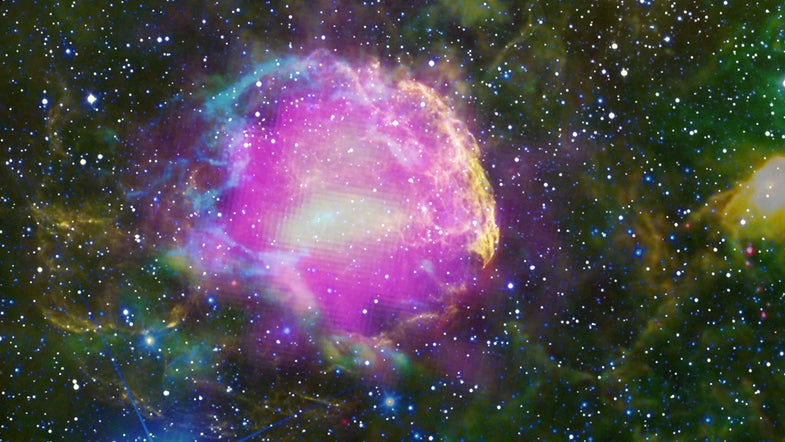 Earth is very much powered by the sun. Beams of photons shoot down at us, dumping their energy into green plants. Then we eat the plants, or we eat the animals that eat the plants (or so on, up the food chain), and we too indirectly absorb that sweet solar energy.

For rogue planets that don’t have a star to orbit, wandering alone through dark interstellar space, cosmic rays may provide a similar function to sunlight here on Earth. The idea, proposed in a new paper in the Journal of the Royal Society Interface, is that these beams of high-energy radiation could power underground ecosystems on worlds without much sunlight or atmosphere.

The hypothesis is a spin-off of a phenomenon that happens on Earth. Deep underground, the bacteria Desulforudis audaxviator survives by eating the byproducts of radioactive uranium, thorium, and potassium. Just as plants on the surface use the sun’s energy to split water into a building block for carbohydrates (food), this bacteria takes advantage of the particles that zip off of radioactive rocks. Those particles split water into pieces that can combine with other molecules to form the bacteria’s food.

The new paper, authored by astrobiologist Dimitra Atri from the Blue Marble Space Institute of Science, suggests galactic cosmic radiation could provide the energy to split water and other molecules into useful forms.

Since there are Earth ecosystems that work in a similar way, the hypothesis “sounds entirely plausible,” says NASA astrobiologist Chris McKay, who wasn’t involved in the research.

Although cosmic rays can cause deadly damage to DNA, D. audaxviator proves that organisms can and do evolve protections. And living underground would keep the alien microbes safe from the worst of the radiation.

Atri’s simulations suggest cosmic rays are abundant enough, and penetrate far enough under ground, to potentially sustain underground life on the moon, comets, Mars, Pluto, and the outer shell of Europa. Of course, those hypothetical organisms would still require food, water, and presumably a heat source.

McKay noted that if any organisms are indeed fueled by cosmic rays, they would have very slow metabolisms. “The total energy in cosmic rays reaching the surface even of an airless body is tiny compared to the level of sunlight that reaches the surface of the Earth and is used by photosynthesis,” he explains.

Chances are low that such an ecosystem would evolve complex, multicellular life, says Atri. “The energy itself is so small, and because of the high radiation, the organism would have to spend a lot of energy repairing damage from radiation. It uses a lot of its energy in this process.”

If there is life that thrives on cosmic radiation, Atri says, it probably looks similar to D. audaxviator.

The idea is just a hypothesis, for now. Atri hasn’t yet put the theory to the test, but he hopes to. He’d like to start by exposing D. audaxviator to radiation from a particle accelerator (scientists’ closest approximation to cosmic rays), and see if the bacteria are able to survive and thrive on it. If they can, that would show the idea is at least possible, and it would open up new stretches of the solar system and beyond to the search for alien life.