This is what it went to Mars to do. Drill, baby, drill! 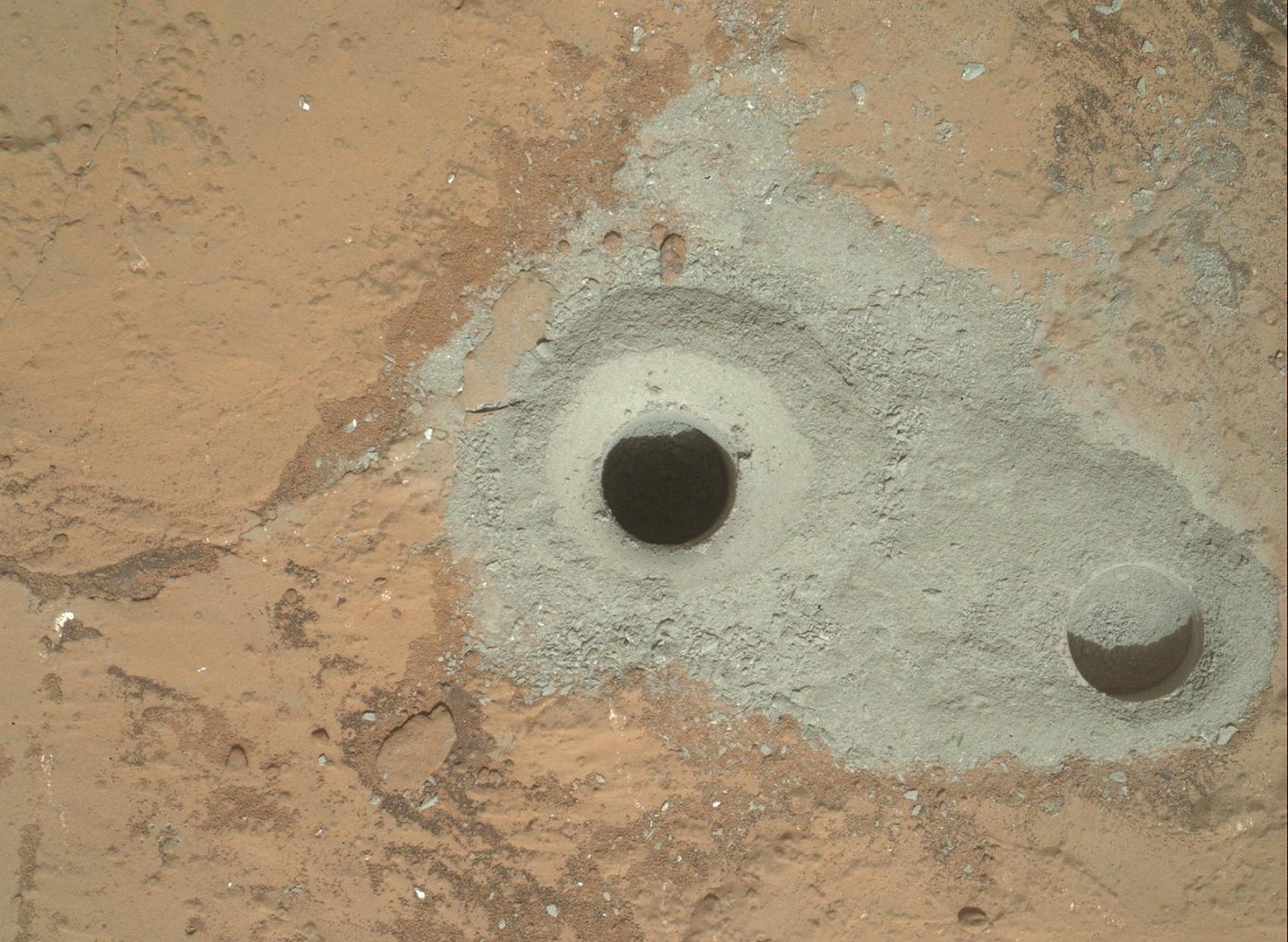 At the center of this image from NASA's Curiosity rover is the hole in a rock called "John Klein" where the rover conducted its first sample drilling on Mars. The drilling took place Feb. 8, or Sol 182, Curiosity's 182nd Martian day of operations. NASA/JPL-Caltech
SHARE

America’s car on Mars is finally being allowed to do what it was designed to do–fire up its hammer drill and bore into the Red Planet. After 182 sols (Martian days) of work, the the first robot equipped to take a bite out of another world got its first taste. To be sure, the Mars rover Curiosity has done some amazing things already, but this has to be pretty satisfying for the engineers who built it. It’s like having a coupe that can hit top speeds of 200 MPH, but you can’t do that yet because it might not be safe–but then suddenly you can!

Curiosity ran some tests last week before making its first hole Friday, and beaming back data to Earth on Saturday. The fresh hole is 2.5 inches deep and about 0.63 inches (1.6 cm) wide. The target rock is called “John Klein,” and it’s a flat exposed piece of bedrock in the Yellowknife Bay region of Gale Crater on Mars.

This rock is interesting to scientists because they believe it holds evidence about extinct wet environments on Mars. Curiosity is uniquely equipped to study the rock’s insides to find out about its past.

Along with boring through rock, the drill sucks up the dirt it produces. Rock dust travels up flutes in the drill bit and is stored in chambers until Curiosity is ready to use it. Like it did with its first scoop samples, Curiosity will swish dirt around in its sample mechanisms to make sure it rinses away any possible Earth contamination. Then its robotic arm will take the powder out of the drill assembly and put it into the scoop mechanism, which will sift it around to screen out any particles bigger than six-thousandths of an inch across. Then the very fine-grained powder sample will go into Curiosity’s X-ray machine and oven to be tested.

Planetary scientists hope to find out what minerals are present within John Klein, which can tell them about how the rock formed–whether it was in a wet environment, a salty environment, and so on. The main goal is to find out whether Gale Crater could have ever been a hospitable place for life. Scientists were thrilled about the drilling operation, according to NASA.

“This is the biggest milestone accomplishment for the Curiosity team since the sky-crane landing last August, another proud day for America,” said John Grunsfeld, associate administrator for NASA’s Science Mission Directorate.

Scientists will be working on the drill powder analysis during the next few days.