How Do You Tell Time On Mars? 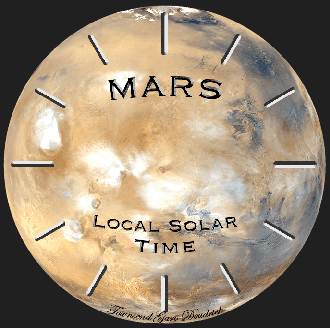 This is a watch face designed by a specialty watchmaker in Montrose, Calif., who built them for Mars rover drivers. JPL
SHARE 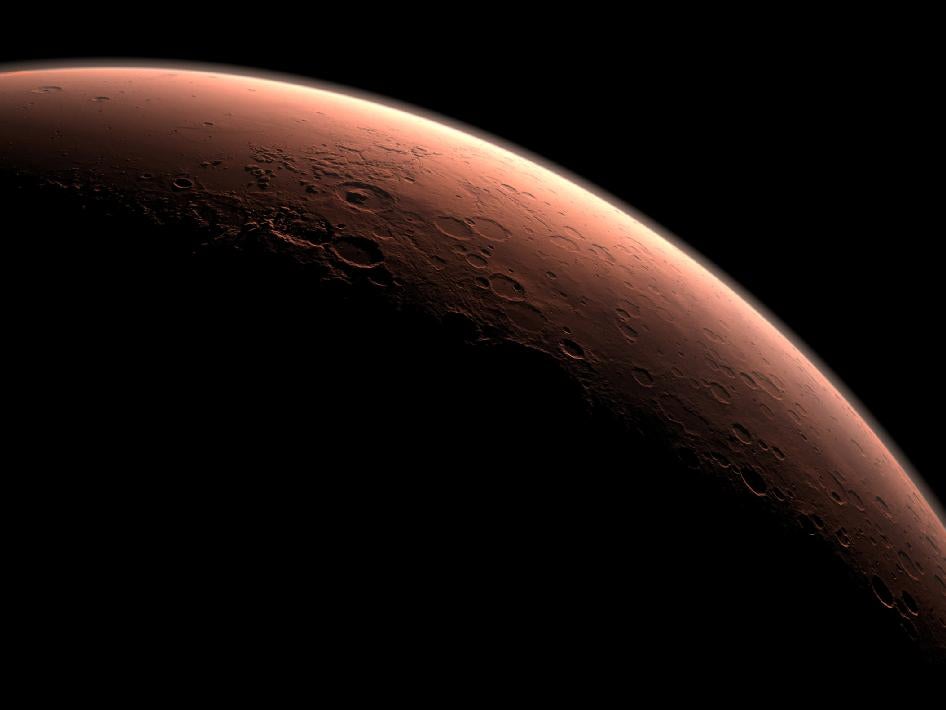 The sun rises over Gale Crater on Mars, the future home of the newest Mars rover, Curiosity. Rover scientists will upload commands overnight — Mars time — so the rover can start its day bright and early.

When NASA’s new Mars rover lands on the Red Planet this summer, it’s safe to assume it’ll be some time in the morning or early afternoon at the Jet Propulsion Laboratory in California, home of the rover science and engineering teams. So that means it’ll be mid-afternoon on the East Coast, evening in Europe, and so on —- pretty easy to figure out the time zones. But what time will it be on Mars? What time zone will Curiosity live in — and how can you even tell?

Timekeeping on Mars is a bit like telling time on Earth, because the planets are similar in lots of ways. But there are just enough differences to drive a person slightly crazy.

To start with, the Martian day, or sol, is 39 minutes and 35 seconds longer than a day on Earth. This isn’t a lot, but it adds up quickly when you’re living on Mars time — as the Curiosity team will. And a Martian year lasts 668.59 sols, about 1.88 times an Earth year. Seasons last much longer and are much more extreme, thanks in part to Mars’ deeply eccentric orbit.

“It feels like you are perpetually flying east 40 minutes every day,” said Deborah Bass, a scientist at JPL who worked on the Spirit and Opportunity rovers and the Phoenix lander. “You’re always jet-lagged. It’s only a little bit, because an hour —- who cares, that’s not so bad. But it starts to take its toll.”

Just as we mark our lives according to the passage of time, so too do space missions. Most Mars missions have been solar-powered, meaning the spacecraft must do its work during daylight hours. Curiosity has a nuclear generator, but it will still be a solar craft in many ways —- its cameras and other instruments need sunlight to see, and atmospheric phenomena, like the huge temperature shift between day and night on Mars, follows the movement of the sun. So engineers need a reliable method to keep track of time on the planet. Michael Allison, an emeritus professor at the Goddard Institute for Space Studies, has made a hobby of figuring it out. “I actually know Mars time, in a way, better than Earth time,” he jokes.

First, he says, you determine local noon, the point when the sun crosses the meridian overhead. That’s called Local True Solar Time. But Mars (and Earth) have eccentric orbits, moving closer and farther from the sun throughout the year, so local noon can be off by a few minutes as the elevation of the sun in the sky changes. To be really accurate, then, astronomers use something called a “fictitious mean sun,” which would move according to the mean position of the sun. This positioning — given by a chart called an analemma — gives you Local Mean Solar Time. That’s what astronomers use to tell time on Mars.

So now you can figure out your local noon. You can also figure out local time relative to the mean solar time at a specific point, a prime meridian. On Earth, this used to be called Greenwich Mean Time, and now it’s Coordinated Universal Time. U.S. Eastern time is UTC-5 hours, and so on. On Mars, it’s called MTC.

The Martian prime meridian, as it happens, was chosen before Earth’s was, Allison said. Astronomers picked it in 1840 so they could chart their observations, settling on a dark area that became known as Sinus Meridiani, or Meridian Bay. (The rover Opportunity landed in the western portion of this area, by the way.) Airy-0, a crater in this region, marks the true prime meridian. Astronomers chose it based on Mariner photographs in the 1960s. Airy is for the British astronomer George Airy, who built the Greenwich telescope that was eventually chosen for Earth’s prime meridian, in 1884.

Just as an aside, while we’re talking about organization of time, you can forget about Mars months or a Gregorian calendar. The Martian moons, Phobos and Deimos, careen around their planet so quickly that there’s no point dividing up the calendar according to their phases. Instead, scientists mark the calendar using the longitude of the sun. The year begins when the sun stands directly above the Martian equator, moving north as viewed from Mars —- the start of spring. Northern winter starts when the sun is at 90 degrees, and so on.

Allison has tackled this, too, creating a Mars calendar with 10 extra months. He wanted Mars months to follow Earth months in terms of things like equinoxes, so he stuck in extra months here and there. “I have January, February, Bradbury, Clarke and March,” he said with a laugh. “You couldn’t construct a practical reference to the orbits of the Mars moons for a convenient seasonal division. But if people go to Mars, they may have need for some monthly reckoning. That is a convenient organization of time for us.”

Allison has spent most of his career in the outer solar system, as a project scientist on Cassini, Juno and other missions. Before he got involved in Mars time, astronomers would sit down and calculate analemmas and Mars time scales, based on the position of the planet, for a few years before and after the mission’s planned lifetime. Allison decided to make a general Mars time calculator, calculating the planet’s position for 126 Mars years.

This is a watch face designed by a specialty watchmaker in Montrose, Calif., who built them for Mars rover drivers.

“I thought it would be fun to define this in a more general way and be done once and for all,” he said. He built an analemma tracking the average movement of the sun across the Martian sky. It looks like a teardrop. Allison plotted a Mars fictitious mean sun, and created a definition of Mean Solar Time based on this calculation. This required some high-level math, because Mars’ orbit gets knocked around by Jupiter and other factors, but Allison says it was a fun summer project. NASA still uses his algorithm.

You can, too, by visiting the Goddard Institute’s website and downloading a Mars clock that Allison’s colleague, Rob Schmunk, built. Mars24 gives you a nice image of Mars and the locations of Spirit, Opportunity, Phoenix, Viking and other missions. When Curiosity lands, it’ll get its own icon.

If you download Mars24, you’ll notice there are no time zones. Each lander uses an estimate of local mean solar time as its frame of reference, just like cities did before standard time was created in 1884. But each lander has its own de facto time zone. Spirit and Opportunity live 12 hours apart, for instance.

At JPL, clocks on the walls keep track of these Mars times, Bass said. When a rover does something, it is cataloged as local rover time and JPL time. When the Spirit and Opportunity mission started, NASA even ordered custom Mars watches, and some team members had Mars alarm clocks.

“We have universal time, and then there is a spacecraft clock time. Then there is the local mean solar time, which is Mars time. Then we have Pacific standard time, Eastern standard time — the conversions between time systems is pretty amazing,” Bass said. “Mars time is simply another time zone, in that respect.”