Space Boat: A Nautical Mission to an Alien Sea

In 2006, while flying by Saturn’s moon Titan, the radar on NASA’s Cassini orbiter discovered seas of liquid ethane and... 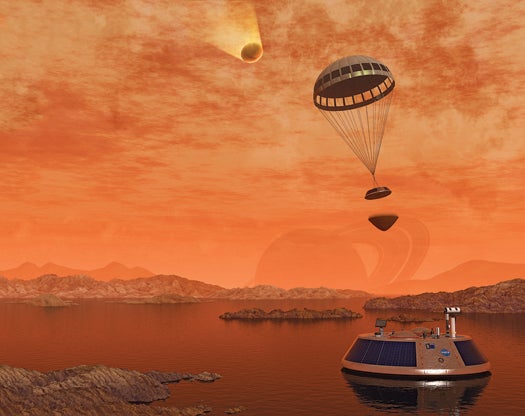 This capsule designed to explore Titan's seas is one of three projects being considered to receive NASA funding next year. Graham Murdoch
SHARE

In 2006, while flying by Saturn’s moon Titan, the radar on NASA’s Cassini orbiter discovered seas of liquid ethane and methane on the moon’s –300ºF surface, the only bodies of liquid we know of that exist anywhere but on Earth. Some of the oily seas appeared on Cassini’s radar to be larger than Lake Superior, but visibility was poor because Titan’s atmosphere is thick and hazy. Now NASA is considering sending a probe called the Titan Mare Explorer (TiME) to splash down on one of Titan’s seas for a closer look. The mission would be humankind’s first extraterrestrial nautical expedition.

In May, the TiME project received a $3-million development contract from NASA. If the space agency green-lights the mission, the capsule will lift off in 2016. By 2023, TiME will be about 800 million miles away in Titan’s north-polar region, home to its biggest lakes and seas. The capsule will take photographs, collect meteorological data, measure depth, and analyze samples. TiME will have no means of propulsion once it is on Titan, so it will float, carried by breezes across the sea’s surface. Then, by the mid-2020s, it will enter a decade-long winter of darkness as the moon’s orbit takes it to the dark side of Saturn, away from the sun and communication. It won’t have a line of sight to Earth to beam back more data until 2035.

Methane clouds drift in Titan’s smoggy orange skies, sometimes releasing hydrocarbon raindrops, which replenish the seas and sculpt the landscape the way water does on Earth. But Titan’s seas probably don’t contain life. “Life as we know it requires liquid water, and Titan’s surface is far too cold for this,” says Ralph Lorenz, a physicist at Johns Hopkins University who is working on TiME. “Its seas can tell us about how molecules organize and evolve, and how life may arise more generally.” TiME’s principal investigator, planetary geologist Ellen Stofan, wonders about the waves: “Are there hazes, sea spray? Is the liquid clear or cloudy? Is there scum floating on the surface? With Titan’s seas, there are endless questions.”

After a seven-year journey, including gravitational slingshots around Earth and Jupiter, the Titan Mare Explorer (TiME) passes through Titan’s thick nitrogen and methane atmosphere, protected by its heat shield.

At an altitude of about 100 miles, TiME deploys its parachute. During the remainder of its roughly two-hour descent, the probe’s camera snaps pictures while a thermometer and barometer record meteorological data.

After landing in the ethane and methane sea Ligeia Mare, TiME’s mass spectrometer collects a sample to analyze its chemical composition, while its sonar measures the sea’s depth. Without its own means of propulsion, the capsule will bob along in the gentle wind and currents. It might even experience alien rains or wash up on an extraterrestrial beach.

Next year, NASA will give full funding to one of three missions: a Mars probe to study how the planet formed, a “comet hopper” that will repeatedly land on a near-Earth comet, or a capsule to float on a sea on Titan, one of Saturn’s 53 known moons. 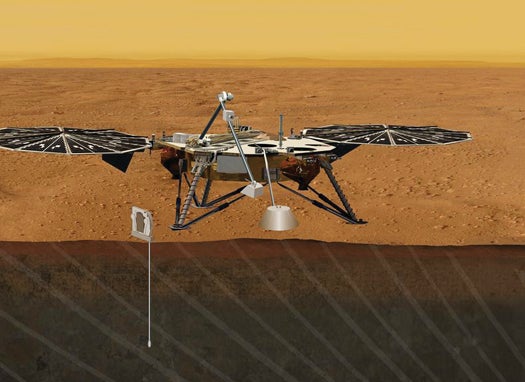 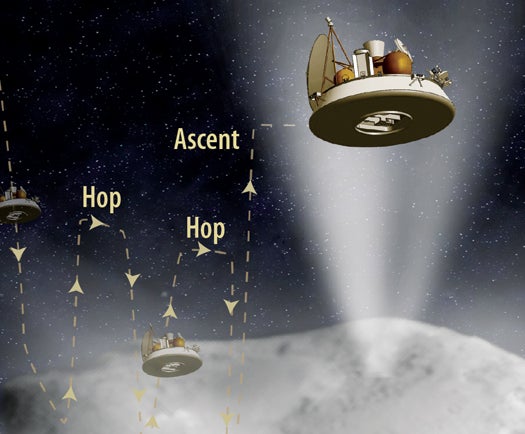 The Comet Hopper, conceived at NASA’s Goddard Space Flight Center, would land several times on a comet, studying how the icy body evolves as it warms up while approaching the sun.