In April, Kathie Thomas-Keprta told a standing-room-only audience at the Astrobiology Science Conference that she had found evidence of life... 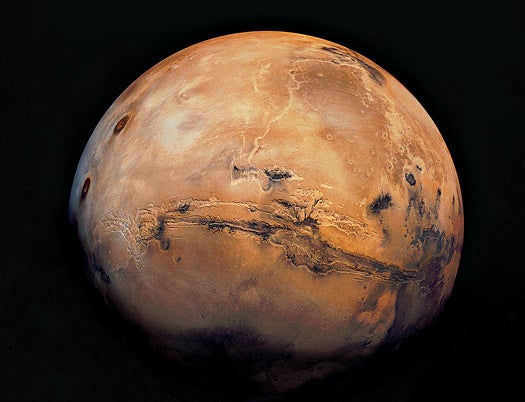 In April, Kathie Thomas-Keprta told a standing-room-only audience at the Astrobiology Science Conference that she had found evidence of life on a three-billion-year-old Martian meteorite. And no one was surprised. That’s because she and eight other researchers at several universities and NASA’s Johnson Space Center had reported the same thing about the same meteorite in 1996. They were met with criticism and ridicule back then. But this time, the reaction was more favorable.

The five-pound rock in question was discovered in 1984 in the Transantarctic Mountains and is known as the Allan Hills Meteorite, or ALH84001 in astrobiology circles. Many scientists considered the gray-green meteorite a dead end, but the NASA team never stopped studying it and, thanks to improved microscopy techniques, the case for life on Mars is stronger than ever. “You can almost feel the tide turning,” Thomas-Keprta says. “People are looking at our research again.”

The first time around, critics argued that the markings that resembled Earthly bacteria were too small to have been alive (bacteria of the same size have since been found here) and that the organic material in the rock formed in Antarctica. But the killing blow came in 2003. Thomas-Keprta’s group had asserted that magnetite crystals, structures that Earthly microorganisms make, were formed in the meteorite by Martian bacteria. In 2003, however, researchers ran computer models that indicated that geological processes occurring at temperatures too hot to sustain life could have created these magnetites.

Now science is again considering the possibility that ALH84001 is full of fossilized nano-ETs. In Thomas-Keprta’s new magnetite study, she used a focused ion beam to isolate a fraction of the magnetite. When she analyzed the sample’s chemical composition, she found that the magnetites were similar to those created by Earth microbes, and that their specific atomic makeup could not have formed at the high temperatures suggested by critics. “This doesn’t definitively show that the magnetites in ALH84001 are biological in origin,” says Dennis Bazylinski, a bacteriologist at the University of Nevada who refereed Thomas-Keprta’s paper. “But it does show that the thermal mechanism popular among those who think strongly that the magnetites do not have a biological origin is extremely unlikely. I think Kathie really put a nail in the coffin for that explanation.”

Convincing doubters that this means Mars was teeming with life, however, will be difficult. “ALH84001 is a really nice rock, full of lots of cool stuff about early Mars, but nothing in it points in the direction of life,” says David Blake, a NASA exobiologist who studied ALH84001 in the 1990s. “To look at a rock 140 million miles from where it formed and turn it into a whole world is tough.”

Recent studies by other groups of two other Martian meteorites, the Nakhla meteorite, found in Egypt, and Yamato 593, another Antarctic specimen, have yielded features similar to ALH84001. Later this summer, Thomas-Keprta will turn her ion beam on these rocks—which formed in a wet Martian environment ripe for microbes—in hopes of revealing whether it contains biological by-products, and possibly uncovering fossilized cell walls. 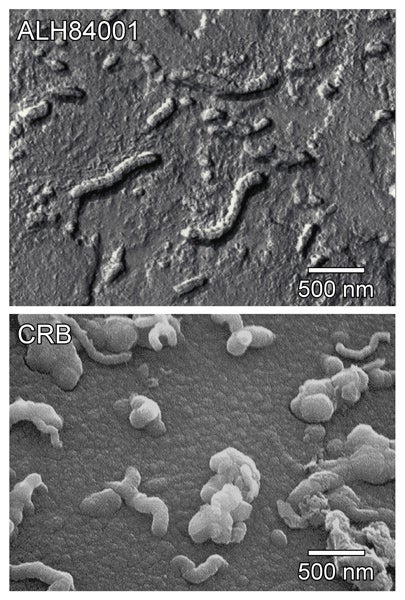 Even if ALH84001 really is the dead end some argue, the work has been worth it. Astrobiologists now know how incredibly difficult it is to discern biological agents from geological processes, saving researchers from a wicked learning curve when they someday get a bit of Mars itself on the table. In the next decade, the first sample return missions will bring back a pound of Martian soil, and unless it’s full of living microbes or space maggots, scientists will inspect it with the same methods developed for these meteorites. In the meantime, there are more than 200 pounds of Martian material on Earth. That’s a lot of rocks to practice on.