Why Scientists Want To Throw Lawn Darts At Mars

Experts from NASA say it’s time to stop beating around the bush when it comes to looking for life on Mars—and they’ve started an Indiegogo campaign to do something about it. 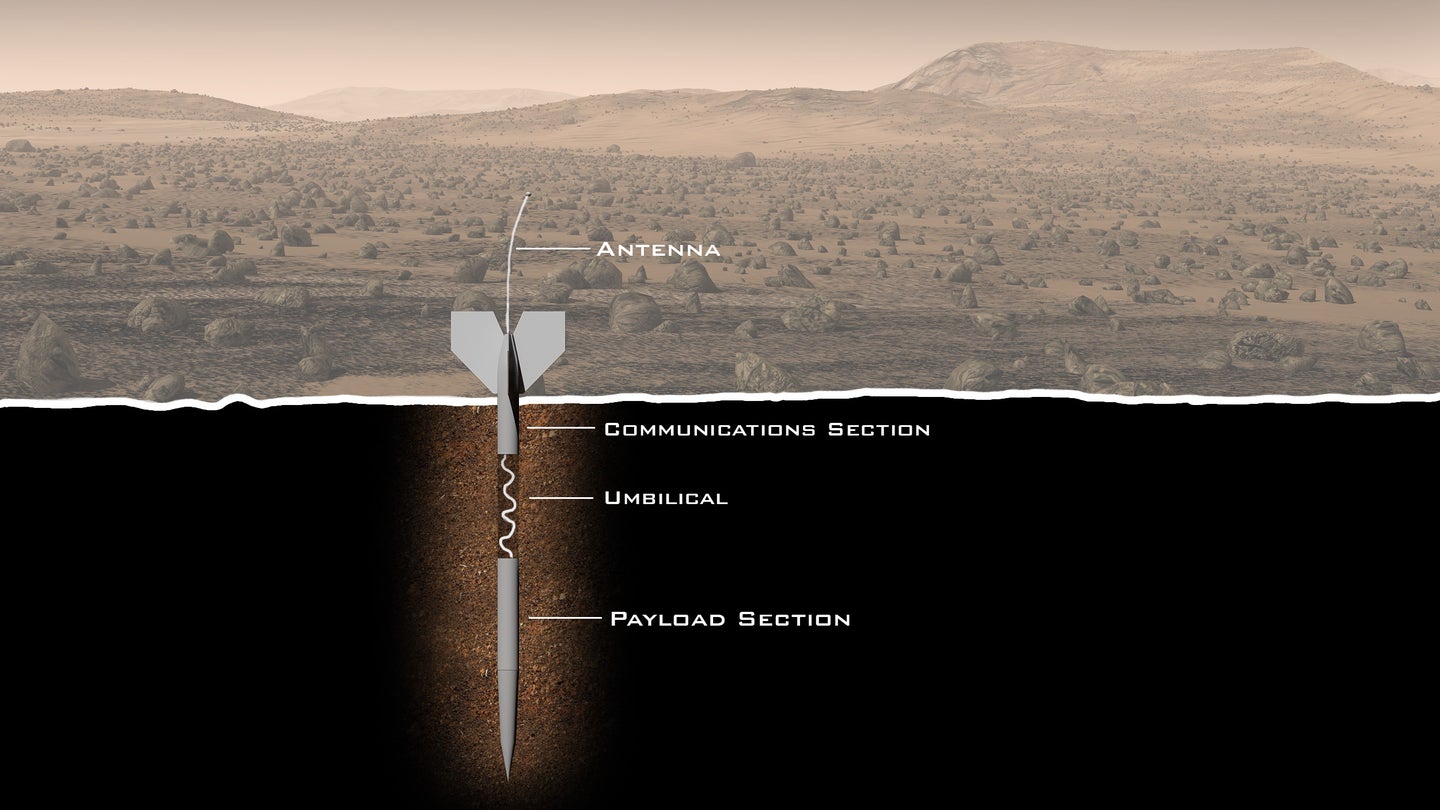 "Arrows" fall from a spacecraft, penetrate the ground, and expose the life-detecting equipment inside. Explore Mars Inc.
SHARE

Mars almost definitely has water below its surface, and it’s possible that it might have life there too — buried deep in the soil, where it’s protected from dryness, radiation and temperature extremes. Unfortunately, NASA doesn’t seem too interested in looking for it, preferring to look for “conditions” that might support life instead. But a group of aerospace and robotics engineers — many of whom work for NASA, and one of whom even operates the Curiosity rover — think NASA should be going with a more direct approach, and they’re taking matters into their own hands.

Part of the challenge of looking for life on Mars has been in designing the right equipment to dig for it. Curiosity was the first robot to drill into Martian soil. That was in 2013, and the hole was two inches deep. To search for life, robots have to dig a lot deeper than that. But scientists are struggling to come up with a design small enough to fit onto a rover yet robust enough to survive being pelleted with dust and radiation.

So, rather than sending giant drills to Mars, the scientists behind the ExoLance Indiegogo campaign are suggesting we dig in with big lawn darts instead.

The concept is fairly simple by NASA standards. ExoLance could theoretically piggyback on another mission to Mars, and as the spacecraft enters the Martian atmosphere, a dart dispenser (named “Quiver”) separates from the ride. As it falls to the ground at supersonic speeds, it drops the “arrows,” which bury themselves 3 to 6 feet into the Martian soil.

As an arrow burrows, its nose separates from its back end to expose the life-detection equipment pack inside. This would be a metabolic test that can distinguish between living and non-living chemistry, the ExoLance team says. (Alternate strategies have proposed looking for DNA or ribosomal RNA.) Meanwhile, the hind end of the arrow stays above the surface, to communicate with an orbiter about the scientific findings.

Other scientists have come up with concepts similar to ExoLance. Last year one British team successfully fired darts at an 11-ton block of ice, at a speed of 760 miles an hour, to test whether the method was viable to hunt for life on icy moons like Europa and Enceladus.

Through crowdfunding, the ExoLance scientists are trying to raise $250,000 to build prototypes that they will then test by dropping them out of an airplane in the Mojave Desert. Phase II (which requires a lot more funding) will focus on developing the life-detection equipment.

“Once the concept is sufficiently tested and we have proven the viability of the mission concept, we will approach NASA, other space agencies, and potential commercial providers to carry ExoLance on one or more future Mars missions,” their website says.

The team has many challenges ahead of them, which they note on their campaign site. For one, the project will likely cost between $1 and $10 million overall. They’ll need to make sure the arrow penetrates to just the right depth; they’ll need a reliable power source; they’ll need to secure a chance to piggyback on another mission; and they’ll need to keep the payload as small and lightweight as possible to avoid extra costs.

The implications of looking for life on Mars are potentially huge. If we discover microorganisms there, it could rewrite biology, evolution, and history. It could also mean that life on Earth preceded life on Mars, or vice versa. Or, if we find nothing, at least it’ll be a clear answer.