Why doesn’t anyone live on the moon yet?

Solar storms, sharp sand, and near-weightlessness are just the tip of the iceberg. 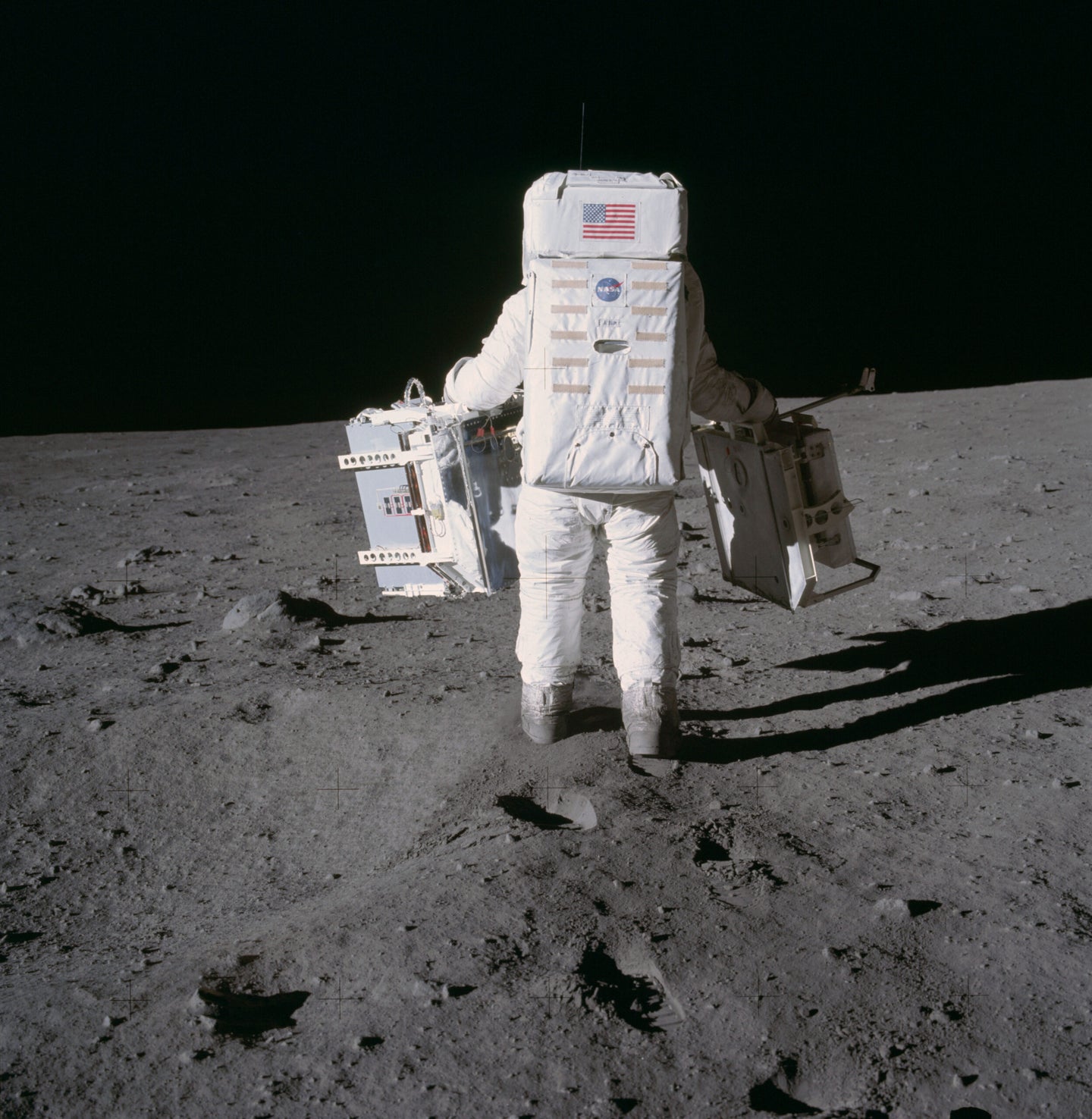 Is Earth’s fresh air, endless biodiversity, and (relatively) stable average temperature getting you down? Ever wanted to drop everything and jet off to a place where life is simpler—or better yet, nonexistent? Then take a 238,900-mile jaunt to the solar system’s premiere deserted destination: The moon. Our closest astronomical neighbor offers 14.6 million square miles of peace, quiet, and more shades of gray than you can count—perfect for a rustic getaway without all the distractions of nature.

Sound heavenly? Unfortunately, it’ll take a lot more than a simple rocket trip to achieve lunar paradise. And the first folks to set up shop on the moon probably won’t be building resorts and vacation homes—as of now, NASA wants to create what’s basically a gas station for future trips to Mars. Astronauts would stop on the moon to refuel and stock up on supplies before embarking on an 8-month odyssey to the red planet.

Whether it becomes a 5-star hotel among the stars or the first 7-Eleven outside Earth’s atmosphere, the tiny rock orbiting our planet is so desolate that we’ll have to establish basic infrastructure to sustain life if humans are ever to settle down there. It won’t be easy, but it’s far from science fiction.

“Humans are fragile, and because we’re so fragile, we require so much,” says astrophysicist and planetary scientist Laura Forczyk, who owns the space consulting firm Astralytical.

For starters, there’s the moon’s lack of a genuine atmosphere. Forczyk says it does have somewhat of a “pseudo-atmosphere” called an exosphere: a magnetically suspended mix of gases and particles stirred up from the lunar surface by solar wind. But the elements that make up breathable air float around the moon at infinitesimal concentrations compared to Earth. Taking a deep breath would be just as deadly on the moon as it would be in the vacuum of space.

Don’t break out into a passionate rendition of Jordin Sparks’ “No Air” just yet—thankfully, breathing could be the least of future lunar residents’ worries. Forczyk says we’ve gotten really good at recycling air on the International Space Station through the Environmental Control and Life Support System. Along with a few lunar greenhouses to foster oxygen-emitting plants, a similar system could purify air and send it back through a network of sealed, controlled habitation modules in a lunar settlement, keeping us breathing easy for years. However, we’d have to send loads of those life-giving gases to the moon at least once to get the cycle going, which would be expensive: Shipping just a pound of material (even air, which would have to be pressurized in tanks) to the moon would cost more than $1.3 million.

The moon’s dinky exosphere poses other serious problems. Because there’s no air, there’s no wind, which means no erosion. That’s made the dust particles on the lunar surface—called regolith—especially troublesome. Unlike granules of sand on Earth, which appear round when observed under a microscope, regolith particles are sharp; meteorites and solar wind have hammered them, and there’s no fluid around to wear down those fractured edges. Getting sand out of your clothes at the beach would be a walk in the park compared to fielding these ultra-clingy particles, and they could cause problems for machines and humans working on the lunar surface.

No atmosphere also means no protection against meteorites, which hurtle toward the moon at breakneck speeds, threatening to puncture spacesuits and permanent structures. So if future humans on the moon see a shooting star, they’ll have to run for cover instead of making a wish.

While a lunar colony thankfully wouldn’t have to account for hurricanes or other extreme atmospheric weather events, it’d have to shore up against an invisible—but highly hazardous—threat: solar storms. Unlike the Earth, the moon has no magnetic field to protect against highly charged electromagnetic particles emitted by the sun. During particularly intense solar flares, which eject bursts of high-energy light waves from beneath the sun’s surface, even the Earth can’t fully shield our electricity infrastructure from going haywire. Without that crucial magnetic field, a solar storm engulfing a lunar settlement could be potentially disastrous for human health and infrastructure. Thus, we’d have to use substances like water or polyethylene, which contain concentrations of hydrogen high enough to absorb the impact of these rogue space particles, to protect buildings on the moon from solar radiation.

Scientists have recently uncovered another lunar nuisance to be aware of: moonquakes. Seismometers left by Apollo astronauts have told us that, despite having no apparent plate tectonic system or subduction zones, the moon’s ground can shake up to a magnitude of around 5 on the Richter Scale. That’s not as intense as some earthquakes recorded here at home, and Sam Courville, a research assistant at the Planetary Science Institute who has studied planetary seismology, says they likely wouldn’t pose a major risk for lunar structures.

But Courville says a possible mechanism behind these quakes could have implications for our future buildings. Some moonquakes are believed to be caused by temperature stress, when intense freezing and warming periods lead to contraction and expansion of materials and, in some cases, the formation of faults. The moon has some of the most variable temperatures in the solar system, ranging from a balmy 260˚F during the day to a bone-chilling -280˚F at night. And because a single lunar day lasts 27 Earth days, a colony’s structures would have to withstand these extreme temperatures for weeks at a time before feeling relief.

There’s also the issue of gravity: the moon’s is only about 1/6th that of Earth’s. Given what we know about the effects of long-term weightlessness on astronauts, lunar residents would have to take precautions to keep healthy. Exposure to microgravity on the ISS has been shown to accelerate bone and muscle loss and create cardiovascular issues, because having to work against gravity is part of what keeps our bodies fit. That’s why astronauts on the ISS spend hours a day exercising to make up for its absence. While the moon’s lack of gravity isn’t quite as extreme, Courville says living long-term in any environment with reduced gravity could be detrimental to human health.

Because we’d be setting up shop in a venerable desert, a lunar colony would need to secure some kind of water source. An ECLSS-like system could recycle any water we bring with us, but it’s not 100-percent efficient and would result in the loss of some water over time. Forczyk says one option is scavenging for traces of hydrogen and oxygen bonded to regolith particles and fusing them together to make trusty molecules of H2O, but that process would require an immense amount of energy. Instead, we could establish a settlement near one of the lunar poles, which contain deposits of ice that never see the sun—and never melt. This would provide easier access to a water source to replenish the purification system.

Strangely enough, Courville and Forczyk say the biggest obstacle to living on the moon isn’t a solar death storm or evil sand—it’s the economic and political will to make it happen. As of now, NASA has no set plan to send humans back to the moon in any capacity, and other space programs don’t yet have the funding to carry out their own crewed missions.

“Technologically, NASA has the ability, motivation, and expertise to do this,” Forczyk says. “The question is: Are people here on Earth going to fund it so we can actually accomplish it?”

Fifty years ago, the Cold War space race was a big motivator for sending the Apollo astronauts to the moon. Today, it’s the possibility of using the moon as a jumping off point for Mars and other spots throughout the solar system. Courville says a permanent settlement on the moon could dramatically reduce the cost of launching rockets into deep space, mainly because the moon’s low gravity and lack of atmosphere make liftoff a lot easier.

Whether the moon becomes a crucial stop on the way to Mars, the most isolated research facility to date, or just an outlet mall, the challenges of setting up permanent shop there should make us grateful to live on a planet that gives us everything we need.