It was smelly up there. 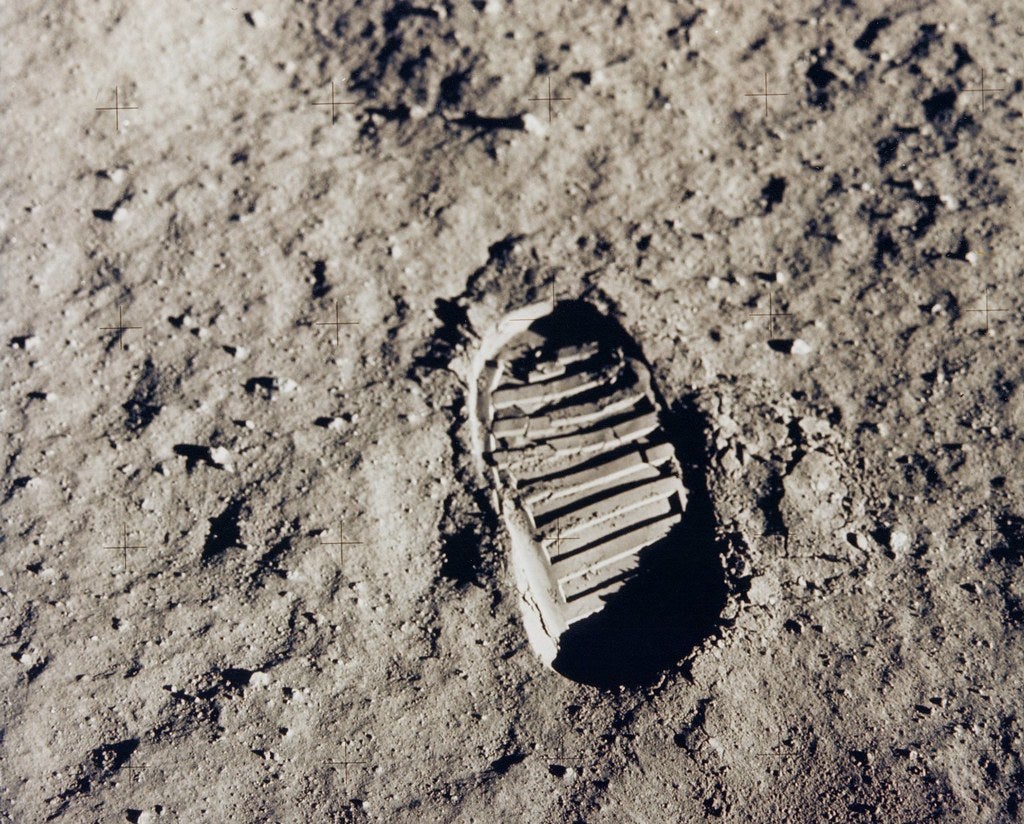 On July 20, 1969 our species took its first steps on an alien world. To celebrate the 50th anniversary of the Apollo 11 moon landing, here are a few facts you might not find in a history textbook.

If you like these weird facts, check out our hit podcast The Weirdest Thing I Learned This Week for loads more.

Buzz Aldrin did his moon walk while sloshing around in pee

“Buzz Aldrin often claims to be the first person to urinate on the moon,” Teasel Muir-Harmony, curator of the National Air and Space Museum’s Space History Department, tells PopSci. This is a frequent point of discussion in interviews about his role in the historic mission. But what many people don’t know is that the urination did not go according to plan.

“What’s unfortunate is that when he landed the lunar module, he landed so softly that the legs, which were designed to compress, didn’t,” Muir-Harmony explains. As a result, what was supposed to be a small step from the module to the surface was more of a giant leap. In the jolt of that surprising step down, Aldrin’s urine collection device broke. “So instead of going where it was supposed to, the liquid ended up collecting in one of his boots,” she says. “When he walked around the lunar surface he was kind of sloshing around.”

A historic moment for humankind indeed.

Astronauts could pretty much get Corvettes for free

A General Motors dealer offered some very-extra-cheap special lease terms to NASA fliers. It’s not clear whether all the Apollo 11 astronauts took advantage of this deal—but many of their colleagues did. This all started when astronaut Alan Shepard drove up to training in a ’57 Corvette, which prompted GM to gift him with a new car after he became the first American in space. NASA worried the association between astronauts and Corvettes appeared like an official endorsement, but the car had left the garage.

A lot of Apollo memorabilia has a very upsetting backstory

Ever heard of the Apollo insurance covers? Starting with Apollo 11, astronauts signed dozens or hundreds of autographs for the express purpose of supporting their families in the event of a disaster. Getting life insurance to cover your death on (or en route to) the moon came at astronomical costs—not even NASA’s insurance covered flight at the time—so crews found a way of creating their own insurance. The idea was that their loved ones could sell the memorabilia, which would become even more valuable if the astronauts died. Most of these have sold for around $5,000, but Armstrong’s—which his family held onto until quite recently—go for higher prices.

The practice once led to a scandal: In 1971, the crew of Apollo 15 decided to cash in on a deal from a stamp dealer and carry 400 unauthorized postal covers into space with them. Astronauts had brought memorabilia with them before, but in this case, the items weren’t properly approved as on-board personal items. The fact that each man accepted $7,000 for bringing them to space and back also angered NASA and the public. None of them ever flew in space again, and some of the postal covers were seized for a time.

The President was prepared for a catastrophe

President Nixon had a speech ready to go for the eventuality of Armstrong and Aldrin dying in the course of their mission. What’s especially creepy about this is that the text seems to elude to a scenario where the men have landed, but cannot get back to the orbiting Columbia vessel to get home. It’s hard to fathom how different our attitude toward space travel would be if NASA had listened to two men slowly run out of oxygen and die.

The moon has a smell

Many astronauts describe the odor of moon dust—which they’ve sniffed after tracking it back inside their landers on boots and suits—as smelling like spent gunpowder. Samples returned to Earth don’t seem to retain this odor.

Apollo 17 astronaut Jack Schmitt experienced what NASA refers to as the first recorded case of extraterrestrial hay fever: after his first walk on the surface, he removed his helmet and immediately became quite congested. He seems to have developed a tolerance pretty quickly, with his second and third ventures outside the lander triggering much milder reactions.

The Columbia had a smell, too: wet dog and farts

Space missions sound majestic in the abstract, but you only have to imagine the reality of three adults living and working in an enclosed space for days to realize it wasn’t always magical. In his book Carrying the Fire: An Astronaut’s Journey, Apollo 11 crew member Michael Collins recalls the foul odor of their vessel: “The right side of the lower equipment bay, wherein are located old launch day urine bags, discarded washcloths, and worse, is now a place to be avoided. The drinking water is laced with hydrogen bubbles (a consequence of fuel-cell technology which demonstrates that H2 and O join imperfectly to form H2O). These bubbles produce gross flatulence in the lower bowel, resulting in a not-so-subtle and pervasive aroma which reminds me of a mixture of wet dog and marsh gas.” This is still an improvement over Apollo 10’s in-flight atmosphere, which included a mysterious floating turd (or possibly several).

Speaking of space farts, NASA once looked into whether or not they might pose a fire hazard during spaceflight.

NASA was reportedly embarrassed to realize they had hardly any photos of the first man to walk on the moon. That’s because Aldrin and Armstrong were sharing one camera, and Armstrong held onto it for most of their two-and-half hour tour. NASA also realized after the fact how difficult it was to tell astronauts apart when they were in their suits, which prompted the agency to add personalized armbands for future missions.

No, Apollo astronauts didn’t have to go through customs in Hawaii

Yes, Apollo astronauts did have to spend four days in a trailer

The Apollo 11 crew was surely desperate for some fresh air and room to roam upon escaping the smelly confines of the Columbia, but they weren’t quite in the clear. The men were popped right into protective suits upon exiting the craft, and shuttled over to a converted Airstream trailer called the Mobile Quarantine Facility (MQF). They stayed there for 88 hours to ensure they wouldn’t expose the world to any “space germs.”

Neil Armstrong’s first words on the moon are hotly contested

They’ve even been the subject of linguistic studies.

NASA didn’t make its mission flags to last on the barren and exposed lunar surface; that would have been a time-and-money consuming engineering feat. They were just regular nylon flags made to stand up with wire and last for the duration of the landing photo opp. But Apollo 11’s American flag might not have lasted even a day: Aldrin says he saw it fall over when he and Armstrong blasted off.

Even any flags that survived their initial missions are likely totally bleached due to the moon’s lack of protection from solar radiation. They may even have disintegrated.

Pink Floyd provided a live, improvised soundtrack to the landing for the BBC

“We [Pink Floyd] were in a BBC TV studio jamming to the landing,” guitarist David Gilmour wrote in The Guardian in 2009. “It was a live broadcast, and there was a panel of scientists on one side of the studio, with us on the other. I was 23. The programming was a little looser in those days, and if a producer of a late-night programme felt like it, they would do something a bit off the wall.”

The resulting song is called Moonhead, and bootlegs of it are on YouTube. “It was fantastic to be thinking that we were in there making up a piece of music, while the astronauts were standing on the moon,” Gilmour wrote. “It doesn’t seem conceivable that that would happen on the BBC nowadays.”

If you liked these weird facts, check out our hit podcast The Weirdest Thing I Learned This Week for loads more.