There’s white gold in them hills. NASA wants to know how much 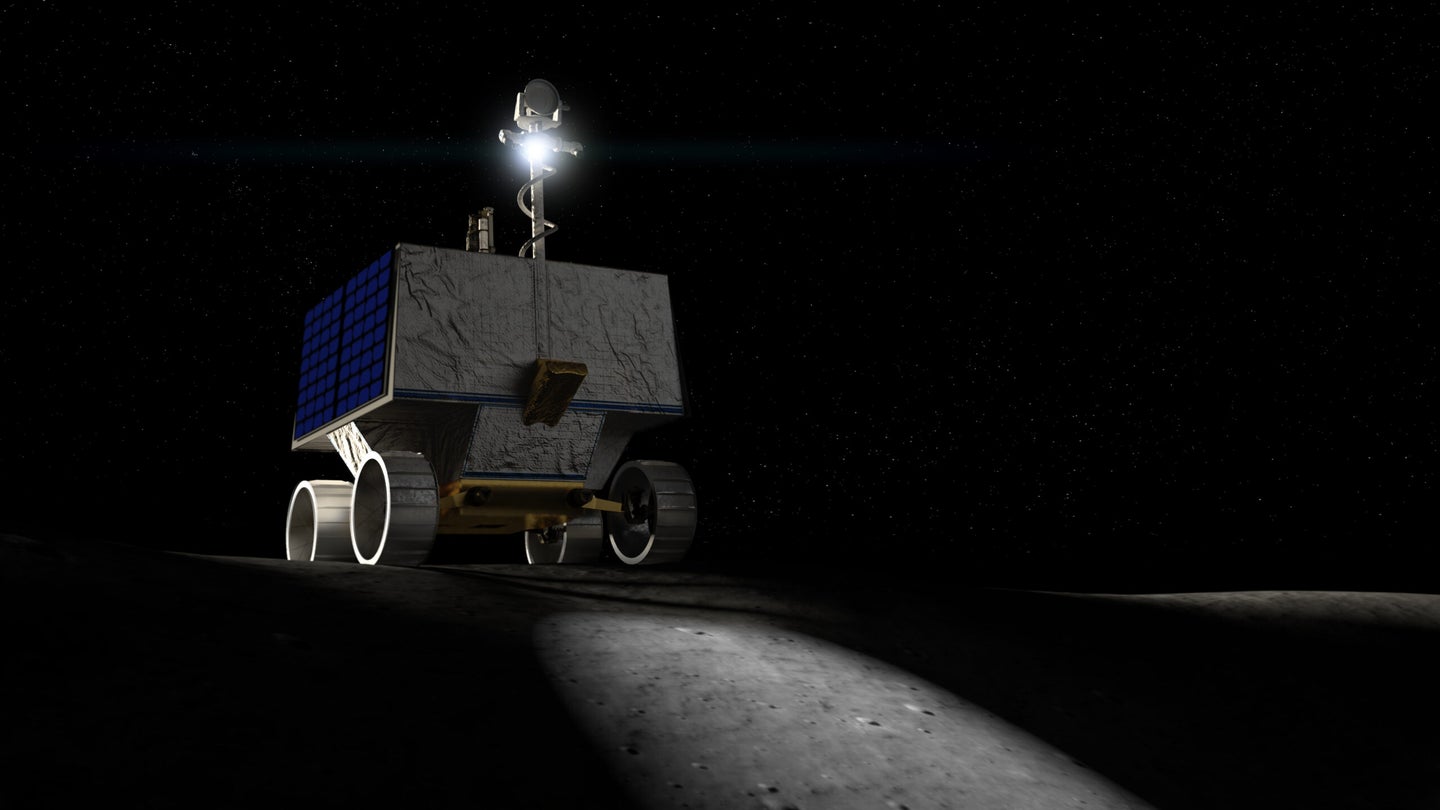 Water here on Earth is, for the most part, a common and renewable resource. When reservoirs run low, rains eventually fill them back up again. On the moon, however, H2O works more like oil or gold—accumulating slowly over eons and basically staying put.

Before any future missions can set up ice mines, we’ll have to know where the stuff is. To that end, NASA is planning to send a prospecting rover to the moon. If all goes well, the golf-cart sized Volatiles Investigating Polar Exploration Rover (VIPER) will spend the holiday season of 2022 trundling across the lunar south pole, drilling and sniffing the soil for signs of ice. The map it produces will be essential to both scientists trying to better understand where the moon’s water came from, and thirsty future astronauts.

“We’re really at the crossroads of where science and exploration come together,” says Anthony Colaprete, the VIPER project scientist.

Get your hands on enough moon water, and you’ve got a lot of what you need to run a lunar outpost. On top of drinking and bathing in the stuff, a properly applied electric current can split H2O into hydrogen for rocket fuel and oxygen for breathing. How much useful water we can practically wring from the moon, however, remains an open question. “Ultimately, we’re interested in whether or not this water represents a reserve in the way we think about oil reserves or natural gas reserves,” Colaprete says.

Rough estimates for water quantities at each lunar pole range from 100 million to 1 billion metric tons—more than enough for any number of Antarctica-style outposts. But for major space metropolises, humanity may have to look elsewhere. Transplant New York City to a lunar pole in January, for instance, and at one billion gallons per day it would suck the area permanently dry before the end of the year.

Researchers know that thin films of perhaps a few molecules cling to dust grains, but probably not in substantial quantities. More exciting are the results from the Lunar Crater Observation and Sensing Satellite (LCROSS), which NASA intentionally crashed into the Moon’s south pole in 2009. Amidst the dust it kicked up researchers detected signs of real grains of water ice. Colaprete, LCROSS’s principle investigator, likens the ice shards in the soil to bits of sugar mixed in with coffee grounds. This kind of water may actually be the most accessible to astronauts. Ice vaporizes directly upon contact with the vacuum of space, so collecting water could prove as simple as stirring up the dirt and catching the resulting vapor with a tarp.

Radar data also hints at a third type of water buried a few feet underground—big blocks of ice-dirt mixtures. These chunks of lunar permafrost could be more than 15 percent water by weight, but frigid temperatures would freeze them harder than concrete, making them more demanding to excavate.

To make a three-dimensional map of all of the above, VIPER will head to the south pole, where the sun sits low enough in the lunar sky to keep many areas permanently sheltered in ice-friendly shade. Rolling up and down the gentle slopes of billion-year-old craters, where water has presumably had the most time to accumulate, the rover will sniff out hydrogen molecules using three different types of spectrometers. Two will constantly scan the surface for water byproducts while the third peers underground. When it finds an especially damp spot, VIPER will deploy a three-foot drill to bring bits of buried dust to the surface for further analysis.

Together, the rover’s instruments will produce a modest regional resource map spanning perhaps a dozen miles showing what kind of ice is where. If VIPER happens to strike gold, this map could be of direct use to future astronauts. But it will also form the basis of what Colaprete calls a “resource model”—a scientific theory predicting where water should exist and why. He loves the south pole because it packs a lot of different environments into a small space to explore, giving VIPER the best chance of collecting enough data to develop a model that will be valid across the moon. Mineral exploration on Earth, he says, works in a similarly predictive fashion: “We’re working very closely with the United States Geological Survey to actually bring the processes and techniques that they use to the moon.”

The resource model would be a multi-purpose data set for both explorers and scientists. It would come in handy for anyone looking to place an ice mine, but would also contain information about different types of particles in the ices that could distinguish between water delivered by comet, for instance, and water formed through interactions involving the solar wind.

VIPER represents a big step toward humans establishing a lasting presence on the moon. Still, it also underscores how such a presence will depend on a substantial but finite resource that took billions of years to develop. Porting mineral surveying and extraction technologies to the moon may help us get into space, but only by fully harnessing sustainability practices will we be able to stay.