NASA has been understandably stingy with the last of its pristine samples. 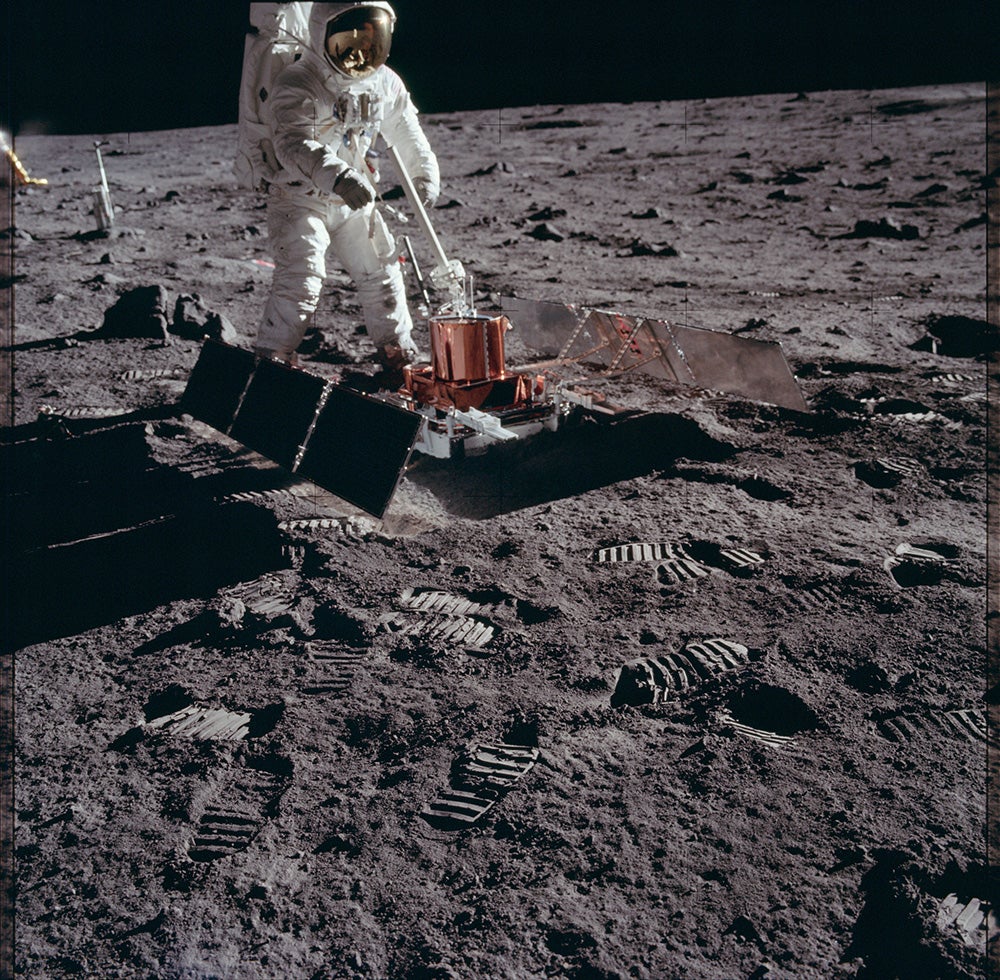 Through six different Apollo missions, astronauts brought back to Earth 842 pounds of rocks and soil from the moon. While much of this was made available for scientific research and analysis almost immediately, NASA sealed and stored a significant portion. Researchers hoped that future generations would be able to use more advanced technologies and leverage a better understanding of the geology and chemistry of Earth’s only natural satellite.

Those remnants of the Apollo are about to see daylight—figuratively speaking—for the first time in 50 years. On Monday, during a speech about the White House’s proposed 2020 budget, NASA Administrator Jim Bridenstine announced that the agency would release three samples of lunar rock to nine different U.S. research institutes, where they’ll undergo their first laboratory study and analysis. Those findings could give us a more robust picture of the lunar geology and how its evolved over billions of years, and perhaps even give us some insight into what we ought to be on the lookout for when we finally return to the moon in the next decade.

“When the previous generations did Apollo, they knew the technology they had in that day was not the technology we would have in this day,” Bridenstine told the audience at Kennedy Space Center in Florida. “So they made a determination that they would preserve samples…I’d like to thank, if it’s okay, the Apollo generation, for preserving these samples, so that our generation could have this opportunity.”

We only have a finite amount of lunar samples to give out for study here on Earth, and NASA has always been wary of being too generous. But the agency’s renewed push to return to the moon raises hopes we’ll soon have a lot more material to work with. “There are more lunar samples on the horizon, where we’re going to be able to learn more than we’ve ever learned about the moon before,” said Bridenstine.

The samples were all collected during the Apollo 15, 16, and 17 missions. None of them have ever been exposed to Earth’s atmosphere, but they’ve been preserved in very different ways. For example, one Apollo 17 sample, returned to Earth in 1972, is 1.8 pounds of a vacuum-sealed lunar core that contains a stratified layer of rock, and will be studied by six of the nine chosen research teams. Meanwhile, another team will have access to an Apollo 15 sample that’s been stored in helium since 1971. Some samples from the missions have been kept frozen since they were brought back to Earth, while others have remained sealed in room-temperature storage.

“I think this is an amazing time for NASA to have made these new samples available,” says Kate Burgess, a researcher with the U.S. Naval Research Laboratory, who will lead a team to study frozen samples as well as the helium-preserved samples to observe the effects of “space weathering”—the interaction of the space environment with an airless body like the moon. “There have been major advances in a lot of the techniques and instrumentation used in sample analysis in the past 10 or 15 years that have now matured enough to provide reliable and trustworthy data.”

The two biggest processes involved in space weathering are irradiation due to solar winds (which can cause hydrogen and helium to become trapped within the outermost surfaces of the moon), and the impacts of micrometeorites. These kinds of processes can dramatically affect the surface layers of the moon. “A better understanding of what causes certain specific types of alteration will lead to a better interpretation of the composition and history of surfaces we don’t have samples from, including other parts of the moon and many asteroids,” says Burgess.

This type of research requires the use of different microscopy and spectroscopy instruments that can characterize the structure and chemistry of the soils and really hone in on the physical changes induced by space weathering. High spatial resolution with those sorts of instruments has really only been available for the past 10 years or so. Moreover, says Burgess, the ability to measure hydrogen and helium trapped in nanoscale pockets in planetary materials— critical to this investigation—has only been possible for about five years. It was only last year that Burgess and her colleagues able to successfully report this kind of work on lunar samples.

Burgess isn’t the only one to emphasize how crucial today’s technology is to their investigation. Charles Shearer, a researcher from the University of New Mexico, is helming a study around vacuum-sealed Apollo 17 samples collected from a region of the moon that was cold enough for water to freeze. These “cold trap” samples are one-of-a-kind, and nothing like them has ever been studied by a laboratory team before. Shearer is hoping to use these examinations to reconstruct the cycle of volatiles (materials that are easily evaporated, like water) on the moon, and characterize new lunar rocks. Again, advances in microscopy and spectroscopy will be essential to making this work much more detailed than in decades past, and give the team an opportunity to age the rocks themselves.

“I’ve been an advocate for examining these samples for 10 years,” says Shearer. “During this time, I worked with NASA developing strategies for handling and curating these samples. To have all this planning come to fruition on Monday was incredibly rewarding. One should consider each of these lunar samples analogous to a new and very inexpensive sample return mission to the moon.”

We’re bound to get a better sense of the moon’s past from these projects, but they should also give us quite a bit to ruminate over as we plan our return. “How we explore the moon and carry out human activities on the moon may be partially dependent on the observations made on these samples,” says Shearer.

Burgess’s work, as she alludes, will be valuable in helping us understand how to navigate and interface with airless bodies like the moon and asteroids that are so directly exposed to space—places where many people want to mine and establish permanent outposts. Shearer and Kees Welten, a University of California Berkeley researcher leading a project on the effects of meteorite impacts on the moon, both believe this sort of work can help us improve sample collection techniques and materials for future research on the moon and other bodies in the solar system.

Other projects selected to study these samples will dig into understanding how organics are preserved on the moon, how water becomes locked into lunar minerals, and the formation of strange materials during the moon’s volcanic infancy. “Having this correspond with the 50th anniversary of Apollo 11 and the current international interest in the moon as well, as in other planetary sample return missions, like OSIRIS-REx and Hayabusa-2, makes this an even more exciting time,” Burgess says.