Saturn now has 82 known moons—so why did we only get one?

Scientists may have an explanation for the absurd abundance. 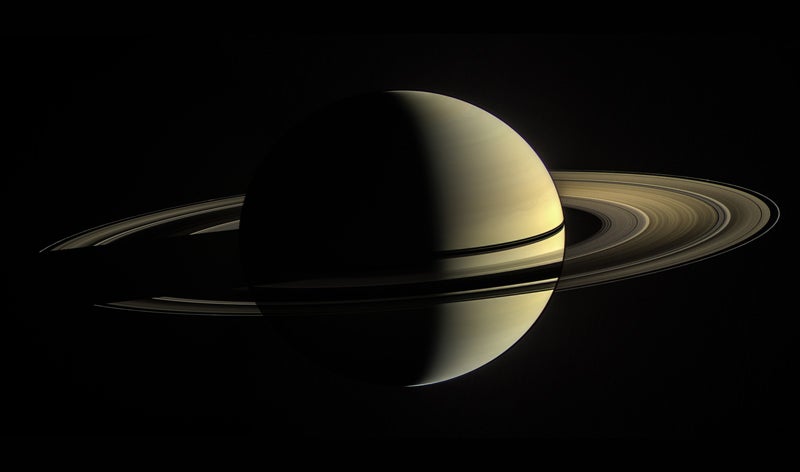 The four inner planets (Mercury, Venus, Earth, and Mars) host a measly three moons between them—the one you’ll probably see tonight, and then Phobos and Deimos of Mars. But stray past the asteroid belt and you’re into moon city, with at least a dozen icy rocks known to circle each of the outer giants.

The party’s just getting started: A trio of astronomers recently spotted 20 more, this time around Saturn. The new haul tips the balance of power in the outer reaches of the solar system ever so slightly toward the ringed planet, which now commands a three-moon lead over its banded neighbor. While the celestial scoreboard doesn’t really matter (although for the record, it currently reads Jupiter: 79, Saturn: 82, Uranus: 27, Neptune: 14), the rather close race backs up recent thinking about how the massive worlds managed to bag so many moons.

“The 20 new satellites fit into that pattern,” says David Jewitt, an astronomer at UCLA who helped observe the moons with the Subaru telescope on Hawaii’s Mauna Kea back in 2004. “They’re a reinforcement of what we thought before.”

The team, led by Scott Sheppard of the Carnegie Institution for Science, has spent years scouring the solar system’s darkest corners for unnoticed hunks of rock and ice, assisting the hunt for Planet Nine as well as pinpointing 10 previously undiscovered Jovian moons last year. Their research usually involves long nights searching the clear skies above Hawaii for unexplained points of light, but these new moons showed up on a hard drive instead.

“[Scott] was able to dig out about 20 more satellites from this old data that I had basically forgotten about,” Jewitt says.

The newcomers, which each measure around three miles across and sit many times farther from Saturn than its bigger and more famous moons, don’t so much orbit the planet as dance around it. At such great distances Saturn’s gravitational pull becomes weak, so Jupiter and even the sun draw the moons into loops and bends rather than simple, closed ovals. To confirm that the various specks of light spanning years of observations were tracing out these intricate paths around Saturn, Sheppard wrote computer programs to match up historical data with predictions from complex orbital mechanics.

The group found that most of the new moons join older ones in previously known families. A batch of 17 orbits backward against Saturn’s rotation, nearly doubling the size of a clan of satellites called the Norse group. Two turn with Saturn, but at a rakish 46-degree angle, putting them in the Inuit Group. The remaining moon appears to be doing its own thing. Astronomers expect that the two groups started out as larger moons that eventually fell apart into smaller pieces, which now follow similar orbits. Moon lovers interested in naming the new satellites can submit their favorite giants from Norse, Inuit, and Gallic mythology to the Carnegie Institution for consideration.

One characteristic all share is that they aren’t natives of the Saturnian system. Moons that swirled out of early solar system dust together with their hosts tend to have tidy circular orbits fitted tightly to their planet’s equator. These “regular” satellites include all three of the moons in the inner solar system, as well as celebrities from beyond the asteroid belt such as Europa (Jupiter), Enceladus (Saturn), and Titan (Saturn). Moons discovered in recent years, however, have all been “irregular”—ex-asteroids and comets trapped while passing by.

Saturn may top the moon leaderboard today, but its title likely depends on additional moons around outlying planets being too hard to see, according to Jewitt. Accounting for the distance handicap, the icy giants may make a strong showing. “What we found is that Jupiter, Saturn, Uranus, and Neptune have roughly the same number of irregular satellites,” he says, adding that 50 and 100 could be considered roughly the same number in an astronomical sense.

“When it comes down to the exact number of satellites, the truth is, who cares,” Jewitt says. “It doesn’t matter scientifically.”

What does matter is what those similar satellite counts can reveal about the forces and events that shape our solar system.

Slowing a speeding asteroid enough to catch and domesticate it isn’t easy, even for giants like Saturn and Neptune. For years astrophysicists speculated that the captures took place while the gas giants were young. Perhaps their early atmospheres were big and thick enough that friction would make incoming rocks nosedive into stable orbits. Another theory held that the giants sucked in their gas all at once, causing their gravitational influence to balloon in the astronomical blink of an eye and making it easy to snag any nearby bodies. But if the icy giants, which went through completely different childhoods, also managed to ensnare lots of irregular moons, then theorists needed a more universal theory of rock catching.

Jewitt and his colleagues favor a three-way tango. When two rocks fly by each other in the vicinity of Saturn, one might fall around the other in such a way that the first gets flung clear, leaving the other to slow down and get trapped. This so-called “three-body interaction” could explain the abundance of irregular satellites around all four of the outer giants, because it can take place anywhere.

Well, almost anywhere. Few satellites orbit the Earth and its brethren because their gravitational domains are a sliver of those of the outer planets. In addition to being comparative lightweights the inner planets are packed tightly together, so even if Earth did attempt to bring a friend home for Luna through a three-body interaction, a pass from Mars could send it flying. “The stable orbits basically don’t exist around the terrestrial planets,” Jewitt says.

The new cadre of satellites confirms that such captures are easy for Saturn, but if we ever wanted a new member in our Earth-moon family, we’d have to adopt.