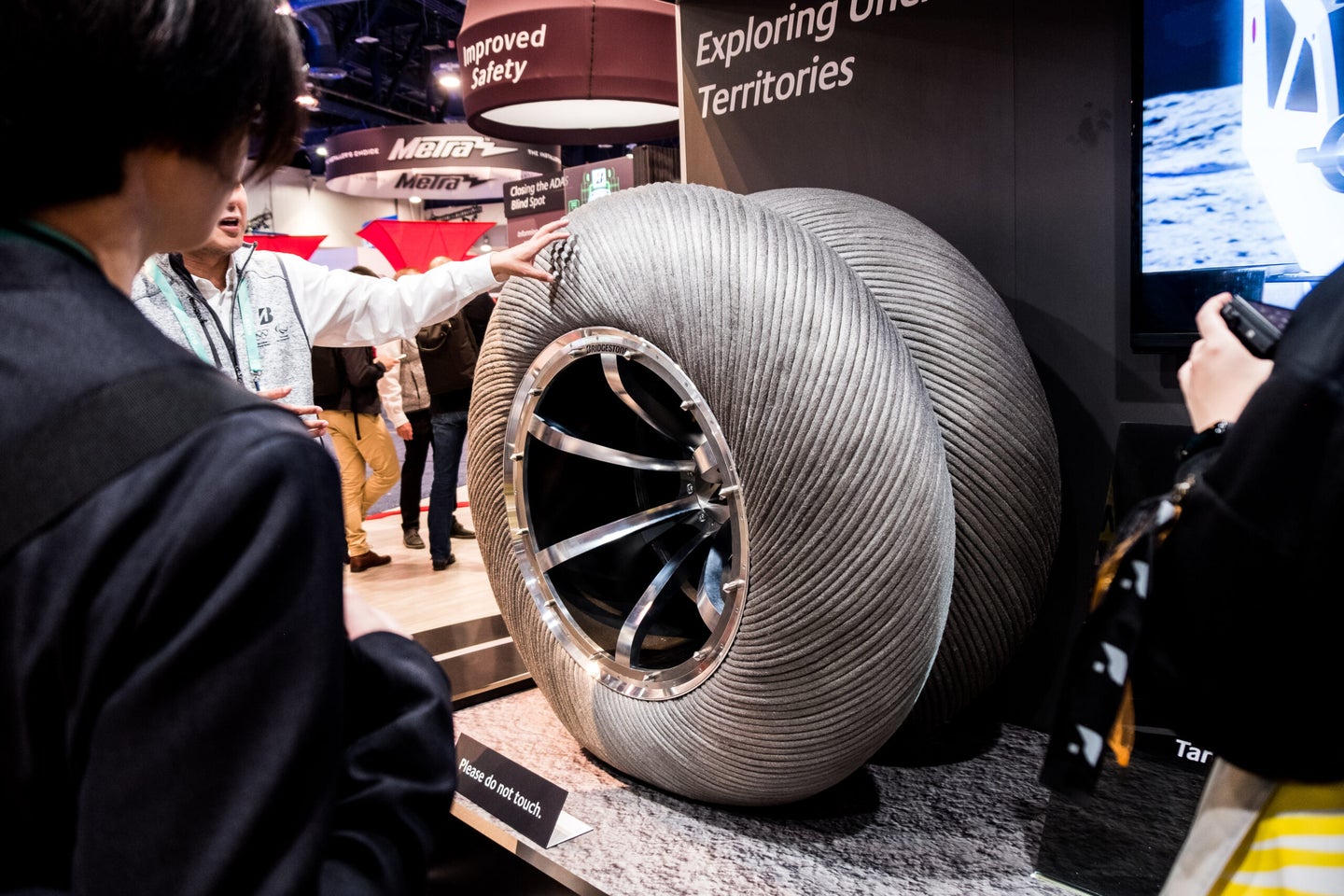 The concept tires use a split design to mimic a hoof that won't dig too deeply into the sand. Stan Horaczek
SHARE

When the Apollo 15 mission first brought a lunar rover to the surface of the moon in 1971, it allowed astronauts to cover more than 17 miles of terrain. That’s more than four times what previous missions covered on foot. The next year, the Apollo 17 mission earned the distance record with more than 22 miles of travel under its belt thanks to the rover.

But those are short distances compared to what might happen at this end of this decade. For its 2029 expedition, the Japanese Aerospace Exploration Agency (JAXA) plans to plunk an enclosed, pressurized rover that will hold two to four astronauts on the moon’s surface that will ultimately travel more than 6,000 miles if everything goes according to plan.

Toyota is working with JAXA to build the majority of its rover, but Bridgestone has signed on to build the tires on which the astronauts, their gear, and the bulk of the rover will move. A much heavier craft, and the vastly increased travel distance, create some unique challenges that will take years of engineering to sort out, but Bridgestone already has a prototype model, which it showed off in-person at this year’s Consumer Electronics Show.

The original lunar rover wheels employed a zinc-coated, piano-wire mesh shell to support the weight of the craft. Then the engineers riveted titanium treads in an arrow pattern to increase traction on the moon’s loose terrain.

For the much larger JAXA craft, Bridgestone is testing an outer shell made of a steel wool-like material that’s formed into thick ropes to form the treads. Each tire has the appearance of two tires placed right next to each other with the opposing treads forming a chevron pattern. “It’s biomimicry,” says Bridgestone America’s chief technology officer, Nizar Trigui, noting that they were inspired by a camel’s hoof. “The pattern helps the tire carry the load without penetrating too deeply into the sand.”

Underneath the woven surface, Bridgestone isn’t relying on the honeycomb-style pattern it has shown off for some of its commercial airless tires for trucks and cars. Instead, it uses a network of metal slats that flex like springs as the wheel moves along. “You don’t need a honeycomb structure because of the moon’s low gravity,” Trigui says. “Keeping the weight down is already a unique challenge.”

While the metal structure and skin isn’t exactly light, the moon isn’t the place to roll around on rubber tires. In addition to the massive temperature swings, the surface itself is hostile toward gear. “The particles are fine, electrocharged, abrasive, and sharp,” says Trigui. “The materials need to be robust to all of that.”

To make sure the tires will stand up to the abuse once they actually arrive on the moon, Jaxa, Toyota, and Bridgestone will test them in simulated moon conditions. The partners haven’t divulged which moon simulation provider they will use for the tests, but companies like Off Planet Research employ materials such as basaltic cinder, crushed glass, and to replicate more authentic moon conditions than you’d get simply driving across the sands in the desert.

With years to go before the launch, and lots of work still left to do on the rover as a whole, the design may change considerably from this concept before blast off. One thing that won’t change, however, is the moon’s status as one of the worst places you could think of to get a flat.