The proof is out there. 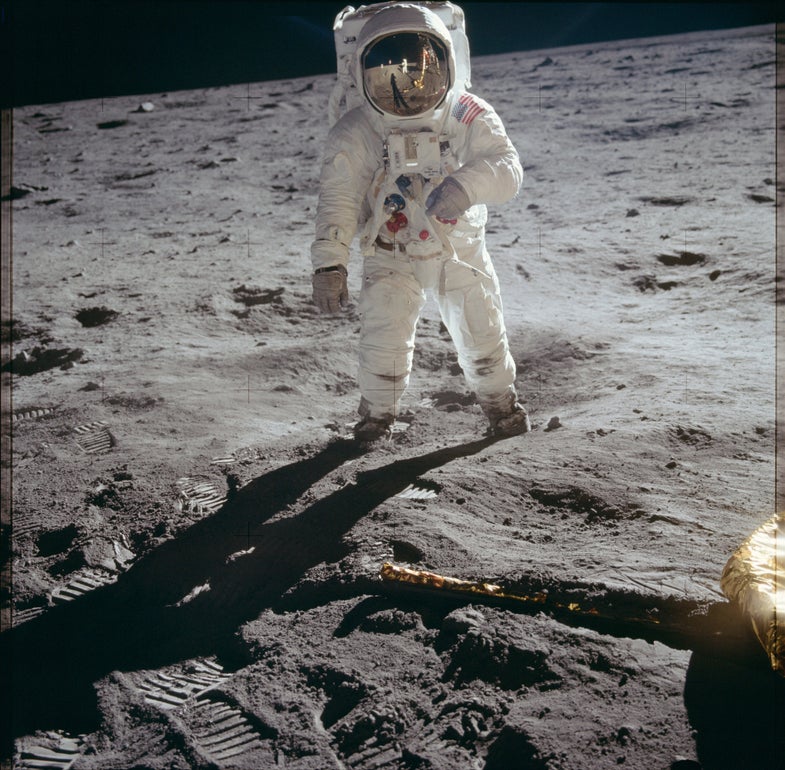 Boston Celtics point guard Kyrie Irving recently closed the book on his dalliance with promoting flat-Earthism (Earth is still round, by the way!) but perhaps he unwittingly started a new and unwelcome trend. On The Ringer’s “Winging It” podcast, Golden State Warriors star Steph Curry, apropos of nothing, seemingly came out as a moon landing truther, wantonly asking his fellow basketball players around 46:46 mark, “We ever been to the moon?” Asked if he really didn’t think humans landed on the moon, the two-time MVP doubled down and made his position clear.

It’s totally possible Curry and co. were just goofing off, but it sure doesn’t sound like he and the others were tongue-in-cheek. And if he was joking, the flames are already stoked—more people are bound to come out of the woodwork and say that they, too, believe the moon landings were faked. Anyone who’s ever spent time on the internet should know that these gentlemen are far from alone in questioning the veracity of human spaceflight.

But the evidence that we went to the moon exists, and it’s not all that complicated to understand. Here are 7 ways to prove humans have been to the moon and back.

We Have a Piece of the Moon Here to Study

Perhaps the most critical piece of evidence that tells us humans have been to the moon and back is the fact that we brought back samples of the moon to Earth, and they are very clearly unlike what we can find on our own planet. Throughout six different Apollo missions, NASA astronauts brought back about 842 pounds of moon rocks for scientists to study—the oldest of which are 4.5 billion years old, or 200 million years older than Earth’s oldest rocks. Analyses and experiments have definitely shown over and over that these aren’t geological materials you can just collect on the fly from Earth. They’re almost completely void of volatiles (chemical elements and compounds with low boiling points found in terrestrial crust and atmosphere, like nitrogen, carbon dioxide, water, etc.), as well as hydrated materials. These rocks simply do not exist on the modern-day Earth.

You Can See The Landing Sites for Yourself

Even today, you can still spot the landing sites for the Apollo missions on the surface of the moon. Images collected by NASA’s Lunar Reconnaissance Orbit (LRO) and published in 2011 sharply illustrate the touchdown points of the Apollo 12, 14, and 17 lunar landers as astronauts made their way to the ground, as well as the paths taken by those crews as they walked and rode around the surface of the moon. A year later, NASA went on to publish other LRO images of the old Apollo 11 site.

But wait, you say: what if the space agencies just faked those photos? Besides JAXA, plenty of other independent institutions outside of NASA, as well as amateur astronomers from around the world, have reported sightings of the remnants and signs of the past Apollo missions. If you have a pretty powerful telescope and a clear view of the full moon, you may have an opportunity to see the evidence of these missions yourself.

Moon landing conspiracy theorists love to pore over the photographic evidence collected during Apollo 11 and pinpoint parts of the photos that allegedly debunk the whole landing outright. One of these points is the fact that objects in the lunar module’s shadow are illuminated, which means there must have been multiple light sources during the filming, instead of just the sun as we were were told—right?

Not quite. Lunar dust—regolith—is a reflective material, and sunlight bounces off of it like it would a mirror, lighting up any surrounding objects nearby. (You can understand this dynamic in better detail by viewing what graphics card maker NVIDIA did in 2014, when demonstrating the power of their latest products by creating new renderings of the Apollo 11 photographs.)

Somewhat relatedly, the existence of unparallel shadows in these photos has also often been an argument that multiple stage lights were used to film the footage. This is also easy to debunk since you can easily recreate this with an uneven surface on Earth.

The Stars Are Still Around

Another argument in favor of a fake moon landing is that there are no stars depicted in photos of the event. If the moon has no atmosphere, we should be able to see an entire sky lit up by distant stars, right? But that ignores some basic technological constraints behind photographing things on the moon. In such a dark background with objects so brightly lit by the sun, the aperture of the camera needed to be kept small in order to photograph the lander and the astronauts clearly and sharply, and not as blurred objects from the Blair Witch Project or something. This invariably leaves the camera unable to pick up on any faint starlight in the background sky.

The same landscapes and scenes captured by the Apollo astronauts have also been captured in recent years by the robotic orbiters and rovers we’ve sent to the lunar surface. Japan’s SELENE (Kaguya) orbiter, for instance, has been able to snap up images that, when put together, illustrate the base of the Apennine Mountains also photographed during Apollo 15.

Perhaps one of the most talked about pieces of evidence to suggest the moon landing was faked has to do with the alleged movement of the flag. Footage of the U.S. flag moving after it was planted has always been cited as evidence that there’s wind blowing through the cloth—wind that can’t exist on the moon.

In truth, the flag is not flapping. It’s disturbed as it’s being planted, and those disturbances are causing ripples to move through the cloth—there’s no denying that. It’s not fluttering in the wind. NASA even has a gif that shows the flag still between two different images.

The flag is still up there—and looks like it’s in a gust of wind, thanks to wires placed inside to keep the cloth upright—and it’s been still for decades now.

The Retroreflectors Are Still There As Well

Laser ranging retroreflectors (LRRRs) are mirrors that were once used as targets for Earth-based lasers, as a part of NASA’s Lunar Laser Ranging Experiments conducted during the Apollo program. (Russia also had a retroreflector experiment program as well.) Basically, you fire a laser at those objects and measures the time it takes for the laser to hit the reflectors and bounce back. The results of the those experiments allowed us to learn that the moon is spiraling away from Earth at about 3.8 centimeters per year; 20 percent of the inner core of the moon is probably liquid; and flesh out some nuances about how gravitational forces work, among other things. The results of those experiments could only be made possible by the installation of those reflectors on the lunar surface.