The moon’s south pole is hiding something massive and mysterious 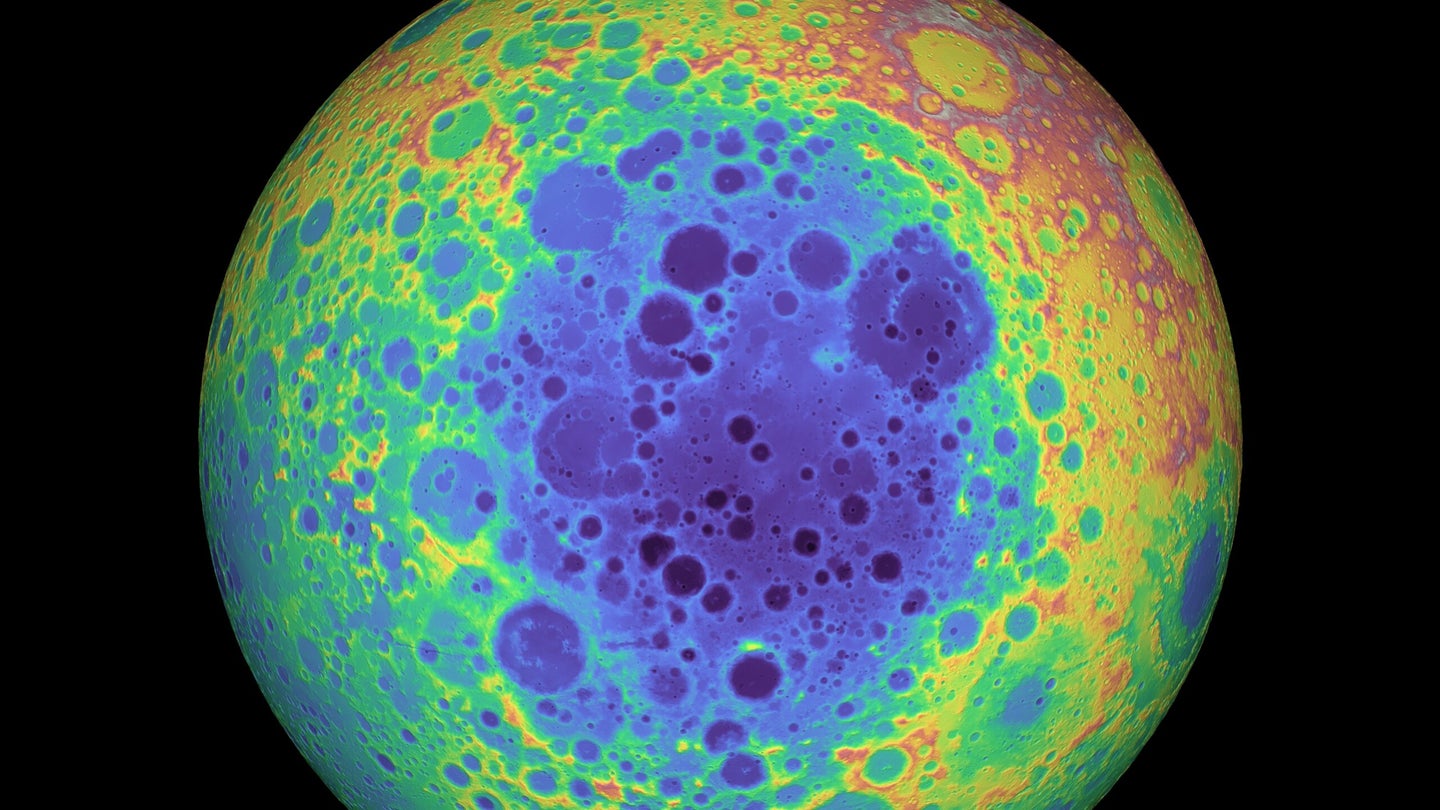 It’s been 50 years since Apollo 11, but our knowledge of the moon is still remarkably scant. We’ve only just scratched the surface of what there is to know, quite literally. A recent paper published in Geophysical Research Letters outlines the discovery of a massive—truly massive—body of material sitting hundreds of miles under the largest crater on the moon. And scientists are stumped as to what it is and how it got there.

“At first we didn’t really believe it,” says H. Jay Melosh, a geophysicist at Purdue University and a co-author of the new study. “Some other lunar basins have been known to have mass anomalies,” like the ones first discovered in 1968 by the lunar orbiter missions that preceded the Apollo program. “But the South Pole-Aitken Basin was never known to have a mass anomaly of that kind.”

The South Pole-Aitken Basin is home to the largest known crater in the solar system. Over 1,200 miles wide, several miles deep, and thought to be about 4 billion years old, it sits on the far side of the moon, which is why you’ve never spotted it during all your experiences moon gazing. The unknown mass sitting under the crater is thought to lie over 370 miles underground, and is roughly five times bigger than Hawaii’s Big Island.

Even though we can’t see it and have no actual way of studying what’s beneath the moon’s surface directly, we know its lurking there thanks to gravity. Planets and moons hurting through space don’t exert a uniform field of gravity. It fluctuates based on the distribution of mass throughout the body.

We can measure the moon’s gravity field by flying a satellite over the surface. Stronger pulls, caused by more mass, will cause the spacecraft to accelerate towards the surface. Conversely, as the satellite flies over regions with a lighter mass, it will bounce up in altitude. Compiling all that flight data together gives you a mapping of the moon’s gravitational field, and an indication of which parts contain more mass than others.

This is very easy to do for the near side of the moon that faces us, but historically it’s been impossible to communicate with anything that’s passing around the far side. NASA remedied that situation for its Gravity Recovery and Interior Laboratory mission, or GRAIL. They sent two lunar orbiters in 2011 and 2012, and spent a year collecting gravity field and geology data by measuring the change in distance between the two spacecraft as they orbited the moon. It was an incredibly high precision investigation for its time.

Several of the new study’s authors were part of the GRAIL team, and were interested in digging into gravitational anomalies measured during the study. A few were specifically studying data that indicated a gravitational anomaly was coming from the South Pole-Aitken Basin. When they combined those measurements with lunar topography data acquired by the Lunar Reconnaissance Orbiter, the team knew something bizarre lay deep under the surface.

Based on what was known at the time, the region was thought to be in isostasy, or a state of gravitational equilibrium. “We thought it was unlikely it could support any kind of gravity anomaly. And yet, the analyses kept showing this gravity excess.” The data also indicated it couldn’t be near the surface—it had to be deep underground—and was heavy enough to weigh the basin down by more than a half-mile.

One early theory suggested the anomaly was made of dense crystals, but there was no good way to explain how these crystals had actually formed. “None of us were particularly convinced by that,” says Melosh. “It’s really a kind of ad-hoc interpretation.”

The predominant explanation the researchers have rallied behind is that the mass is comprised of metal (probably iron-nickel) from the core of the projectile that impacted the moon long ago and actually created the crater in the first place. The researchers were a bit reluctant to go with that interpretation, since it seems a bit more fantastic to entertain, but Melosh thinks the theory has gotten stronger over time.

Overall, the discovery of this thing throws a wrench into our ongoing attempts to understand the moon’s geology in greater detail. There are some present-day models that suggest the moon’s interior is still warm enough to facilitate mantle convection, where that heat allows for the moon’s insides to move around. If we apply what we know about how this process works on Earth to the moon, then it would mean this anomalous mass should have sunk deep into and merged with the lunar core. Clearly it remains suspended, however, so scientists are now stuck trying to figure out whether those models are accurate or whether we have something else going on here.

“A dense anomaly like this should have sunk and joined the moon’s core,” says Melosh. The fact that it’s still there may be telling us that the moon is stiffer and colder than we once thought. Melosh suggests we made need to revise our models into something that accounts for a more solid moon, rather than a more molten one.

Rewriting and running these sorts of calculations, however, are quite intensive, and it’s not clear whether we might resolve this mystery any time soon. We’re unlikely to get a better gravity field assessment than what GRAIL accomplished, but “what we can do,” says Melosh, “is locate whatever this is seismically, and that would be yet another reason for the much-discussed yet never-implemented seismic network.” The proposal he’s referencing would establish new seismometers around the moon to collect data on any seismic activity. That data could be used to understand the moon’s interior in much better detail, including what the mass underneath the South Pole-Aitken Basin is made of. “We’d learn a lot more about the moon that way.”