But Blue Origin has a lot of work to do before its lander can touch down. 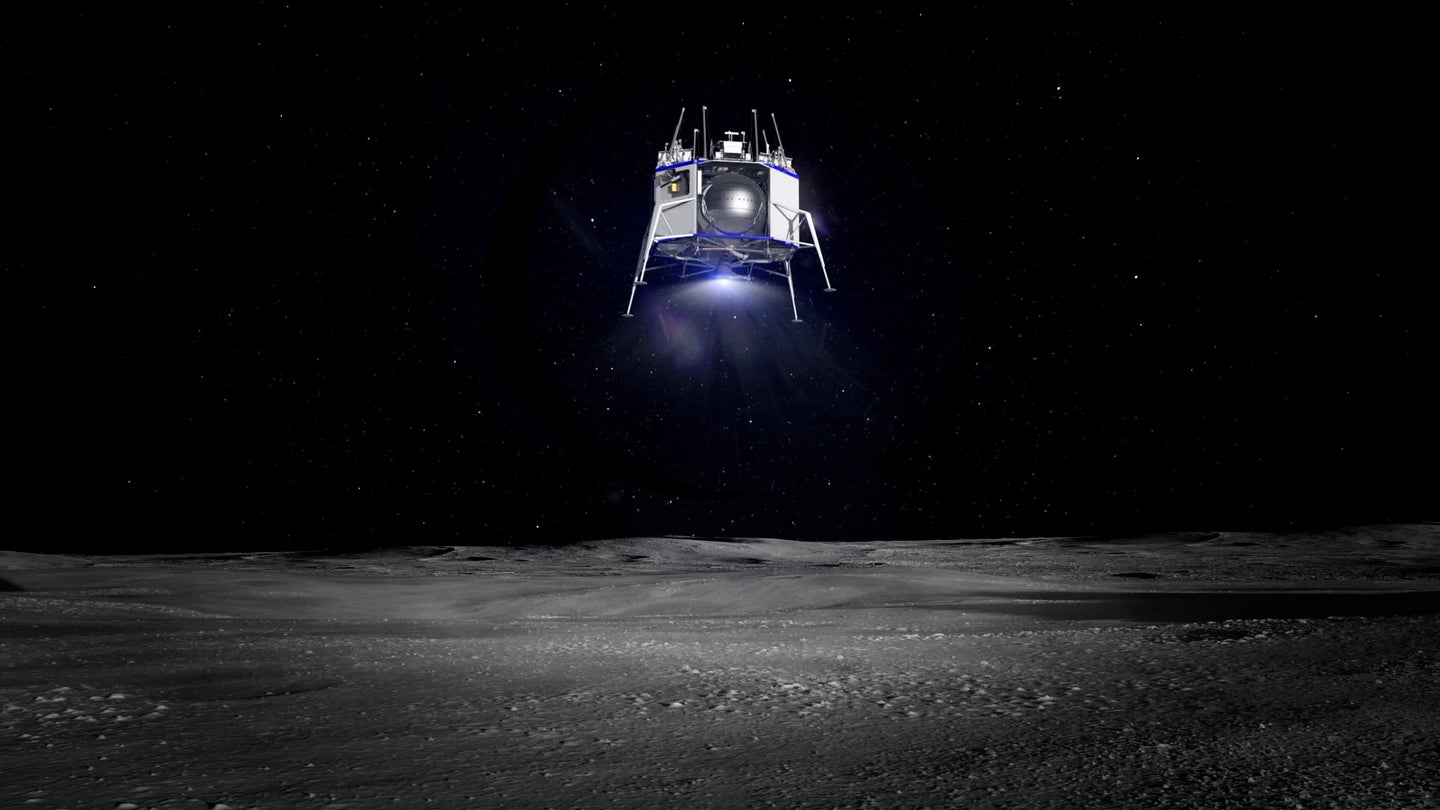 Blue Origin is shooting for the moon. At the Walter E. Washington Convention Center in Washington, D.C. on Thursday, Amazon billionaire and Blue Origin founder Jeff Bezos officially unveiled the company’s Blue Moon lunar lander—capable of taking 6.5 metric tons to the lunar surface. A larger version is designed to ferry humans to the moon as well.

“This vehicle is going to the moon.” Bezos told the event’s attendees, revealing a massive piece of spaceflight architecture. But whether the company can make good on those declarations in the next five years remains to be seen.

Bezos began with an extended intro on the increased energy needs for civilization here on Earth, describing those trends as “unsustainable,” something he’s previously espoused. “We will run out of energy on Earth,” he said. “This is just arithmetic. It’s going to happen.”

Rather than just investing more money in renewable forms of energy like solar or wind, or promoting smarter methods of power consumption, the richest man in the world thinks we can solve this dilemma by having people live and work in space. And he believes we should mine the moon’s resources to make it happen.

“We were given a gift—this nearby body called the moon,” said Bezos. He touted its water resources, and the potential to extract those materials out of the lunar south pole. That water ice could be used as a plentiful reservoir for sustaining a permanent lunar settlement, while also being split into hydrogen and oxygen to make rocket fuel.

There are also plenty of other potentially valuable resources to mine from the moon, like platinum-grade materials and helium-3, and the low lunar gravity makes it relatively easy to ferry those things back to Earth.

Blue Moon is certainly the heftiest lunar lander design to date. Besides an ability to take a large cargo or people to the surface, the lander can carry a rover on its ceiling, and also has an ascent module that can leave the lander and travel away from the surface. The spacecraft is also fitted with the company’s brand new BE-7 engine, which will have its first test fire this summer.

The announcement seems spurred in part by the Trump administration’s push to have NASA return humans to the moon in the same time frame Bezos has laid out. Vice President Mike Pence told the public in a speech in late March that the White House was directing NASA to accomplish this goal “by any means necessary.” The administration included an endorsement for using rockets and spaceflight architecture built by the private sector if NASA’s own technologies are unable to safely land on the moon by 2024.

Bezos explicitly referred to Pence’s speech, and told attendees he believed, after having started work on Blue Moon three years ago, the company could successfully land it on the moon by 2024. With timelines for both parties matching up, Blue Origin could potentially offer NASA the use of its lander to take humans to the moon.

Blue Origin is notorious for often staying mum about what it’s working on, but the company does have a history of talking about its lunar ambitions. Two years ago, Bezos first discussed Blue Moon with the The Washington Post (which he owns), saying the company was looking into setting up a cargo delivery system to the moon—an Amazon for a lunar outpost—as soon as 2020. And in that interview, Bezos said Blue Origin was looking into landing a vehicle near the 1,600-mile-long, eight-mile-deep Shackleton crater at the south pole of the moon. Some areas near the crater unusually receive a constant amount of sunlight (which could provide a reliable source of energy to solar powered systems), and scientists also believe a trove of water ice is located within the crater itself.

(The company alluded to the crater in a cryptic tweet posted in April that displayed a picture of the ship Ernest Shackleton used in his voyage to Antarctica.)

Last year, the company announced it was already coming up with concept designs for Blue Moon and a lunar lander capable of making touchdown on the surface, and other executives had previously suggested a Blue Moon landing could happen in 2023.

Blue Origin’s plans sound about as exciting and audacious as they come, but the company so far has made very little of the progress it needs to succeed. Blue Origin’s famed flagship launch vehicle right now is the New Shepard, which has been launched numerous times (including last week) and is a partly-reusable system but has only gone to suborbital space. The company aims to launch humans aboard New Shepard later this year. New Glenn, which should also be reusable, is still in development and won’t fly until 2021. Bezos did reveal that it will cost less than $1 million to refuel. By comparison, the much less-powerful Falcon 9 rocket built by SpaceX, which can haul up into space only a fraction of New Glenn should be able to do, costs about $300,000 to $400,000 to refuel.

Blue Origin is closer to getting to the moon than ever before, but it still has a long way to go.