He says Starship will be in orbit in a matter of months. 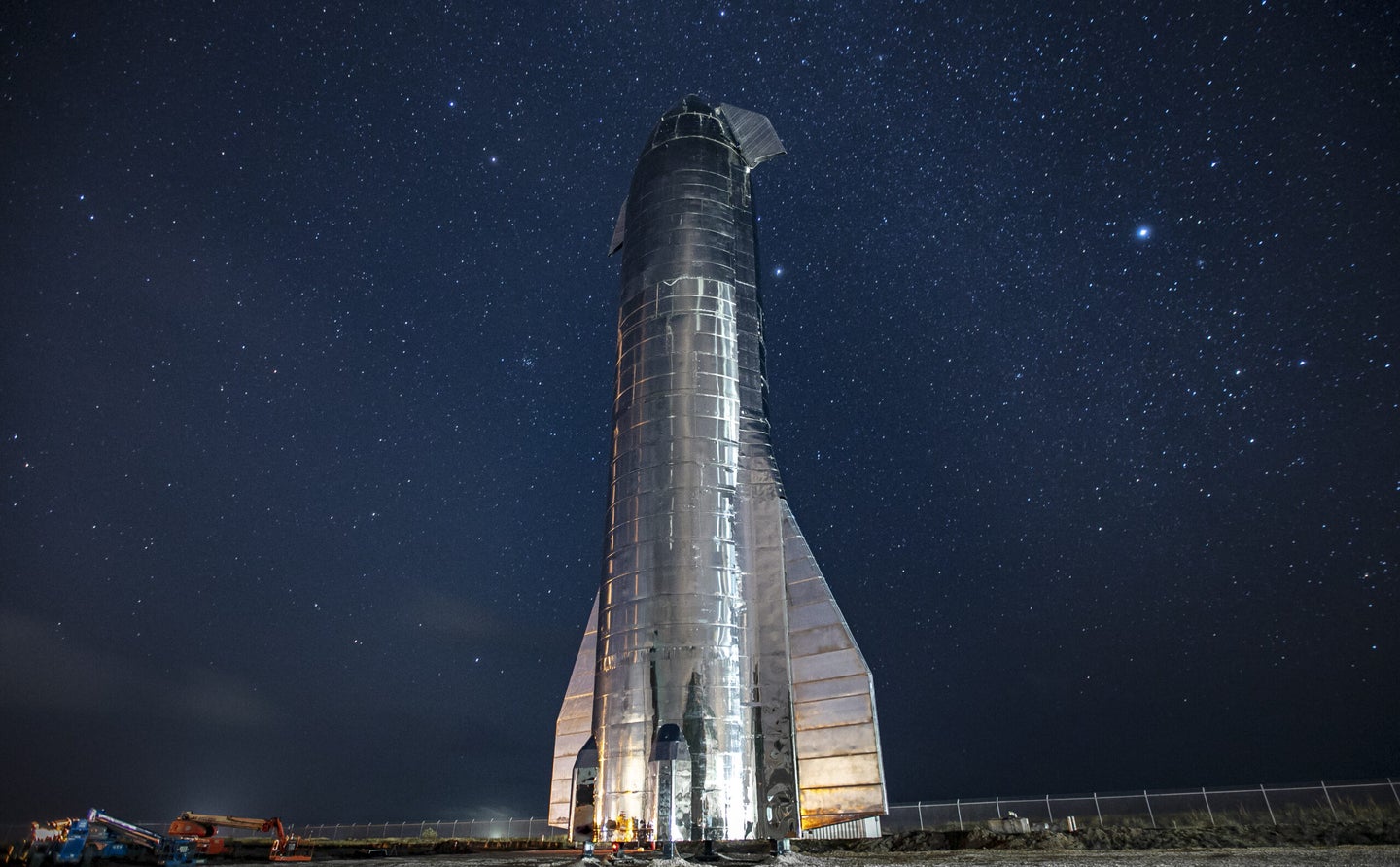 Elon Musk wants people to live on Mars, and now he has the “Starship” he’ll use to get them there—or at least a bare-bones prototype of it.

The SpaceX founder and CEO showed off a spotlight-illuminated spacecraft in Boca Chica, Texas on Saturday, celebrating the company’s progress and laying out his vision for its future. To Musk’s left stood a Falcon 1, the rocket that solidified the company’s place in the new space race when it first reached orbit 11 years ago. Looking forward, Musk insisted Starship’s complete reusability would be the key to opening up the final frontier.

“Which future do you want,” Musk asked the crowd. “The future where we are a spacefaring civilization, out there among the stars, or one where we are forever confined to Earth?”

The Starship “Mark 1” prototype stands 164 feet tall, measures 30 feet across, and looks like what a kid might sketch if you asked them to draw a spaceship. Although original designs from 2016 (back when the vehicle was called the “Interplanetary Transport System”) called for carbon fiber construction, on Saturday Musk touted the switch to steel for the old-school material’s strength in both the icy depths of space and the inferno of reentry into Earth’s atmosphere. Coming in at just two percent the price of high-tech composite materials, steel is also easy to work with. SpaceX welded the Mark 1 outside in the elements (Musk was in too much of a hurry to erect buildings for fabrication), a flexibility that might come in handy elsewhere. “On Mars, you can cut that up. You can weld it. You can modify it no problem,” Musk said. “I’m in love with steel.”

The Mark 1 features three Raptor engines (future Starships will have six), which Musk says will provide enough juice to take off from the surface of the Moon or Mars. But the silver rocket will need a lot more help to fully escape Earth’s formidable gravitational pull. Just as the Crew Dragon capsule sits on top of a Falcon 9 rocket, and the Apollo lunar module perched atop a Saturn V, Starship could someday hitch a ride to orbit on a large booster, currently dubbed the Super Heavy. SpaceX hopes to start building the booster, which is about 60 feet taller than Starship itself, after flight testing a handful of Starship prototypes. The main challenge, Musk said, will be building the 24 to 31 Raptor engines needed to power each booster.

Both parts will be fully reusable, returning to Earth for soft landings as SpaceX has increasingly done with more of its Falcon 9 rocket parts in recent years. By keeping the machines as simple as possible, Musk hopes to keep maintenance low, letting launch costs stay close to the price of refueling the vehicles.

But first SpaceX will see how the Starship prototype flies, and Musk, often chided for his self-described “aspirational timelines,” wants to move quickly. The first hurdle will be a controlled hop, similar to recent test flights of the Raptor engine, but higher. Musk mentioned 65,000 feet as a target altitude to hit in the next few months. “It’s going to be pretty epic to watch that thing take off and come back,” he said.

SpaceX will continue to build additional prototypes at its Boca Chica and Cape Canaveral facilities. The fourth or fifth iteration will attempt the next major milestone: orbiting Earth and returning to the ground. Musk said he was targeting an orbital flight in the next six to nine months, though he admitted the timeline sounded a little wild. Building the Mark 1 took four or five months, he said, and future iterations could come even faster.

Musk went on to paint a picture of the full Starship system, which he says will be able to ship 150 tons of science experiments, people, building materials, food, and other necessities to orbit. After refueling there, it could then land the same payload on the surface of the moon or Mars. Doing some on-the-spot figuring, Musk ballparked the cargo capacity of a theoretical fleet of ten Starships, each launching at an optimistic three times per day, at around 1,000-times greater than what humanity can currently put in orbit. “You need that if you want to build a city on Mars,” he said.

Given SpaceX’s track record, its capable scientists very well may build a launch system resembling the one they’re promising. But building a liveable Martian city—much less a thriving one—will take more than dumping millions of tons of cement and glass onto the Red Planet’s surface. Musk received two questions about SpaceX’s plans for life support, but gave little indication that the company is actively working on the question of how to keep a million mouths fed, watered, and breathing on a Mars settlement. “Relative to the spacecraft itself,” Musk said, “that’s not super hard.”

The International Space Station (ISS) does make and recycle what it can, but it still relies on regular supply shipments from Earth. A Martian settlement would have to go farther in recreating a mini-ecosystem, capable of producing its own food and water and purifying its own air, due to the vast distance. Experiments on Earth have revealed just how difficult it will be to find stability. Arizona is home to the Biosphere 2 facility, for instance, which hosted a number of high profile, closed-ecosystem experiments in the 1990s. One problem, researchers later realized, was that uncured cement conspired with a surprising abundance of soil microbes to throw off carbon dioxide and oxygen levels.

Even though the ISS doesn’t have nearly as much dirt or greenery as Biosphere 2, astronauts there also struggle to deal with fallout from unwanted hitchhikers. A tube for urine control, for instance, becomes so overgrown with bacteria that astronauts need to replace it every few weeks, according to John Rummel, a biologist with the SETI institute and past Planetary Protection Officer for NASA. “Earth microbes run the space station now,” he says, “and we just try to keep ahead of them.”

Getting off the planet may be rocket science, but living off the planet will require significant advances in biology and microbiology too. And SpaceX may already be getting a taste of how hard working in that intersection can be. While its rocket fleet racks up new flights, landings, and commercial contracts, its efforts to ferry humans to the ISS languish years behind schedule—a fact NASA administrator Jim Bridenstine lamented on Twitter before Saturday’s presentation.

Musk attributed the delay to the challenges in optimizing production, commenting that despite the speed of the Starship prototyping, its development takes less than five percent of SpaceX’s resources. The fact that competitor Boeing has experienced nearly identical struggles meeting the same timeline further emphasizes the difficulties of crewed spaceflight.

Despite the challenges, Musk remains optimistic that humanity’s future lies in space and stresses that while getting to Mars won’t solve Earth’s numerous and immediate crises, he finds inspirational value in dreaming big. “There are so many things to be concerned about, so many troubles. These are important and we need to solve them. But we also need things that make us excited to wake up in the morning,” he said, “and space exploration is one of those things.”