The Apollo moon rocks continue to reveal secrets of the cosmos

Apollo 11 gave us the Rosetta Stone of our solar system’s history. 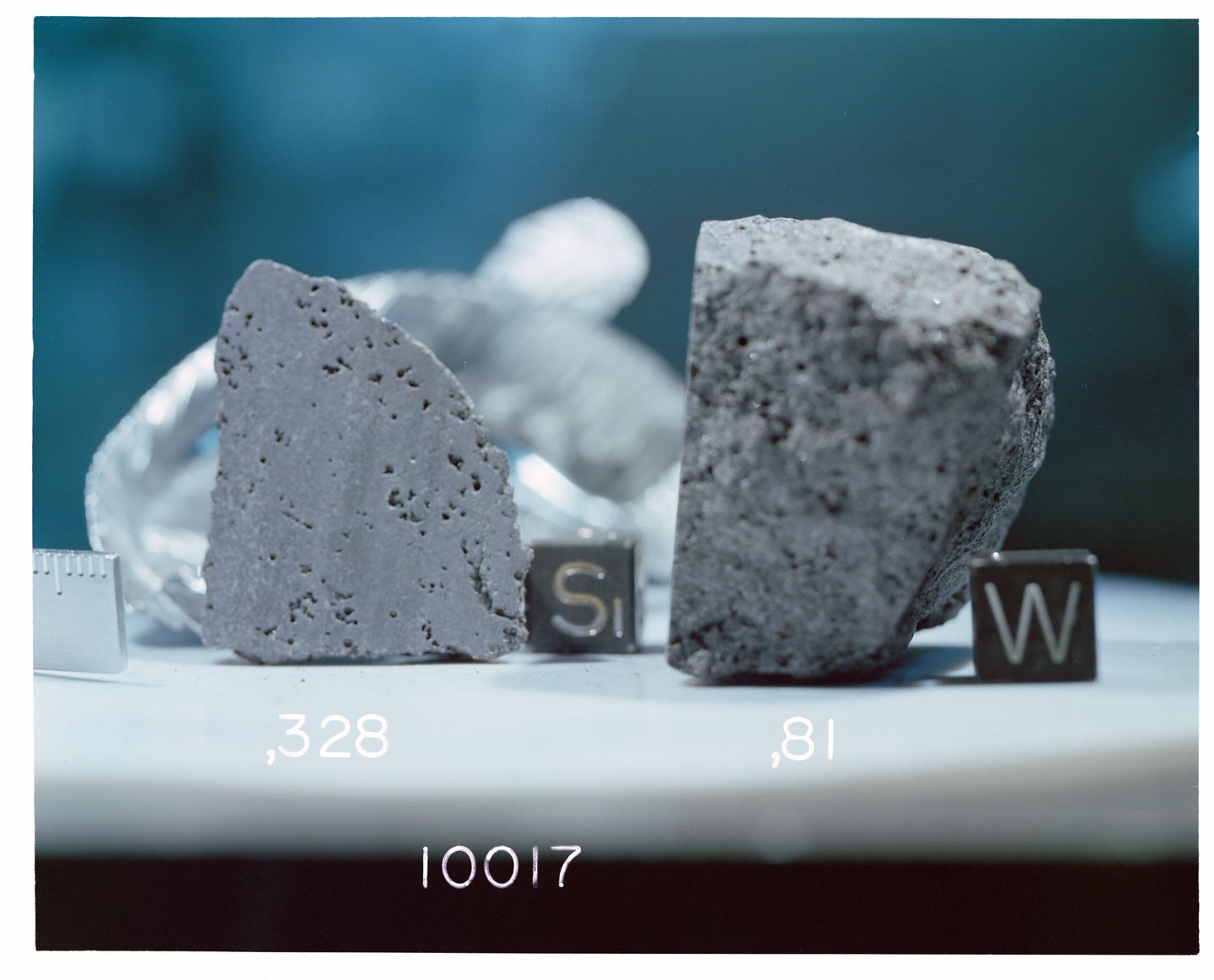 Toward the end of their two-hour moon trek, Astronauts Neil Armstrong and Edwin Aldrin hurried to gather about 48 pounds of lunar rocks and dust in 20 minutes.

Some 240,000 miles below, earthbound researchers waited on a soon-to-be fulfilled fantasy: the opportunity to subject lunar samples to every known chemical, geological, physical, and biological test available.

Over the course of six Apollo missions—the first of which celebrates its 50-year anniversary this week—astronauts retrieved 842 pounds of sand, dust, rocks, and core samples from the moon.

They make for unconventional souvenirs, but the Apollo samples collected from 1969 to 1972 are a gift to science that keeps giving. Over half a century, they had divulged secrets about the history of the moon, Earth, and inner solar system—as well as inspired and demanded technological developments with applications for engineering, astrobiology, and medicine.

When you have the samples in hand, you can run a battery of lab experiments, says geochemist Richard Carlson, of the Carnegie Institution for Science in D.C. “You can analyze every single grain in that sample and learn a vast amount of information.”

In the years leading up to the first Apollo mission, lunar geology was more or less at a standstill, restricted to hypotheses based on faraway observations. “No conclusions can be drawn other than that the interpretation of the existing experimental data leads to many ambiguities,” a 1967 USGA report notes.

The bits of moon brought down to Earth changed all of that, says Denton Ebel, a geologist and curator for the American Museum of Natural History in New York, which houses three moon rocks of its own.

“The moon is a Rosetta Stone,” Ebel says. “These rocks keep giving up new secrets.”

Here’s some of what we’ve learned from 110,000 individually-catalogued geologic Apollo samples.

The moon is not made from cheese, but its rocky surface has melted several times

Galileo launched lunar science in 1609 when he pointed his telescope at the celestial body and witnessed it with greater magnification (20x that of the human eye) than any person had before. What he saw was far from the perfect sphere we believed the moon to be at the time. Instead, Galileo observed a mottled surface pocked and peaked with mountains and valleys.

For centuries after, scientists speculated about what the moon’s craggy surface signaled about its origins. Some theorized that the moon, like Earth, had once been a scene of intense volcanic activity that turned it “into an overcooked cinder, forming the Moon’s craters in the process.” Others proposed that our satellite was a cold object that slowly accumulated mass, and that its visible features were the product of meteorite bombardment. The first samples that came back instead indicated a hot, violent lunar origin.

Analyses showed four basic groups of rock in the Apollo 11 samples— including two types determined to be volcanic in origin, space journalist Anthony Young writes in his 2017 book The Apollo Lunar Samples Collection Analysis and Results.

We now know the moon is (sadly!) not made not of cheese. Instead, it is comprised of rocky material that has been “variously melted, erupted through volcanoes, and crushed by meteorite impacts,” Young writes.

Early in its history, the moon was a melty, vast, and deep magma ocean. Its highlands were formed some 4.4 billion years ago by rocks that floated to the surface of this roiling sea. Over time, meteors bashed the ancient floating crust, shaping mountain ranges and creating basins as spewing lunar volcanoes produced “deposits of orange and emerald-green glass beads,” Young writes.

Today, the moon has a 37-mile-thick crust cradled by a rigid layer that overlies a softer, viscous interior. Researchers are still determining whether a small, molten, iron core lies even deeper inside.

The Earth and the moon might be fraternal twins (sort of)

By comparing lunar and terrestrial rocks, researchers discovered that the moon’s composition is similar to Earth’s mantle, and that the two bodies are made up of different ratios of a common ledger of elements.

“It’s made out of the same stuff as the earth,” says Carlson, who published a paper this week in Science about lunar samples.

Scientists believe the moon formed when a Mars-sized planetary body smashed into Earth, flinging off bits of crust and mantle that coalesced in the our orbit to become the moon.

“So you end up with the moon without a single crater on its surface. It basically started from scratch,” Carlson says.

There are no lifeforms on the moon

Alas, despite centuries of imagination to the contrary, the moon can’t support life.

Extensive tests have failed to reveal any traces of living organisms, fossils, or native organic compounds.

Researchers have also concluded the moon mostly lacks water (its rocks were formed through processes that involved little to no moisture) and any it has comes in the form of ice. And while some studies suggest the possibility of ancient magnetic fields, none exist, to our knowledge, on the moon today.

Ongoing geological activity constantly overwrites the Earth’s history. Weather, ice, and rain erode rocks. Continents drift and smash into each other. Tectonic plates fold, melt, resurface, and repave. Any geological evidence of the planet’s birth is long gone because that crust is long-since recycled. That’s not the case on the moon, whose surface has endured relatively undisturbed.

“The whole history of the Earth is gone. You’ve got the first edition still on the moon,” Carlson says. “The Earth has the last five chapters of a 10-chapter book. The moon has the first five chapters.”

Because the moon lacks an atmosphere and geological activity, there is no wind, weather, or tectonic movement to wear down its features. Everything that makes contact with the moon is mummified—from endless meteorite impacts to the footprints left by the occasional human visitor.

Its youngest rocks are virtually as old as the Earth’s oldest rocks, Young writes. Sampling from the moon’s highlands suggest rocks there are nearly 4.4 billion years old (the Solar System is about 4.567 billion years old), making them excellent record-keepers of the sun’s history, which is embedded in the moon by energetic particles from solar radiation and cosmic rays. And by determining the absolute age of lunar craters, scientists have been able to put a time scale on the evolution of Mercury, Venus, and Mars

There’s still so much more to uncover

There, three layers of gloves separate pristine samples from human hands. Moon samples approved for research are sealed under high-purity nitrogen before their lending. To safeguard the facility against hurricanes, its storage vaults tower above storm-surge sea levels. These precautions, among many others, protect moon rocks for about 100 annual visitors and allow investigators around the world to receive about 500 samples each year.

NASA still has around 85 percent of the Apollo program’s lunar sample collection, according to Space.com.

This March, the space agency announced it would unseal pieces of the Moon that have been untouched and unexposed to Earth’s atmosphere for nearly half a century, allowing nine science teams to study samples taken in Apollo missions 15, 16, and 17.

“These samples were deliberately saved so we can take advantage of today’s more advanced and sophisticated technology to answer questions we didn’t know we needed to ask,” said Lori Glaze, acting director of NASA’s Planetary Science Division in Washington, DC., in a press release.

Other modern sample missions—of asteroids, like the Hayabusaor OSIRIS-REx, of solar wind, like Genesis, or of comets, like Stardust—were grounded in what we’ve learned from the Apollo collections, Ebel says.

“We learned how to analyze those samples by studying, in particular, lunar rocks,” he says.