Ancient supernovas may have pierced moon rocks with star shrapnel

Apollo souvenirs just might have recorded the death throes of local stars. 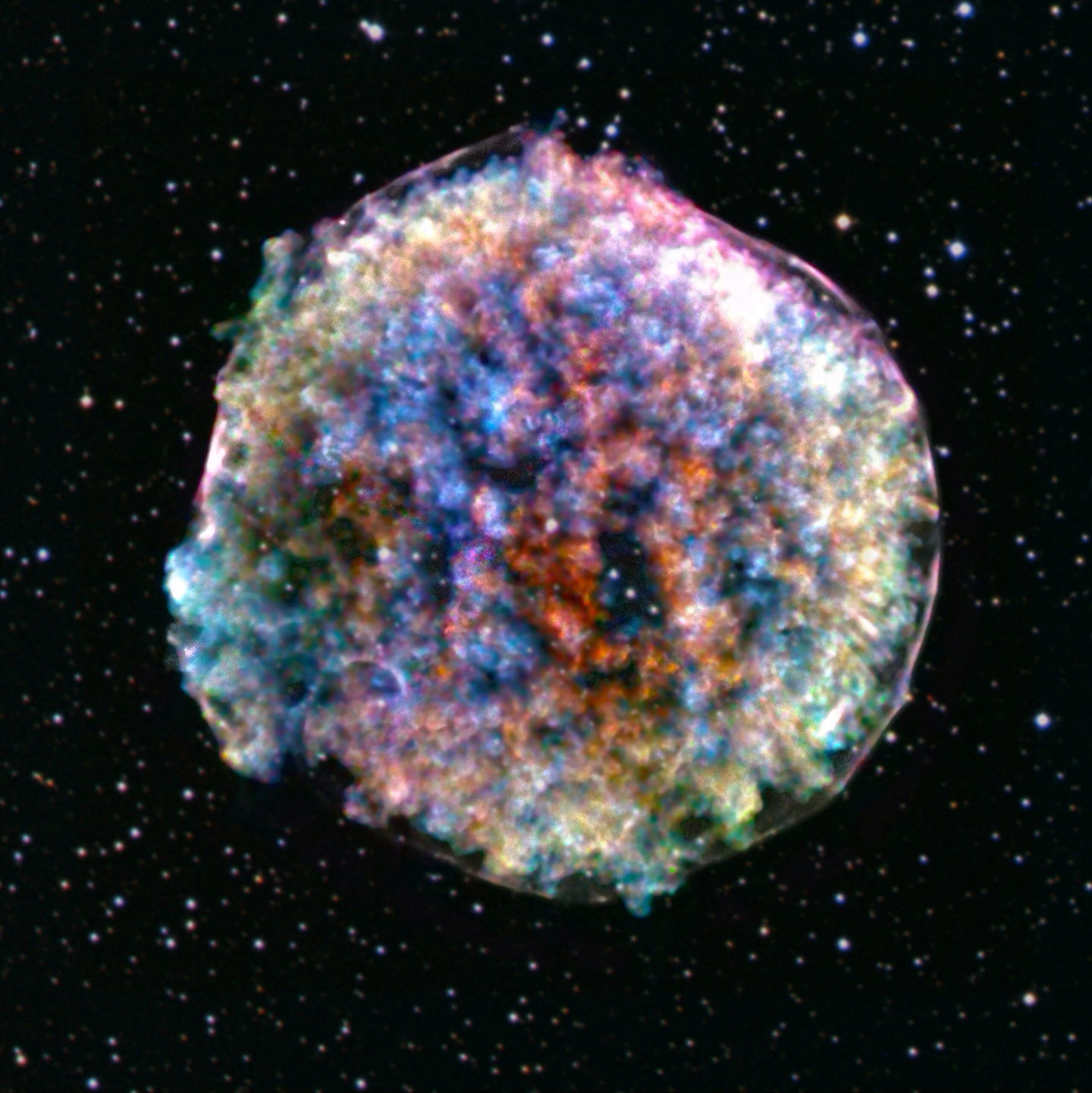 Astronomers usually mine starlight for information. Flickers in the light that reaches earth regularly unveil new vignettes of distant systems—such as a muggy alien atmosphere, a pulsating stellar bulge, and a dead star snacking on an ice world.

But alien sunbeams are not the only type of interstellar messenger. At least two comet-like objects have made their way to our solar system, and naked cores of atoms rain down upon our heads daily in the form of cosmic rays. Now, in a not-yet-peer-reviewed preprint, two researchers are proposing that signs of another cosmic connection could lie undetected in labs and museums around the world. Exploding stars could, according to their results, have expelled bursts of dust particles that rocketed across the Milky Way, eventually burying themselves in lunar rocks. If they’re right, careful examination of either rocks on the moon or those the Apollo astronauts brought back to Earth could lead to a deeper understanding of how stars live and die.

“We didn’t expect anything to come out of this initial calculation,” says Amir Siraj, a co-author and undergraduate at Harvard University. “And we ended up finding that this actually may be possible.”

Siraj has been thinking a lot about physical connections between Earth and the cosmic environment recently. This spring he and his collaborator Avi Loeb, an astrophysicist at Harvard, published pre-prints suggesting both that an interstellar meteor may have hit our planet in 2014 and that interstellar dust grains could be lighting up the night sky.

In their most recent paper, which they have submitted to The Astrophysical Journal Letters and published on the pre-print server arXiv, they take their supernova dust reasoning in a new direction. Could such stardust definitely reach Earth, they asked, and where else might it show up?

When certain types of stars run out of fuel, they undergo violent explosions known as supernovae. The explosion expels material directly, but modeling that chaos is complicated. Siraj and Loeb instead focused on the fact that supernovae can shine with the brightness of 100 million suns. When that floodlight switches on, it blasts any dust surrounding the star outward into space.

“Supernovae are some of the most extreme cosmic events,” Siraj says. They can accelerate grains of dust up to one percent of the speed of light, which is 100 times faster than a conventional rocket.”

Not just any supernova could push dust all the way to Earth though. Slowly moving dust wouldn’t get far, slamming into other particles and quickly coming to a halt. And the fastest dust grains would self-destruct, rubbing against neighboring particles like wool socks on a fuzzy rug until they static-shocked themselves into pieces. Only stellar explosions within about 800 light years of Earth (roughly 1 percent of the width of the Milky Way) should be able to send out dust with the right range of speeds to reach our solar system, according to the researchers.

Such a supernova should take place once every hundred thousand years or so, peppering our solar system with innumerable specks of dust. Any particles reaching Earth would surely burn up in the atmosphere, but those that slam into the moon just might survive—not in the lunar dust, which gets churned up over the eons, but in surface rocks exposed directly to space.

Specifically, the pair proposes looking for deep and narrow holes punched into moon rocks by incoming dust particles. Lunar rocks show shallow pockmarks from micrometeorites on their surfaces, and researchers have detected atom-wide streaks left by cosmic rays. The speculative tubes drilled by supernova shrapnel would fall somewhere in between, Siraj says.

The astrophysicists aren’t the first to seek material connections between exploding stars and the Earth-moon system. In 2008, researchers suggested that a two million-year-old layer of iron atoms in the seafloor originated in a supernova. A group in 2015 analyzed quickly moving dust particles that could reach the moon, and assumed that they would vaporize upon impact.

That the energetic dust motes might burrow into rocks is probably a new idea, according to Ian Crawford, a lunar researcher at the University College London, but he cautions that the peer review process may change Siraj’s and Loeb’s conclusions. In particular, he said, they will need to explain why the particles wouldn’t necessarily break apart when they collide with lunar rocks at seven million miles per hour.

Siraj agrees that this assumption is one of the idea’s key uncertainties, but suggests that it might be worth examining some of Apollo’s haul regardless. He estimates that any given dime-sized patch of rock should feature a handful of dust trails, so a low-cost study of a few rocks could discover something either way. If such a search comes up empty, that result would tell researchers something about speedy dust particles, lunar erosion, or assumed supernova rates.

And if researchers do find traces of interstellar dust, they could use them to nail down a host of uncertain supernova properties. Apollo rocks make up a limited, jumbled up sample, but on future moon missions scientists could survey pristine rocks for such signs. Counting the number of dust holes would let researchers estimate a particular explosion’s brightness, for instance. Or, many holes all facing the same direction could even hint at where in the Milky Way they came from, Siraj speculates.

“It would be very exciting,” he says, “because it would allow us to probe the nearby supernovae history in a way that we just couldn’t otherwise.”