The Apollo 11 mission as told through the astronauts’ heart rates

This is what happened with the three men's tickers during critical moments of the journey. 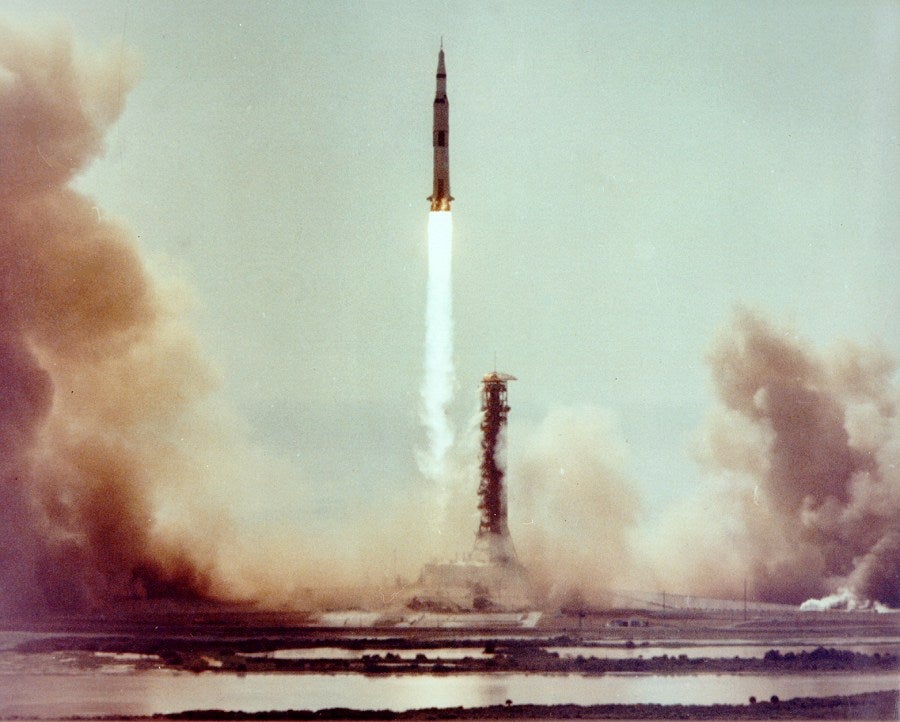 When Neil Armstrong, Micheal Collins and Buzz Aldrin blasted off on their journey to the moon, they were riding atop a 363-foot-tall rocket that produced 7.6 million pounds of thrust. The mission was hazardous and full of unknowns. And yet their heart rates during the launch stayed reasonably normal: Armstrong’s was the highest, at 110 beats per minute, Collins’ was 99, and Aldrin’s a low 88.

Those heart rate figures are what aerospace experts would expect to see for experienced, physically fit astronauts enduring the stresses of the launch. All three had flown to space before, during the Gemini program, and during that first launch, all three of their beating hearts had hit higher numbers.

On the Apollo 11 blastoff, “Neil Armstong’s rate was a little higher than everybody else’s, because he’s in charge of everything—you expect his adrenaline to be up,” reflects Dr. Ed Powers, the director of the aerospace medicine residency program at the University of Texas Medical Branch and a former NASA flight surgeon during the Shuttle era. “He’s the guy ultimately responsible for flipping all the switches required for launch—I would be surprised if his heart rate wasn’t higher than the others.”

During that climb away from Florida, the three men felt a maximum of four Gs pushing them down—the equivalent of four times the force of Earth’s gravity. But their positions in the spacecraft—laying on their backs, their legs elevated—helped them tolerate those Gs. Had they been sitting straight up, with their heads aligned over their hearts vertically, the blood would have wanted to drain downwards, spurring their hearts to beat faster to keep blood in their brains. Managing those Gs is a serious concern for modern-day fighter pilots, who sit in a chair-like position as they fly high-performance jets.

Overall, throughout the entire mission, all three men’s average heart rates were normal, according to the biomedical portion of the Apollo 11 report: Armstong’s stayed highest at 71, Collins’ was 60, and Aldrin’s was 67. Compare that with the typical heart rate of a person walking around on Earth, which ranges from between 60 to 100, according to Powers. That means that even during launch, both Collins’ and Aldrin’s hearts were beating at the same rate yours might be as you just amble about your normal life.

The dicey moon landing itself, as Armstrong manually flew the lunar lander, saw his heart rate climb up to 150 beats per minute, then come back down again in the seconds after they’d completed their historic touchdown. While performing that first-ever landing, the lower their altitude got to the lunar surface—first 2,000 feet away, then 1,000 feet—the higher his heart rate climbed, until hitting a plateau for about one second at 150 bpm.

“The adrenaline, fight-or-flight takes over, and the heart rate increases as he’s going through that critical phase of flight,” observes Dr. Cheryl Lowry, an associate professor at the University of Texas Medical Branch in Galveston. “Then his heart rate rapidly decreases after he’s got the ‘go to stay’—we can see a rapid drop-off, where his comfort level increases and he’s back down to normal in no time.” While it was a maneuver he’d practiced for, it was, of course, the first time he’d done it—or any other human had executed it—for real.

In fact, the final minutes of the landing sequence were hectic. “The onboard computers were overloaded, and alarms were going off,” Powers recalls. Add to that the fact that all of their communications with the Earth had a three-second delay, nor did they have a bottomless fuel tank, of course. “They got really, really low on fuel, and everybody knew it.” When he finally landed it, they had less than 20 seconds of fuel remaining.

Another factor: Armstrong was flying the lander while standing up, and as they landed on the moon, they would have felt the effects of its gravity—one-sixth the amount of pull the Earth has, but still more than they were accustomed to from their days in space. That added physiological stressor could have caused their hearts to beat faster.

Armstong’s heart beat even faster than the moment of landing while actually exploring the moon, especially in the final moments when his activities included, as described by NASA, “documented sample collection” and “transfer sample return containers.” His average was 110 bpm throughout the EVA, but spiked up to around 160 at the end. Aldrin’s average was 88.

Bouncing around the moon seems like it might have been easy, but Powers notes that a 2006 summit with Apollo-era astronauts turned up recommendations for better spacesuits. “They had to work against the suits,” Powers recalls. “They recommended suits that were more pliable, because it used up a lot of energy as they were trying to get their stuff done.” The astronauts also wanted gloves that allow for more dexterity.