Omegas were the alphas of the US space program. 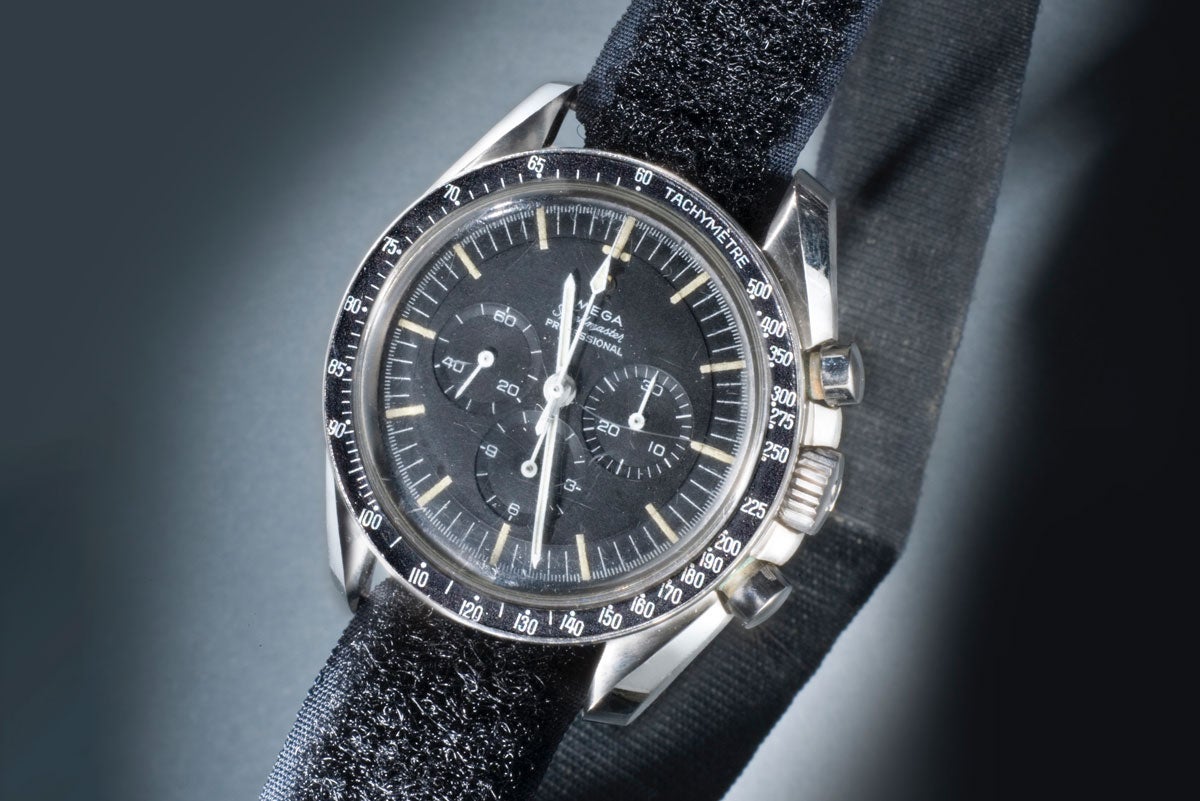 This year marked the fiftieth anniversary of the first time people set foot on Earth’s moon. Half a century later, we’re still captivated by the details of that event, from the mysteries that still remain since we’ve landed, to the equipment and gear that made it possible. For example: Buzz Aldrin wore a watch on the outside of his spacesuit as he strode across the moon, and like astronauts before and after him, that watch was an Omega Speedmaster.

It’s a detail that sticks with people—and that Omega has certainly capitalized on in its marketing—in part because watches are so familiar for the rest of us. And what’s more rugged than a watch that can handle the vacuum of space? The Omega Speedmaster Moonwatch, as it’s now known, remains the only timepiece to meet NASA’s call, in the mid-1960s, for a mechanical chronograph that could endure 12 Gs of acceleration (that’s a lot—here’s what pulling 6 Gs feels like) and temperatures up to 200 degrees Fahrenheit. It remains the only watch certified by the agency for astronauts to wear on EVAs, on the moon or in open space.

Small equipment like watches destined for space may be fascinating, but it was never the space agency’s top concern, says Jennifer K. Levasseur, a curator in the space history department at the Smithsonian National Air and Space Museum. “NASA number-one priority in putting people into space was to make the spacecraft operable, [and] to make it safe,” she says. The early days of the Mercury program, when it came to small gear or details like how an astronaut might consume food in space, represented what Levasseur describes as an “ad hoc, experimental phase.”

When Alan Shepard and Gus Grissom blasted into space on suborbital flights in 1961, “there [was] nothing extra added to those missions,” she says. In short: NASA wasn’t thinking deeply about watch certification yet.

As the Mercury program ended and Gemini began, NASA knew more about sending people to space, and engineer Jim Ragan received the job of certifying a watch for spaceflight in 1964. The result, after considering candidates from four companies, was a stamp of approval in 1965 for the Omega Speedmaster chronograph watch. (The chronograph designation means the timepiece has a stopwatch function.)

“The Rolex and Longines basically crapped out on the first test,” Ragan told The New York Times for part of an oral history of the moon watch. “We did 11 environmental tests, and I just had to hope the Omega made it through the rest. It did, and the astronauts preferred the Omega, too.”

Omegas aren’t the only brand to have launched into space: John Glenn wore a Heuer for his orbital flight in 1962, and astronauts have donned Casio watches inside spacecraft. Another Omega Speedmaster watch, the X-33, was a new creation in 1998 and featured a digital display—it flew during the Shuttle years. Today, astronauts leaving the International Space Station on EVAs don’t wear watches, according to NASA.

The Omega space watches had Hesalite crystals—the transparent window over the dial—which don’t shatter in a dangerous, glass-shard-like way as modern sapphire crystals do, a big benefit in a spacecraft.

The goal of the watches was to introduce a system of redundancy, Levasseur says: spacecraft themselves have mission timers, but a chronograph on the arm, whether astronauts are inside or outside, gives them another option for time-keeping. For example, the stopwatch function came in handy for the astronauts on Apollo 13 who needed to time engine burns. On the moon landing itself, Neil Armstrong left his in the lunar lander as a backup for a malfunctioning timer. And astronaut Gene Cernan went all out with timepieces on Apollo 17: a photo reveals him wearing three watches, all at once, Levasseur points out.

So why do we care about space watches so much? For one thing, it’s an item most of us can relate to—unlike, say, a spacesuit, watches are an everyday item regular people wear to mark time. With spaceflight, Levasseur says, “The watch becomes symbolic of the precision.”

Levasseur notes that she gets more questions about the 65 watches in her collection than the other 2,000-plus items, which includes stuff like cameras, communications headsets, and space food. “Knowing that that was a part of their gear, when they were stepping on the moon, or doing a spacewalk, it means a lot,” she says.

A version of this story originally published in the Out There issue of Popular Science.